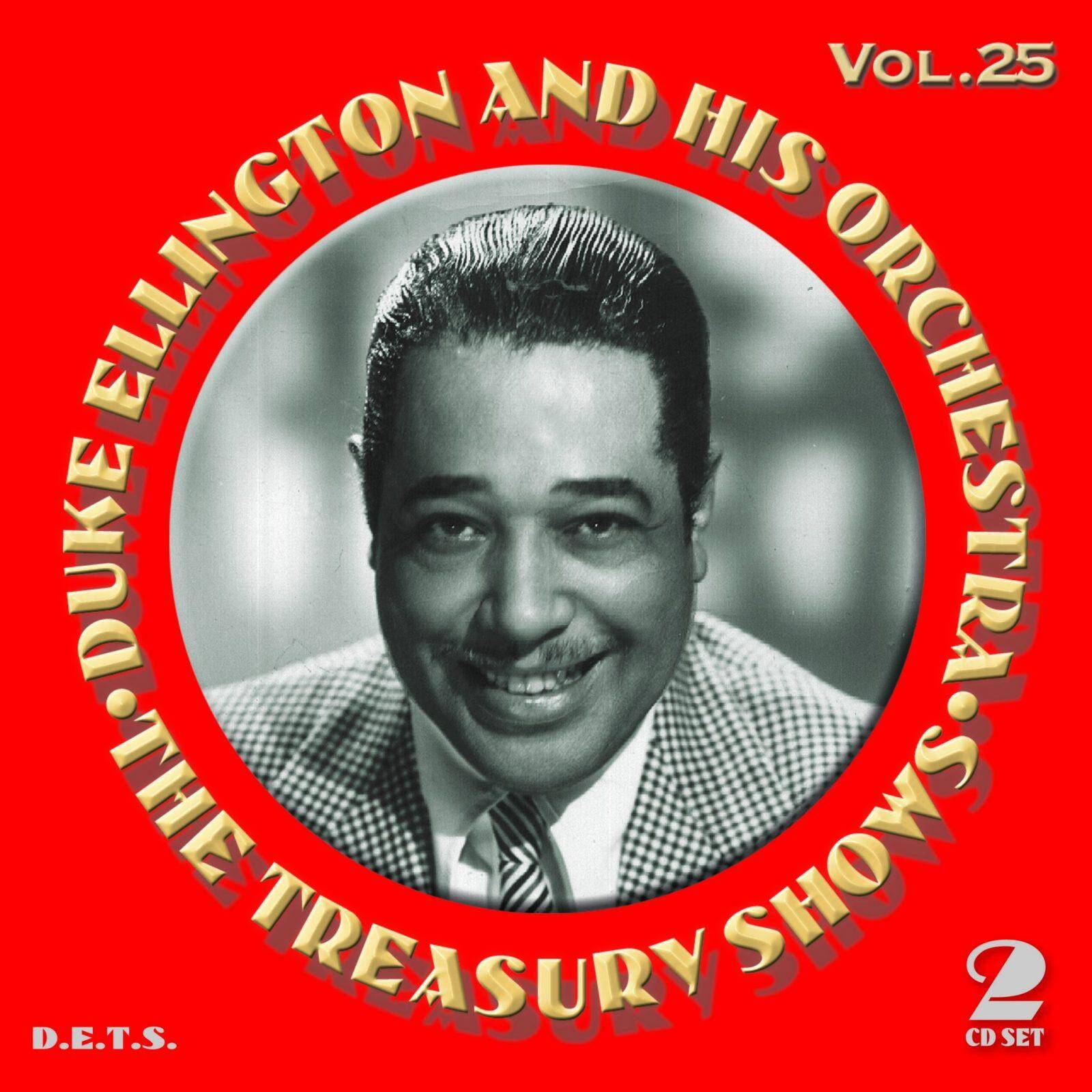 Duke Ellington and his orchestra were featured on a series of weekly radio programs during 1945-46 that became known as The Treasury Shows. While the commercial purpose was to sell war (and later victory) treasury bonds, the 55-minute programs gave Ellington an opportunity to perform suites, his hits, standards, and some unlikely material, mostly without any interruption. The shows, which have very good sound quality, survived and were made available in the 1980s by Jerry Valburn on his Meritt label. Valburn released 48 LPs in all, with the last couple featuring other rare broadcasts from 1953.

The Storyville label for their D.E.T.S. subsidiary has reissued all of the programs on 25 two-CD sets. In addition to containing two radio shows, each twofer also includes briefer (and sometimes previously unreleased) broadcasts that are mostly from the 1943-44 period and often taken from Ellington’s extended engagements at the Hurricane Club in New York.

Vol. 25 has recently been released, completing this very valuable series. Included on this set are a nine-song broadcast from June 1953 (only previously available on a Meritt “bonus” album) plus four shorter radio programs from the Hurricane Club during 1943-44 that are mostly being released for the first time.

Although some think of Ellington as being in an off period during 1952-54 when Johnny Hodges was temporarily out of the band (leading his own combo), Duke had no less than ten significant soloists in his orchestra at the time, not counting the pianist; most big bands have three or four. Among the highlights of this broadcast are “Boodah” (featuring cornetist Ray Nance, clarinetist Jimmy Hamilton, and the high-note trumpet of Cat Anderson), baritonist Harry Carney’s showcase on “Frustration,” “Duet” (which puts the spotlight on Hamilton and bassist Wendell Marshall), the uptempo “Ballin’ The Blues” (which has spots for trumpeter Clark Terry, Jimmy Hamilton on tenor, and the singing of Jimmy Grissom) and a rambunctious version of “Basin Street Blues” featuring a Dixieland frontline (Terry, clarinetist Russell Procope, trombonist Quentin Jackson, and Ray Nance on vocals and a Louis Armstrong-inspired cornet solo) taken from Ellington’s big band. This was an off period?

The 1943-44 band (which “only” had nine main soloists) explores many moods during its four broadcasts. Featured along the way are Nance (on violin in addition to cornet), cornetist Rex Stewart, trumpeter Taft Jordan, Jimmy Hamilton, altoist Johnny Hodges, trombonists Tricky Sam Nanton and Lawrence Brown, and the great tenor Ben Webster, plus vocals from Al Hibbler and Betty Roche.

True Duke Ellington fans, collectors and fanatics will have to get all 25 volumes of this memorable series. Congratulations are due Storyville for seeing this very extensive program to its completion.

This review is part of Nights at the Turntable October 2018