Earl Scheelar to be Honored at Cline Wine and Jazz Festival

This year’s Cline Wine and Dixieland Jazz Festival, to be held on July 13th, will honor veteran musician and promotor Earl Scheer. Scheelar is a bandleader and multi-instrumentalist who has led Bay Area revival jazz ensembles since the 1950s. A dedicated proponent of New Orleans Jazz, few transmit the Blues on cornet or clarinet with greater conviction and eloquence.

A self-taught musician, Scheelar’s technique and personal style are distinctive. His Johnny Dodds-inflected clarinet style provides steady support for any ensemble. His cornet tone is passionate and he’s always ready with a piquant solo or moving chorus of the Blues on either instrument. Earl also plays or has played banjo, soprano and alto saxophones, baritone horn and tuba. He sings and formerly played guitar and country fiddle.

Though never a full-time professional musician, Scheelar has maintained an unbroken series of jazz bands since the mid-1960s. He moved to the Bay Area from the Northwest in 1950 drawn by the thriving Traditional Jazz scene and is proud to have heard the Watters’ Yerba Buena Jazz Band at Hambone Kelly’s. Surprisingly, despite his broad musical proficiency Earl was never a “reading musician.”

He deeply admired and loved reed player Bob Helm — the man and his music. For a half century they partnered in long stretches. Helm was integral to all of Scheelar’s bands including Funky New Orleans Jazz Band (the Herwin LP) and Zenith Jazz Band in the 1990s. 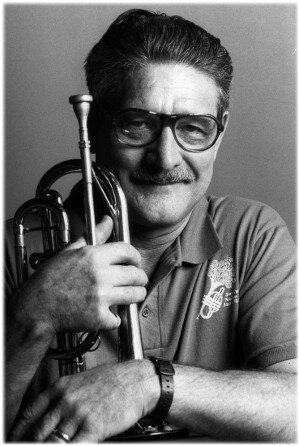 Scheelar and wife Alice bought a six unit apartment building in the French Quarter of New Orleans in 1989. Living there a few weeks per year until 2005 they were often joined by their friend Bob Helm, becoming good friends with Jacques Gauthe and sitting in at his jam sessions and gigs. Earl started a small foundation distributing musical instruments to local youngsters. His ensembles have always featured noteworthy New Orleans Jazz elements and style.

Those who have known Earl over the years will attest to his personal helpfulness, always eager to lend his talents as a craftsman, mechanic, businessman, musician or friend. Few have shown such fierce independence, leadership and dedication exploring classic Jazz music than Earl Scheelar, the Earl of Jazz.

To get the complete story read “Earl Scheelar Will Surprise You”, and hear some great audio clips of his bands. To see a great collection of pictures related to Earl look HERE.

A Chronology of Earl Scheelar’s Life in Jazz

Played with the bands of Frank Goulette in SF at The Honeybucket and in Original Inferior Jazz Band at Burp Hollow.

Earl’s New Orleans House and Jazz Band restaurant and dance hall; the jazz band was extant into the early 1970s.

Formation of Funky New Orleans Jazz Band and Herwin album (1971-72). Oxtot bands and jams at The Ordinary, The Point and casuals.

Dave Radlauer is a six-time award-winning radio broadcaster presenting early Jazz since 1982. His vast JAZZ RHYTHM website is a compendium of early jazz history and photos with some 500 hours of exclusive music, broadcasts, interviews and audio rarities. Radlauer is focused on telling the story of San Francisco Bay Area Revival Jazz. Preserving the memory of local legends, he is compiling, digitizing, interpreting and publishing their personal libraries of music, images, papers and ephemera to be conserved in the Dave Radlauer Jazz Collection at the Stanford University Library archives.