From the 2019 West Coast Ragtime Festival

Sometimes too much of a good thing is, well, too much. Such is the case with the West Coast Ragtime Festival, which I attended for the first time on November 22-24 at the Marriott Rancho Cordova in a suburb of Sacramento, California.

This festival was exceptionally well organized, a fact that became clear after I arrived. Prior to leaving home, I attempted to plan which sets I wanted to see. This entailed approximately five hours poring over the festival website, and even then I could not construct a complete schedule. Many of the performers were new to me, and I wanted to catch as many of them as possible, while at the same time not ignoring those I’ve known and liked for some years. Upon arriving, I picked up a large sheet showing the schedule in both grid form and by performer. The grid form was on the website, but if the performer list was also, I missed it. Having it would have greatly reduced the five hours I spent at home.

The hotel offers an excellent venue, with six rooms of varying sizes, all within the equivalent of a city-block walk. The seating capacity of these rooms varied from about 50 to 200. One large room had a dance floor set up. The largest room had two Steinway grand pianos on a raised stage, apparently provided through the good graces of Richard Dowling. The other rooms had smaller instruments, mainly Yamahas. For some sets, the assigned room could not hold the crowd, and due to fire regulations, standees were not admitted. The organizers could not reasonably have anticipated this in advance. This is another example of too much of a good thing. 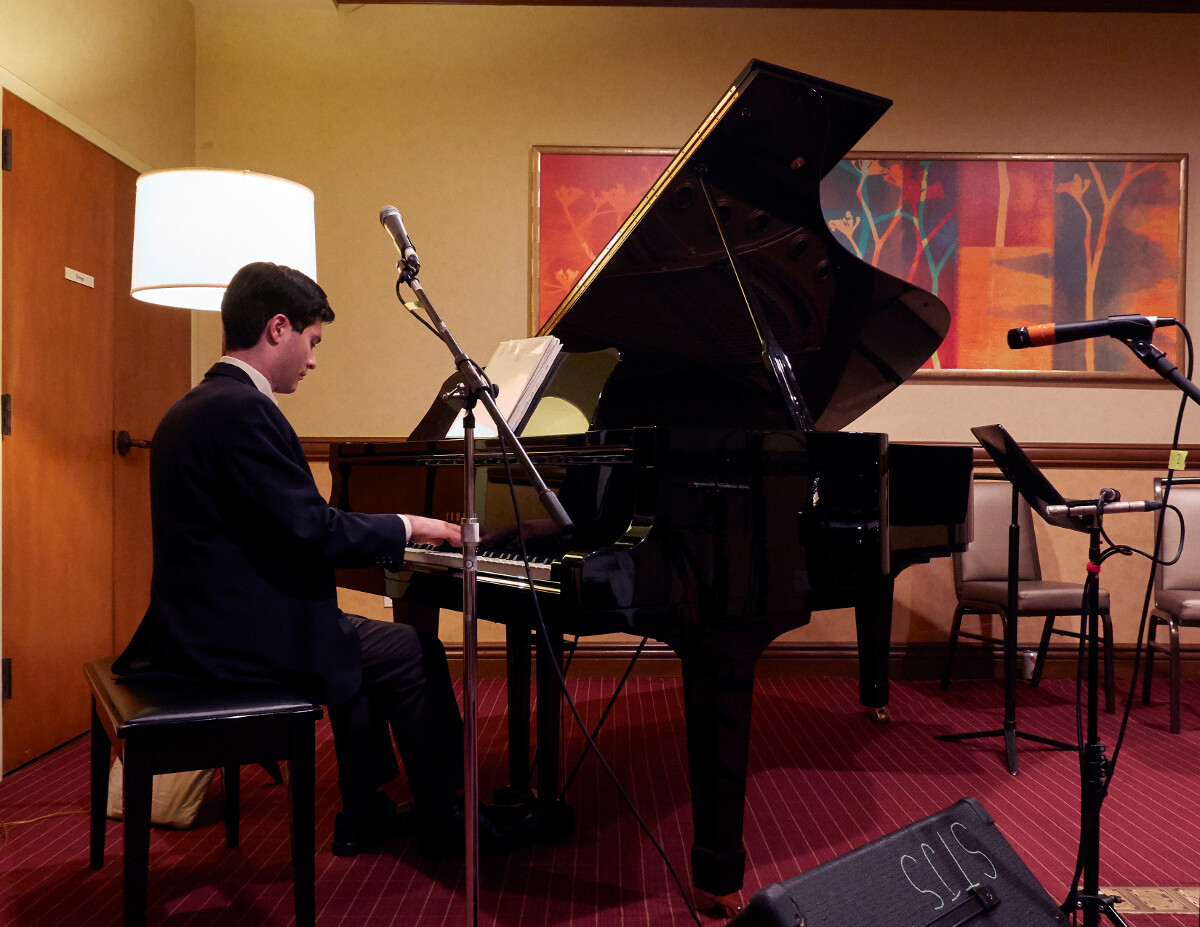 For attendees looking for lower-cost lodging, there are several other hotels within walking distance, along with a few restaurants. The Marriott has a restaurant but it’s somewhat pricey and was not taking reservations during the festival. The hotel did provide a food cart in the lobby for quick and less expensive fare, but the choices were very limited, not much more than “take it or leave it.” The Marriott is 100 yards from the light rail, which offers frequent service between downtown and Folsom that runs late enough in the evening so that people staying at more distant hotels or living locally can use it without leaving the festival before the last note sounds (but not late enough to allow one to attend the after-hours jam).

A very helpful feature in the larger rooms was a camera that showed the keyboard(s) so that anyone seated anywhere in the room could see the action.

The design of the festival program book mirrors that of the San Diego Jazz Festival that I attended a week later and for which I will have a report, probably next month. Both contain daily schedules, artist bios, a venue map and lists of festival directors, volunteers and donors.

One feature at WCRF that I have not seen at San Diego is a clock in each performance room, and a volunteer timekeeper to help stick to the schedule. A very useful feature of the SDJF that was missing here is a break between sets to allow for the stage to be reset for the next band and for patrons to walk to the next venue, use the restroom, or step outside for some fresh air. Several musicians as well as attendees made this comment to me. If one set ran over by a few minutes, that room could have been off-schedule the rest of the day unless a subsequent performer voluntarily shortened his or her set. This would eliminate walking into a room where the set had already started, thus disturbing the performer and the audience. It would also forestall having to miss a desired set because all the seats were already taken. One nice touch was the taping of pipe insulation on the doors to reduce the noise when opening and closing. Any time overruns might not have been the timekeeper’s fault. S/he held up a “5 minutes” sign at the appropriate time, but if the performer didn’t notice or failed to check the clock, that effort was wasted. 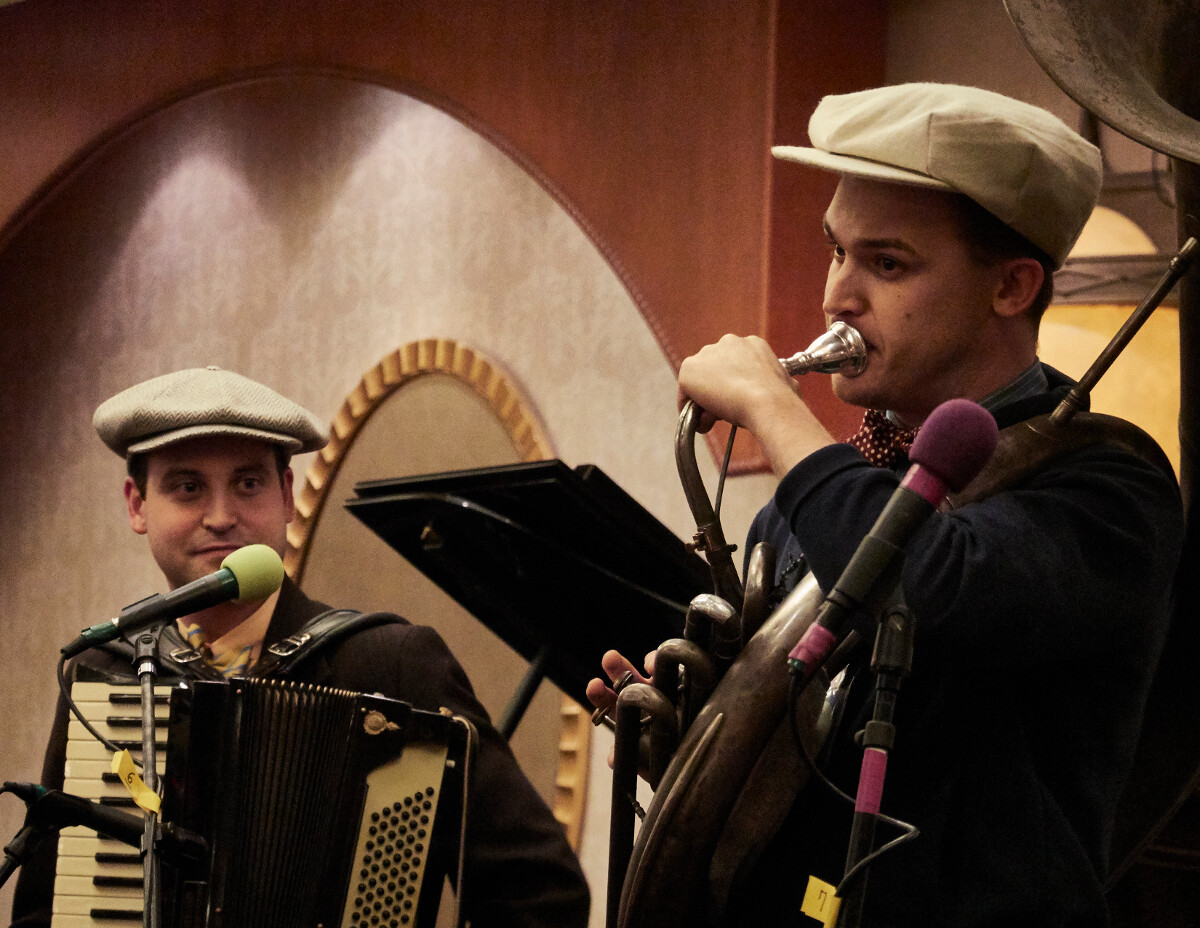 I counted at least 39 pianists on the card. There may have been a few others I did not see. Several nations were represented in addition to the US: Argentina (Ezequiel Palleja), Austria (Christoph Schmetterer and Martin Jaeger), and Sweden (Peter Lundberg). Several musicians were born overseas but now live in America: Damit Senanayake (Singapore), Larissa Migachyov (Russia), TJ Muller (England), and Donald Ryan (Trinidad). Pianists were not the only performers; there were several full bands and solo instrumentalists who, alternately accompanied pianists or had their own sets. Fully half the performers were new to me; I either did not know of them or did know but had never seen them.

In addition to the regular music sets, seminars and themed sets were presented. I did not get to all of these, but those I did see were excellent. Frederick Hodges played a set of Walter Donaldson’s tunes. He had plenty to choose from; Donaldson wrote over 600 pieces from about 1920 into the ’40s. As Donaldson is my favorite composer, I was not about to miss that one. Adam Swanson gave a very personal illustrated history of ragtime pianist and composer Johnny Maddox, who had died within the past year. Adam at age 12 met Johnny and they became close friends. He now owns much of Johnny’s memorabilia. A very educational “Women in Ragtime” seminar featured women playing solely compositions of women, nearly all of whom are in obscurity today. This seminar helped lift some of that obscurity. There were also silent movies with musical accompaniment, a youth master class that was open to all attendees, and dance instruction.

One way to get a jump on seeing as many musicians as possible was to take in the Festival Sampler on opening night, “Ragtime 1919” on Saturday, and the Finale, the last set on Sunday afternoon. I attended all three. These sets each featured at least a dozen performers, the Finale probably two dozen. It ran an hour longer than scheduled.

Up-and-coming pianists were by no means neglected. All exhibited great talent and deep knowledge of the repertoire, and they deserve a shout-out (in no particular order): Ramona Baker, age 18 (daughter of multi-instrumentalist Clint Baker, who was also here); Andrew Sacks, 16, who, it was reported, doesn’t read and played entirely from memory; Jade Anderson, 14; Diego Bustamante, 20; Oliver Moore, 18; Anthony Sarginson, 18; and Ryan Wishner, about 22. With people like these, the future of this music is in very capable hands.

As noted at the outset, there was a lot of the Festival that I did not, and could not, take advantage of. I don’t dance, so I didn’t attend any dance sets. But that meant I may have missed some good music. Silent movies with accompaniment are always entertaining, but they would have taken the place of pure music sets.

What I have not mentioned is which performers I liked best and which I liked less or didn’t care for. I’ll just say that all were good, and many were great. The roster will undoubtedly be somewhat different next year, but I saw enough greatness to convince me to return. It may not be next year or every year, but WCRF is now high on my radar.