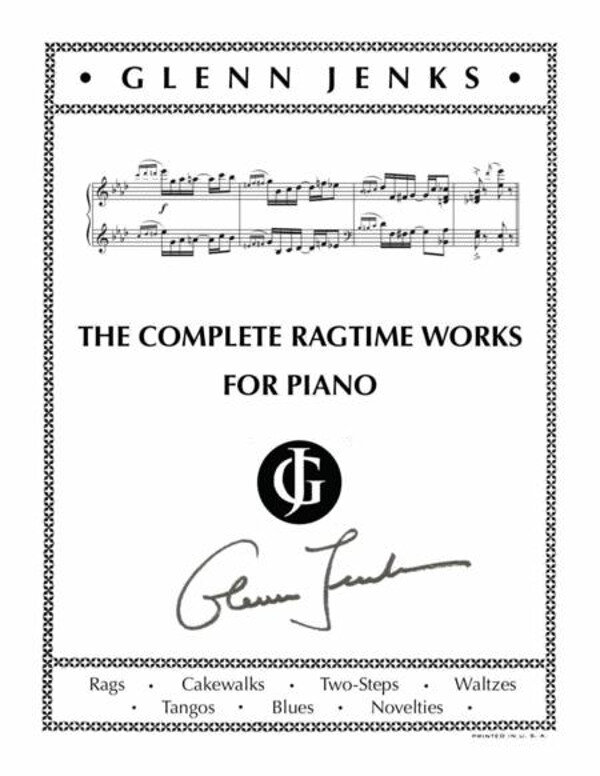 A few disclosures are in order. 1) Though the late Glenn Jenks (1947–2016) and I met only at ragtime festivals, we communicated occasionally by phone, mail, and email. 2) He dedicated one of his rags to me: Desdemona. My recount of how that dedication came about appears on page 261. 3) I, along with Wally Rose and Peter Lundberg, collaborated with him on Sedalia Joys, which is included in the addenda of this collection. Despite personal connections to Jenks, I endeavor to consider these rags objectively, basing my comments strictly on musical values.

What started Jenks on his ragtime journey? I don’t recall him ever speaking of his genesis in this area. His first rag composition is from 1972, when he was in his mid-twenties. That was before the movie The Sting (1973), which had transformed the slowly emerging Scott Joplin revival into a massive public phenomenon. But it was after the notable, best-selling Joplin recording by Joshua Rifkin, Piano Rags by Scott Joplin (Nonesuch H-71248, 1970) and the New York Public Library’s groundbreaking publication of The Collected Works of Scott Joplin (1971). Both were significant in my own ragtime journey.

Prior to examining this collection, I had read through and heard many of Jenks’s rags, but there are many more in this collection that were totally new to me. The collection’s main part is composed of 34 piano rags dating from 1972 to 2014. The addenda contain two rags written for guitar and the above-mentioned collaborative rag Sedalia Joys. The seven final pages have comments from those to whom several rags were dedicated.

Thinking about the course his ragtime journey took, I decided to begin my examination with a comparison of his first and last rags. Red Beard Rag (1972) told me immediately that though this was his first rag, it clearly does not appear to be a first effort at composition; it is far too sophisticated. Though Jenks follows much of the traditional ragtime format, this is not just an old-styled rag of recent vintage, so often the case with contemporary rags. It is full of surprises and deviations from what would have been expected during the original ragtime years, the 1890s through the 1910s.

The last piece in the book’s main section is Duffy (2014), a lovely rag in a distinctively melancholy cast. Though separated from the first by more than four decades, its style is not radically different; it does not go in directions frequently found in rags of, say, William Bolcom. Duffy still points to historic ragtime as its model, despite harmonic, melodic, and rhythmic features that would not have occurred during the period.

But its compositional execution shows considerable growth: it’s smoother, has more interesting inner lines, departures from the traditional ragtime bass. It exhibits the style that I’ve come to identify with Jenks, although I would not consider it the exemplar of these traits. Jenks’s ragtime style, as I see it, follows a traditional tonal approach with attractive melodies, but accompanied at times with unexpected, mildly dissonant harmonies; the bass may add to the dissonance with ninths instead of the usual octaves; within the harmonic progressions, intricate inner lines, frequently chromatic, might emerge into significance; occasionally unexpected and temporary key changes catch our attention.

Among the 34 rags, a couple are grouped into sets of three rags each. One of the sets is titled Triskelion (1993), referring to a Celtic symbol or design composed of three connected spirals or legs. It’s an attractive title pointing to three components—in this case three rags—though I could not perceive a musical reason for these three rags to be grouped together.

The first, The Old Pink Piano, is a perfect example of what I described as the Jenks style. It contrasts markedly with the second rag: Gymnoraggy. This title obviously refers to the three Gymnopedie published by Erik Satie between 1888–1895. The Satie pieces are deceptively simple, played slowly with all notes occurring on the beat, but with enough peculiarities in the harmonies and melodic phrasing to keep one slightly off-balance and interested.

Jenks adopts the manner of Gymnopedie beautifully, including its off-balance traits, but since he is creating a rag (albeit in ¾ time), he necessarily inserts the defining syncopations. Satie became interested in ragtime in the 1910s; Gymnoraggy shows what he might have written had this interest started two decades earlier.

The third piece, Too Many Beans, has little of the stereotypical ragtime syncopation and might be closer in spirit to the novelty piano style of the 1920s–30s. It’s brisk, full of surprises with modal shifts, unexpected harmonies, temporary modulations, and rhythmic disruptions. It’s a thoroughly delightful piece.

Jenks plays games with Stolen Moments (2003), a rag composed of themes quoted or adapted from other composers. Its thematic and structural breakdown corresponds to the typical sections of a conventional rag.

The opening ABA portions are composed primarily of material based on Chopin’s Etude op. 10, no. 8 and the rondo movement of Mozart’s D Minor Piano Concerto, K. 466. The Chopin section uses not the right-hand’s virtuosic passage-work but the left-hand part, to which Jenks adds occasional syncopations.

The Mozart B section has a couple of brief interruptions, first with a quote of the opening theme of Beethoven’s Piano Sonata op. 31, no. 2 (James Scott apparently based the opening of his 1918 Rag Sentimental on the same Beethoven theme) and an adaptation of Grieg’s “In the Hall of the Mountain King.” And so it goes on its larcenous way. But Jenks does not restrict himself to the classics as he ends with an interpretation of J. Bodewalt Lampe’s popular cakewalk Creole Belles (1900). I would imagine that Glenn had a big grin as he penned the final notes of this piece. And that’s how I like to remember him: Glenn with his great, big grin.

There are many rags here that I could discuss, but this sampling should suffice. Not a single piece is without interest, not one fails to stimulate attentive curiosity. On a personal level, the surveying process had me vacillating between extreme interest and melancholia. I found myself repeatedly wishing Glenn was here to answer questions, to respond to my comments. This compilation of his music is a fitting monument that places Glenn Jenks among the foremost contemporary composers of piano ragtime.