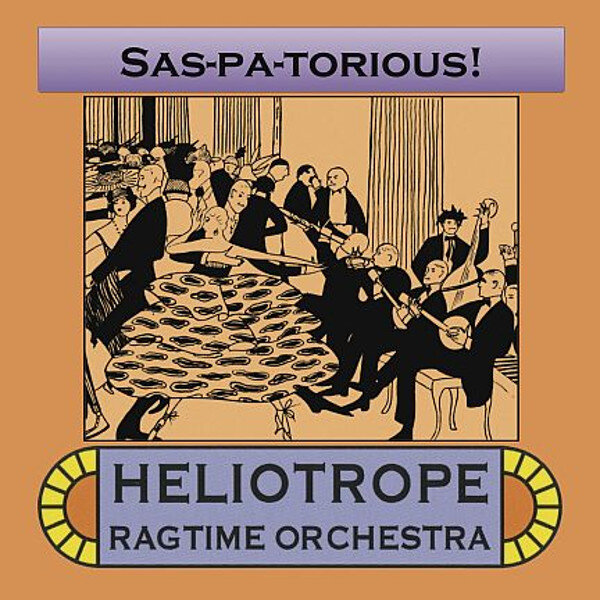 In this, their third CD, the Heliotrope Ragtime Orchestra pushes their boundaries into the 1920s to pick up some great tunes from the third decade of the twentieth century.  This is not to say that they have abandoned their previously stated parameters of 1890-1920 (not true!), but about two-thirds of this playlist was mined from the rich veins of this additional decade.  This has necessitated accommodating to a slightly more brash sound (think saxophones), a departure from the more genteel sound of the earlier period (think clarinets, flutes and second violins).

Co-leader Bruce Vermazen states that HRO was founded to play dance music and by the end of the first cut, one feels the urge to don smooth-soled shoes and seek out a polished floor.  There are tempos to fit any rug you want to cut: slow blues (Tishomingo Blues, Krooked Blues, Dixieland Blues), waltzes (Echoes from the Snowball Club, My Buddy, In My Merry Oldsmobile), a cakewalk (Peaceful Henry), a two-step (Climax Rag), a tango (Admiration), and many others to enjoy.

Ragtime lovers will appreciate the later styles of novelty (Knice and Knifty, Feedin’ the Kitty) and stride (Carolina Shout), and there’s even the premiere recording of a long-lost composition by Joseph Lamb (Crimson Rambler) [as Pinsker’s piano solo] to drool over.

Their playing is cohesive and the recorded sound is well balanced; in fact, you’d swear you were gliding around in front of the bandstand.  They stick tightly to period arrangements, with only tiny bits of tweaking. Instrument solos are few and far between; the HRO seems to favor the ensemble sound with snippets of individual instruments to add variety.   The three vocals are pleasant but unremarkable, adding some nice variety, however.

The package artwork is attractive and the liner notes are excellent.

I give top marks to Climax Rag, but there are no weak cuts.  However, for those accustomed to hearing Jelly Roll Morton played with the free-for-all fervor of a Dixieland band, the more restrained orchestral approach to Chicago Breakdown, The Pearls and King Porter Stomp may be an acquired taste (not a criticism but merely an observation).  The Heliotrope Ragtime Orchestra has a winner here, which should appeal to dancers and listeners alike.