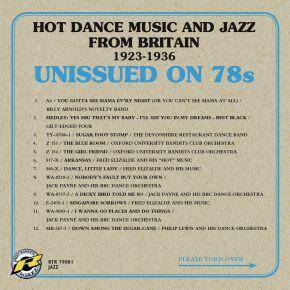 While jazz was born in the United States, it has been an international music ever since the recordings of the ODJB were heard overseas. While one could argue that there were few innovative jazz artists from Europe prior to the rise of Django Reinhardt and Stephane Grappelli in the early 1930s, American jazz was having a strong impact on the European music scene, starting a decade earlier. For proof, one should check out Hot Dance Music And Jazz From Britain 1923-1936, part of the Retrieval label’s “Unissued On 78s” series.

The 24 selections on this CD were, with one exception, previously unissued test pressings. Combining together alternate takes and unknown material, the set makes a strong case for the credibility of British jazz in the 1920s and early ‘30s. Starting with an unknown group from 1923 (probably Billy Arnold’s Novelty Band) that could easily pass for a forward-looking American band from the time, and progressing to the beginning of the swing era, there is a great deal of enjoyable and surprisingly well recorded music on this collection.

While most British dance bands of the 1920s and early 1930s emphasized polite, melodic, and conservative music, the performances on this CD, with the exception of a few throwaway vocal choruses, is hot and swinging. 1920s jazz collectors will certainly want this disc, along with the others in the valuable series.