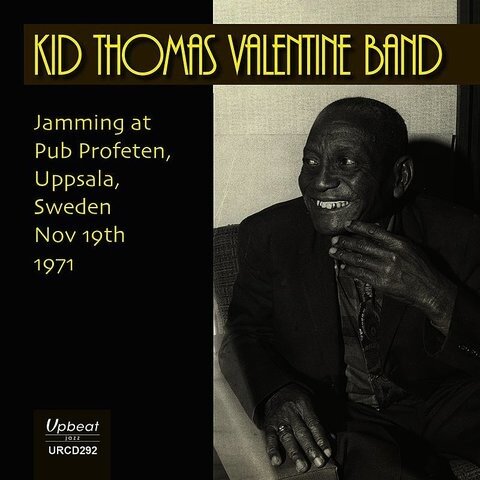 For a good many years, now, I have been a fan of Kid Thomas and his various bands; so when I first heard about this recording, I was eager to hear it as it had never been previously issued.

As we learn from the booklet, the band had performed in a show in Sweden along with the Duke Ellington band, and after that they headed to the Studio Pub Profeten in Uppsala for a jam session. There, according to the booklet notes, “two guys were equipped with audio tape recorders,” and therein, perhaps, lies the first problem. The sound quality is not very good. Perhaps the mike placement was at fault, or even the recorders themselves were not functioning well. There is little separation or balance, so the ensembles come through somewhat fuzzy. The solos fare better, fortunately, and we can hear the distinctive Thomas style of phrasing, of flares and flourishes, of staccato bursts of notes.

The vocals, however, are not as lucky, being almost totally unintelligible, and they are both quite frequent and, in most cases, long. The vocal in the second track, “Tin Roof Blues,” which is eleven-and-a-half minutes long, takes up most of the track; in similar fashion the sixth track, “Go Down Sunshine,” much of it vocal, is twelve minutes long; and the final track, “Blues,” is eight minutes long. Undoubtedly for the audience there was no problem, judging from the rapturous applause after each number on the disc.

As I said above, the solos provide the interest here. For me the best track is the fifth, “Shake It and Break It (Weary Blues),” which Thomas kicks off at a brisk tempo, providing a nice contrast to that of the previous four tunes. Thomas is in good form here, displaying all of the trademark features. None of the groups playing these tracks contains drums, but that absence is made up by Thomas’ percussive style. Nelson here is given to fast tonguing, eschewing for the most part legato tones. On clarinet, Burbank favors the upper register for most of the CD, but here he also shows command of the lower register. Paul, as he always seems to do, nimbly fingers the tenor sax with nary a squeak or squawk. Hitting all the right notes and keeping good time is Rosenqvist on banjo. The other two musicians on this track, Tidholm on piano and Benjamin on electric bass, are barely audible, however, especially Benjamin.

Had there been more of the spirit of the fifth track and less of the long, rather tedious vocals, coupled with better recording, this would have been a much better CD. As it is, it is not quite what I had anticipated. I should imagine it will appeal most to Thomas completists. It is available from the Upbeat Recordings’ web site www.upbeatmailorder.co.uk and from other web sites such as Amazon.

Kid Thomas Valentine – Trumpet (all tracks); others (all mentioned in booklet).