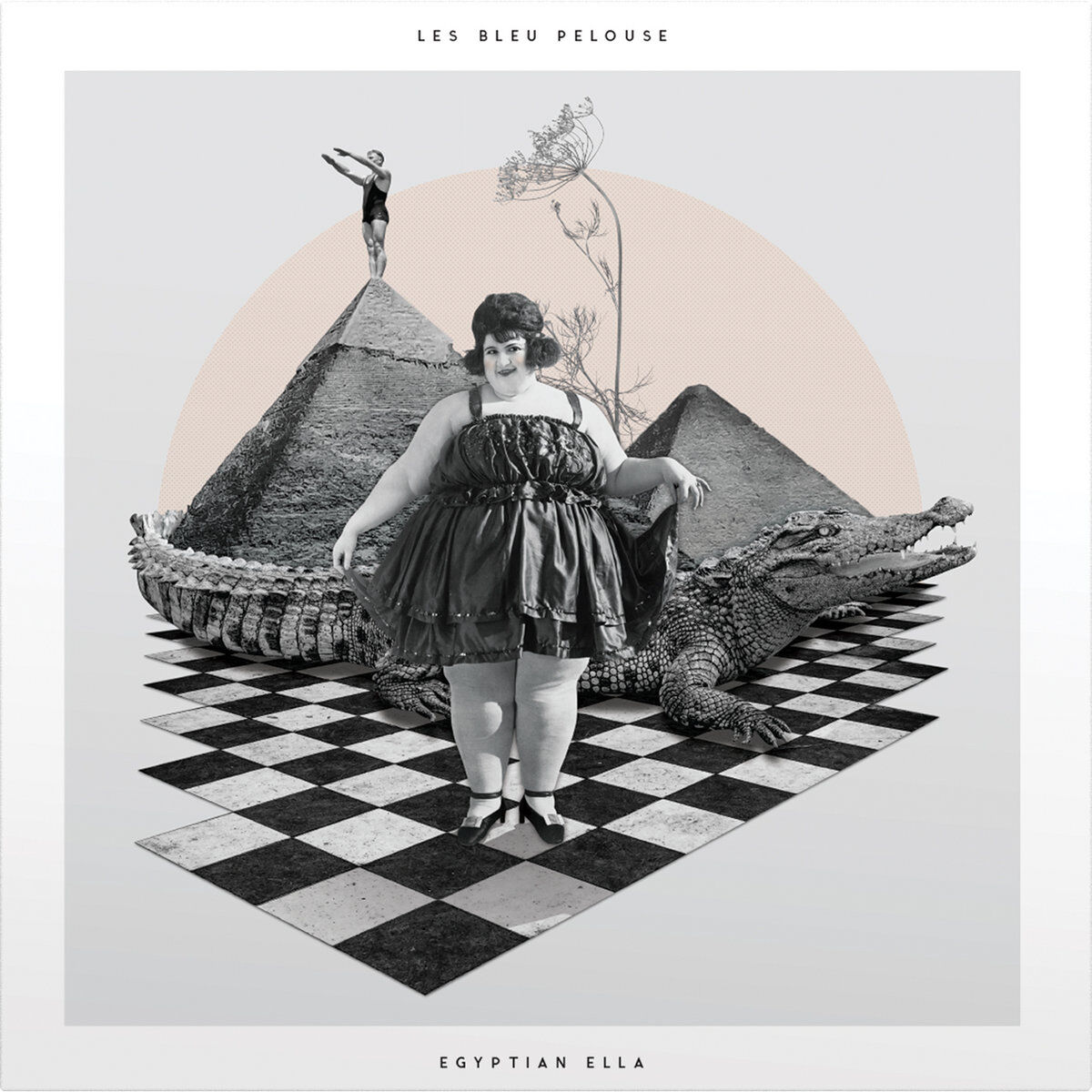 Just occasionally, a piece of music makes you go, “Wait, what?” This was my reaction on first spinning Egyptian Ella by Les Bleu Pelouse. The quatuor québécois (plus special guests) packs a resonator guitar, double bass, washboard, saxophone, clarinet, and harmonica—so far, so standard—plus what sounded to me like a haunted theremin. Checking out the line-up, it listed Mylène St-Amour, player of the scie musicale. A musical scythe? I know my French is somewhat rusty, so I double checked this—a musical saw made slightly more sense. I had heard of musical saws, of course, but never had I come across one in a jazz or blues context—and this album features plenty of both.

The third full-length release from Les Bleu Pelouse (it means the blue lawn, if you’re wondering), Egyptian Ella is an eleven-track celebration of spooky blues and downbeat jazz. Think the Mississippi Delta on Hallowe’en, or New Orleans through a haze of liquor and hard drugs—that’s how this Limey imagines it anyway. It sports tunes made famous by Louis Armstrong (“Lawd, You Made the Night too Long”), Victoria Spivey (“Blood Thirsty Blues”), Cab Calloway (“Kickin’ the Gong Around”), and more, skewing heavily towards the minor key and a leisurely tempo, delivered with a growl and in digital high definition.

The effect is old-time jazz and blues via Tom Waits, Nick Cave, or C. W. Stoneking—moody, but still swinging. “The music of Bleu Pelouse presents an ambivalence between its resolutely festive character and its dreadful atmosphere,” their website declares, which sounds about right to me. The pace is generally plodding, but a solidly thumping bass (Thierry Sterckeman) gives it good potential for a leisurely dance while faster tracks like “Who Walks In When I Walk Out” or “Egyptian Ella” will have Balboa and shag dancers trotting through some very capable brass and reed solos (Johannes Groene).

I always like to hear a harmonica and Mathieu Riopel’s playing, as heard on “You Shouldn’t Do That,” is solid though not virtuosic. And of course, I can’t review anything without giving the piano a few sentences: Hearing guest player Philippe Grant’s instrument on three tracks is a superlative sonic experience—his syncopated solos are brilliantly barrelhouse, his instrument sounding delightfully bright and twanging. It might be a well-aged acoustic, or it may be a top-tier digital stage—whatever it is, it sounds fantastic.

Conversely, the sound of a musical saw is… an acquired taste. Normally I listen through my precious Bose QC35IIs, volume quite high so I don’t miss a single nuance of the music. But the scie musicale—which plays a prominent role in “À moi d’payer”, for instance—makes this almost impossible, so shrill is its tone. It’s obviously a difficult instrument to play precisely, as the sawist presumably does so by ear. As a result, St-Amour’s note occasionally starts a few cents away from her bandmates before (usually) sliding into tune.

This slight discordance, while upping the gothic spookiness of the whole affair, does nothing to mellow the instrument’s piercing tone. As such, you’ll either like it or you won’t. I like it, but only after switching from headphones to a speaker—which is how I recommend listening to this album. It dampens the double bass somewhat, but this music suits a somewhat trebly, wax-cylinder sound anyway.

The band’s two vocalists, Riopel and St-Amour, are good—neither will ever win a Sarah Vaughan prize but, as with the spooky saw, their ever so slightly shaky pitch is well suited to the whisky-chugging jug band sound they seem to be going for. It’s refreshingly different from what I usually review, and perhaps towards the fringes of what many Times readers like, but it’s definitely worth a listen. Find it on Bandcamp and sling them ten bucks, if you like what you hear.