I have written a lot about Treemonisha over the years and since 2022 marks the 50th anniversary of the first two fully staged productions of Scott Joplin’s opera, I am still inspired to comment. The first premiere was performed with Dr. T.J. Anderson’s orchestration in Atlanta in January 1972, and the second, with William Bolcom’s score, was presented at Wolf Trap Farm in August of that year.

I enjoyed being at both premieres and I was at the third version premiere by the Houston Grand Opera in 1975 orchestrated by Gunther Schuller. That production went on to run 54 performances on Broadway. I have not had the pleasure of being at a Paragon Orchestra performance using director Rick Benjamin’s fine orchestration. However, I have nearly worn out the 2011 CD release.

Fifty years has afforded time for debate about the relevance and quality of the work. There has also emerged a basic disagreement over the meaning of Treemonisha just as post-Civil War African American leaders disagreed about how former slaves should be brought to full equality.

W.E.B DuBois advocated instant equality and access to higher education as White citizens were afforded. His was an academic approach from a Northerner’s perspective. Booker T. Washington’s believed in a more gradual process to equality through training focused on educational basics and vocational instruction as practiced at his Tuskegee Institute. His perspective was Southern as a former slave. That debate was raging as Joplin was writing his opera.

Sue Attalla, in her marvelous online essay on the opera, emphasized the impact of Booker T. Washington’s influence on Joplin. She also addresses the conjuring hoodoo culture of the time and describes the way the composer uses Treemonisha’s effort to end those slave-era practices.

Personally, I have always believed Joplin took more of a middle ground with his opera that shouldn’t have offended either side. Joplin did seem to lean toward Washington’s philosophy, perhaps instilled in him from attending the George R. Smith College in Sedalia Missouri in the 1890s. The Sedalia school was strongly influenced by the Tuskegee model.* His lost opera, A Guest of Honor, was likely in recognition of Washington’s invitation to dine at the White House by Theodore Roosevelt in 1901.

There has also developed a disagreement over how the opera should sound since no Joplin orchestration has survived. Joplin left only a piano score of his work. Multiple orchestrations for various instrumentations have been employed since the 1972 Atlanta premiere. As an indication of the opera’s classical value, contemporary interpretations of this classic folk opera have emerged. The latter is of current relevance.

This latest writing is motivated by notices of recent or upcoming productions of Treemonisha. Peter Lundberg’s reminder in social media that a production in Caen, France, on the Normandy coast will be staged October 13-15 aroused my interest. I am also aware that the Opera Theater of St. Louis (Missouri) will be restaging the work with what is billed as an imaginative new production, May 29 through June 24, 2023.

It will be somewhat rewritten from a woman’s viewpoint, with a prologue and epilogue allowing Joplin and his wife Freddie Alexander Joplin to address the audience.

There have been several efforts in recent years to reimagine and reorchestrate Treemonisha, As I researched the Caen production, I find they are bringing in the Isango Ensemble (of Cape Town, South Africa) for the performance. This group is under the direction of Mark Dornford-May, Conductor, and Choreographer Lungelo Ngamlana. Dornford-May’s all-African company has an attractive video online previewing the music and a bit about the performance and performers. According to the video they are attempting to create a more authentic production using traditional instruments and rhythms.

I was quite impressed by the rhythms employed and the choreography.

Often, as I attempt to write about music, I rue the fact that I am not myself, musical. However, when it comes to interpretations of Joplin’s opera, I celebrate that I am an expert on what I enjoy, understand, and appreciate. That creatively discerning minds invest time in studying Treemonisha, and care enough about it to add their interpretation validates to me that Scott Joplin’s genius is still vibrant and very much at work inspiring new generations.

The new St. Louis production (the Opera Theater produced it previously in 2000, using the Schuller orchestration) is directed by Daniel Sneed, the Librettist is Karen Chilton, and the conductor is George Manahan. Mr. Sneed’s orchestration is also new and some of this work was premiered at the 2019 Phoenicia International Festival. 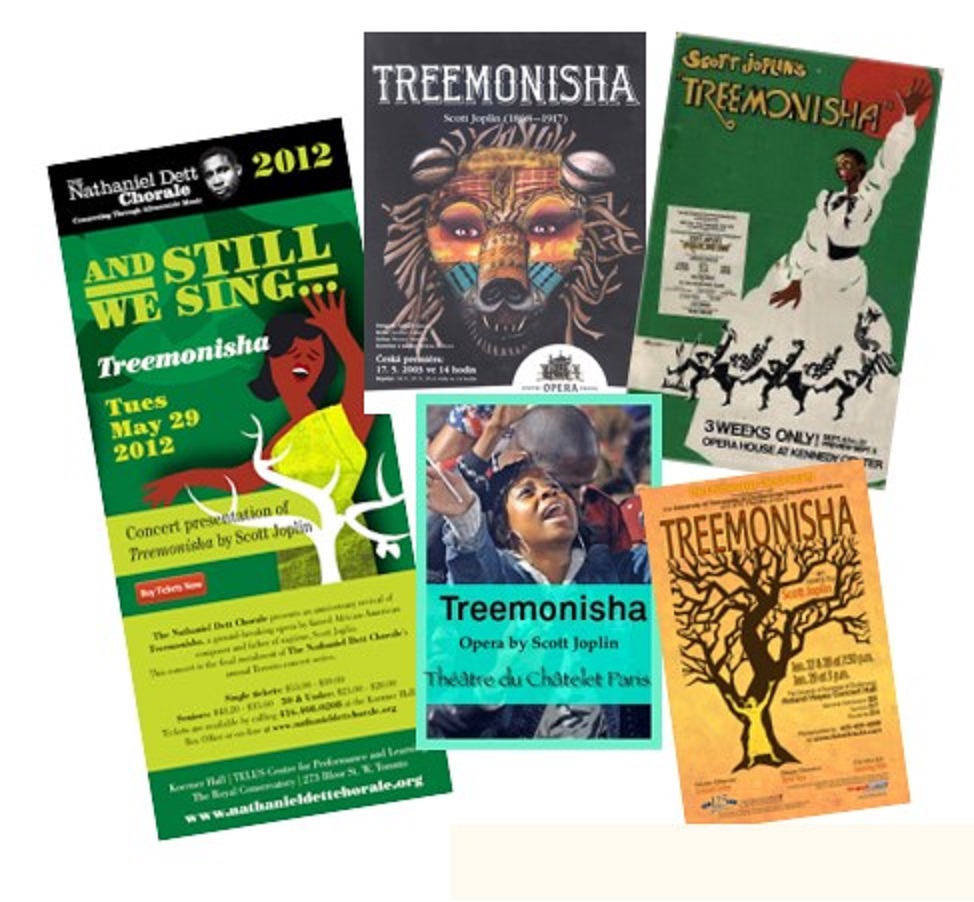 Joplin’s opera has been performed on stage or in concert around the world: Paris, Italy, Finland, Germany, and Canada. In 1997 Aaron Robinson performed a concert version in Rockport, Maine with a new libretto by Judith Kurtz Bogdanove, and, in 2008, Sue Keller produced and arranged an abridged orchestral-choral rendition for the Scott Joplin International Ragtime Festival in Sedalia, Missouri.

I find it refreshing and encouraging that Joplin devotees civilly disagree about the productions of Joplin’s intellectual property. Civil disagreement is a hallmark of America’s great tolerant diversity. The uncivility that tarnishes our national character is not to be interpreted as passion. It is quite frankly immature intolerance. I celebrate the interpretations of Joplin’s work. They honor his legacy and elevate his genius.

Meanwhile in my reverie recalling all the great moments I have experienced at many Treemonisha performances, I will sit virtually on the memorial bench at Joplin’s grave and pensively “rest awhile.” (Thank you, Ed.)