I surprised myself when I placed the phone back on its port and just sat to let the inspiring emotion of the previous conversation mellow. I had just been visiting with T.J. Anderson, about the first concert performance of Scott Joplin’s Treemonisha in Atlanta, in 1972. The venue was Symphony Hall, with the Atlanta Symphony directed by Robert Shaw. Morehouse University had produced the modern premiere under the leadership of Dr. Wendell Whalen. The call brought back a flood of memories and a great deal for me to ponder. Dr. Anderson had orchestrated Joplin’s score that William Bolcom edited with “slight assistance,” from Dr. Anderson.

It had not been an easy undertaking for the men due to a disagreement with a belated copyright owner, but Bolcom and Anderson accomplished their roles with great professional dignity, awesome talent, and friendship. Both composers have produced a prodigiously important body of work in their long careers.

Now fifty years later I am astonished that these two eminent American composers had been involved in staging Joplin’s then 60-year-old opera and that I have had recent communication with these two legends. In this era of divisiveness and racial conflict, these men had been part of bringing the work of the son of a slave to public attention. It had been my privilege to attend that premiere and meet these great American composers. (see TST April 2019, p. 18 for my account of the early performances.)

I first met Dr. T.J. Anderson, Jr. and William Bolcom on that occasion, January 28, 1972, at 2:45 PM. I can be sure of the date and time because they were on an African American Music Workshop panel the afternoon prior to the premiere. We had driven all night from Sedalia to be there and it was well worth the effort. By 1972, Anderson and Bolcom were well known composers and Dr. Anderson was a recognized authority on African American music. He had been the Composer in Residence for the Atlanta Symphony for the previous three years and had been selected by Dr. Whalen to orchestrate Treemonisha, from Joplin’s printed piano score.

The 50th anniversary of that event comes this month, and once again a spotlight will shine on Scott Joplin and his seminal role in the advent of America’s popular/classical music. He was also one of the first to compose a truly American opera in the classical tradition.

I had inquired how Dr. Anderson had located Joplin’s score and he replied that William Bolcom gave it to him. Bill’s story is now a legendary part of Joplin lore. He and Rudy Blesh were teaching at Queen’s College in New York City. Blesh, along with researcher Harriett Janis had written They All Played Ragtime, published in 1950. When he inquired if Rudy knew of a copy of the Treemonisha piano score, Rudy responded by showing him a copy of Joplin’s own score Blesh had acquired from Lottie Joplin while he and Harriett Janis were working on their book.

The tragic story of Joplin trying to get Treemonisha published and produced after its composition in 1911 is well documented. It became the composer’s obsession but only a single read-through stage performance took place in Harlem in 1915 and it was produced at Joplin’s own expense. The original orchestrations Joplin had created with his friend Sam Patterson have been lost, along with his entire first opera A Guest of Honor.

Joplin spent the last years of his life trying to get Treemonisha properly staged but he was unsuccessful. Scott Joplin died a long-suffering death in the Manhattan State Hospital on April 1, 1917, and was buried in a pauper’s grave in St. Michael’s Cemetery on Long Island.

It would be 60 years before Treemonisha would be “premiered” as a fully staged opera. T. J. Anderson has explained how he referred to the few ragtime orchestrations there are by Joplin to determine period instrumentation. He was already familiar with African American orchestration styles of the era, and he attempted to create an authentic sound for the Atlanta premiere. He describes the opera as reflecting the composer’s life experience and he went on to say, “I believe an opera written in this country must have an indigenous perspective and an emotional response to the American experience….and (be) rooted in the culture.”

For those acquainted with the post-Civil War debate between W.E.B. Dubois and Booker T. Washington, over treatment of former slaves, it is apparent that Joplin took Washington’s side promoting education as author Sue Attalla has capably described.

William Bolcom at age 83 and his wife, Joan Morris, are retired from performing though Bill is still actively composing. There is a concert performance in Heidelberg of his work in April and a “Concerto for Chamber Orchestra” premiering in the US in November 2022. Bill had a long career teaching composition at the University of Michigan. His compositional oeuvre is extensive, including four major operas. Among his many honors, he has received a Pulitzer Prize, the National Medal for the Arts. and four Grammys.

Now aged 93, T.J. Anderson has a long and distinguished career in higher education and in music composition. He has been a prolific composer including three operas of his own and he is considered an eminent original with many awards and honors to validate his achievements. His Treemonisha orchestration was most recently used for the Atlas Performing Arts Center Production in Washington DC in 2018. Dr. Anderson’s favorite memory (of many) from the Atlanta premiere is of a dear Chicago friend holding the Anderson’s waving daughter on his shoulders during the encore as the cast was “marching over…”

A special concert program at Tufts University titled “Memory Leaves—Present and Past,” honored Lois Anderson and Dr. T.J. Anderson, Jr., who is the Austin Fletcher Professor of Music, Emeritus. The concert was held December 3, 2021, and featured works by Dr. Anderson as well as compositions by Tufts’ faculty and students.

I checked with Morehouse University to see if there is to be a 50th anniversary recognition of the event. I discovered they hope, after the COVID-19 threat is passed, that a proper acknowledgment of the Treemonisha premiere can be made.

During preparation for this column, it was my pleasure to discover that the Division Chairman of the Creative and Performing Arts program at Morehouse today is Dr. Uzee Brown, Jr., who sang the role of Parson Alltalk in the Atlanta premiere. He enthusiastically spoke of working with Katherine Dunham, Dr. Anderson, Dr. Whalen and the cast. Dr. Brown has had a diverse career as a singer/performer, composer/arranger, educator and choir director including 12 years as choir director of the Ebenezer Baptist Church, Atlanta.

He spoke with great enthusiasm about his experience and remembered that Katherine Dunham had to be seated during most of the rehearsals due to pain issues (as she is pictured in black in the photographs.) He also described how several of the cast members copied scores for the orchestra on the floor during the rehearsals.

Among other principals still active is Dr. Simon Estes who sang the role of Monisha’s father Ned. After a career with the Metropolitan Opera, he had an extensive performance career and in retirement, he returned to his Iowa home and is a Visiting Professor of Music at Des Moines Area Community College, Ankeny Campus, near his home. He is also still active in humanitarian work.

Laura English (Robinson) had the role of Lucy (Treemonisha’s friend) and is currently on the faculty of Spelman College in Atlanta. Her performing career was also extensive and she has had a long career in higher education.

Rev. Joseph A. Bias sang the role of Simon the Conjurer and has had a long career in his music ministry.

Treemonisha had brief incarnations in concert performances before Atlanta, and many staged performances across the country since. I have seen all of the early orchestrated productions and many others in the last 50 years. The 1975 Houston experience was grand for its elaborate staging and marvelous orchestra and voices. Over time I have been blessed to hear from set and costume designer France Colavecchia. The Wolf Trap Farm production was delightful for the quality of the music. The outdoor setting added a bit of realism to the evening. I have appreciated the thoroughly researched Rick Benjamin recording and extensive notes.

Now however, 50 years later and I’m that much older, like gilded baby shoes on family bookends, lovingly preserving memories of a child’s first years, the Atlanta premiere is gilded in my mind and the memory of that amazing moment is a bookend, opposite this privilege of getting to write about it now. (No wonder I have memory problems with all that metal and wood taking up space.)

One of the photographs I took of the Atlanta premiere has now been restored and my shaking image stabilized. 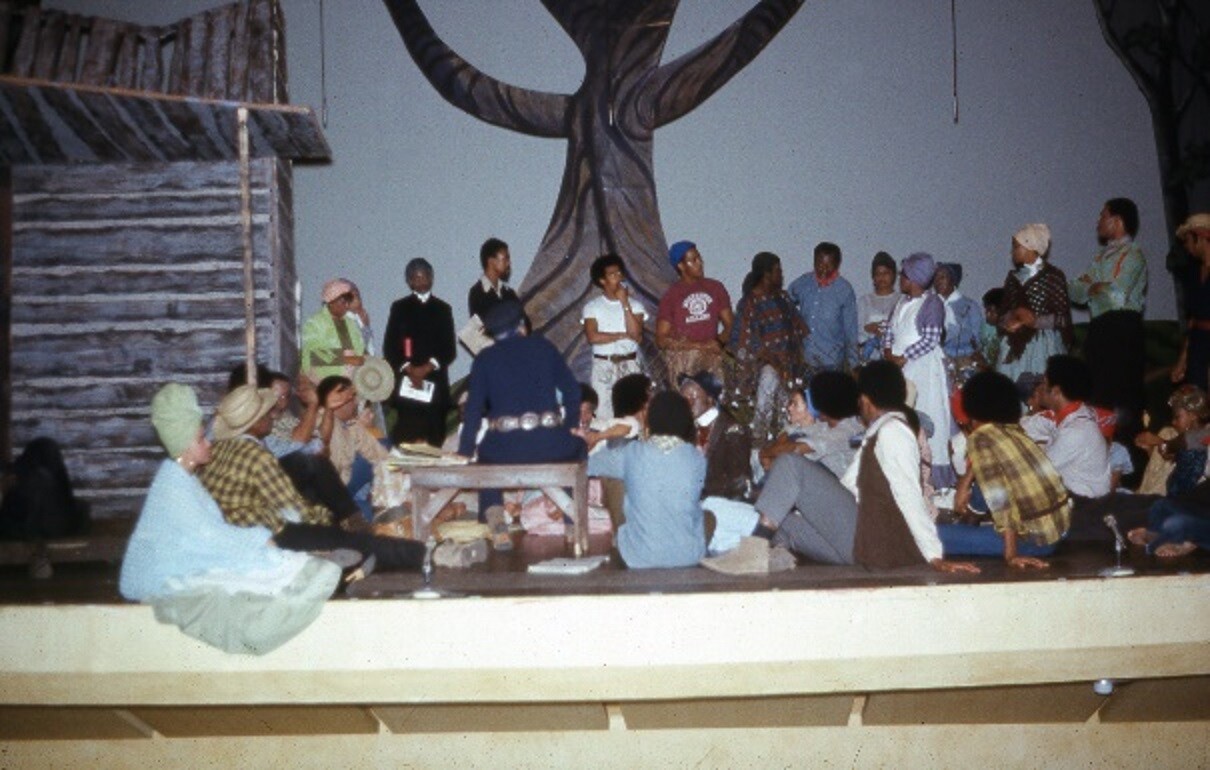 For an in-depth examination of the Treemonisha premiere and orchestration see:

Attalla, Sue; “This and That A cultural Blog; Begins August 2017”

Benjamin, Rick; Book notes for Treemonisha by the Paragon Ragtime Orchestra and Singers,