Poetry in Motion—Then Lotion: From the Intrepid Battle of the Big Bands

“Dancing is poetry with arms and legs.”
(Charles Baudelaire)

A few weeks ago I was in a pretty tough spot. The most dreaded night of my year was quickly approaching and I grew more overwrought as the date closed in. When it finally arrived I faced it bravely, somehow surviving, but it’s only now that I am able to talk about it.

I’m just a sideman trumpet player, but I’m really, really trying to like dancing. I really, really am. I admire people who feel the music and let their bodies move accordingly, but I grew up playing in dance bands, making the music while watching in wonder as others let the music move them. The very few times I’d attempted to dance were uncomfortable, embarrassing failures and I vowed never to try it again.

Then one night, I became ensnared in the tender trap. The woman I flipped for was a ballroom dance competitor, now retired, but one for whom swing dancing would always be a vital component of life. Following our swift betrothal she made it clear that I was to be her one and only dance partner. I was dragged, kicking and screaming, to dance classes where after a mere two decades, I had developed sufficiently to squire my bride across the floor for an hour or so, ping-ponging off many of her former dance partners, who’d lay the side-eye on me when they thought I wasn’t watching. However, this summer brought an entirely new challenge in the form of the annual “Intrepid: Battle of the Big Bands.”

This unique event has become the night of nights, the big gala affair that kicks off the summer swing dance season here in New York. My wife never fails to show the patience of a saint as I hang on to her, year after year, stumbling over my own feet like a Dancing with the Stars first-round laugher. Generating the stamina to endure the rigors of two 45 minute dance sets has always presented a gargantuan challenge to me, despite my pre-dance meal consisting of a bowl of Advil, with cream and strawberries.

The real terror, however, kicked in after perusing this year’s “Intrepid” flier. I stood, slack-jawed as I read the details of the recently expanded program, featuring not one, not two, but three 16 piece big bands, providing continuous dance music for five hours, a proposition that immediately brought to mind the movie They Shoot Horses, Don’t They, the 1969 depression-era film where couples, competing for a cash prize, dance continuously until they drop from exhaustion.

To make matters worse, there were reports of transient thunderstorms and random lightning strikes, forcing the relocation of the event from outside on the Flight Deck to the Hangar Deck one floor below, a space that would accurately be described as an all-steel 30,000 square foot reverb chamber. My hearing, already diminished by years of high-volume gigs, would be under direct attack the entire night. I was doomed from the start!

This gigantic vessel, the mighty Essex-class Intrepid, docked at 46th Street and 12th Avenue, had certainly endured her share of punishment since her commissioning in 1943. She had been torpedoed once and hit by four separate Japanese kamikaze aircraft during World War II, yet there she stood, facing an even greater challenge in the form of hundreds of wildly undulating bodies punishing the old girl’s deck for five hours. I took little comfort in knowing that if at any point the ship should begin weakening, deteriorating to the point of scuppers awash, we would have had a tough swim back, fighting the currents of the Hudson River in order to regain our footing on the Manhattan Island. As I saw it, this was to be as rigorous a marine adventure for me as anything Ferdinand Magellan might have faced during his 41 years of life on the high seas.

Once processed and herded into the space, the music started. Bodies of every size and shape crowded the floor, many dressed in period costume, the women garbed as vintage vixens in beads and fringe, flappers and Gatsby girls, from plump to razor thin, while the men collectively spanned the gamut from lanky World War I Doughboys to large and lardy Pillsbury Doughboys.

To give musical credit where it is absolutely due, the evening’s fabulous lineup included The George Gee Swing Orchestra, The Artie Shaw Orchestra, and The Eyal Vilner Big Band. In addition, several smaller bands and dance groups rocked the outer reaches of the vessel, including Queen Esther and the Hot Five, The Madhattan Quartet, the dance troupes The Intrepid Swing Dance Brigade, The Bathtub Ginnys, and The 1940s Styled Pinup Girls.

One of the nicer aspects of the evening was that, contained in that room were 12 trumpet players, 15 sax players, 9 trombonists, 3 bass players, 3 drummers, 3 piano players, and 1 guitar player, most of whom had been friends of mine for decades. If this night was to be my last, I would at least go out surrounded by friends and family, sparing them the inconvenience of arranging for catering, dealing with bad parking, enduring endless maudlin speeches, and shedding gallons of crocodile tears at my memorial on some later date.

I’ll spare you the gritty blow-by-blow, but suffice it to say, all things considered, with the aid of earplugs, unlimited wine samples, and the loveliest gal any guy might dream of escorting, I was able to remain conscious and mobile, turning in a very respectable performance! We walked all the way home afterwards, beneath the glow of the full moon, the classic melodies still echoing in our ears.

As I lay in bed now, the morning after, paralyzed from the waist down, I’ve dismissed my minor discomfort as merely the result of one or two trifling hip socket labral tears, a few self-correcting dislocations, and a partially severed spinal cord, nothing that couldn’t be made right as rain after a bit of surgery and a month or two of complete immobilization. As I try recollecting where I’d left my Medicare card, Deborah has leapt from the bed and run to the computer in order to purchase our season’s pass to the Lincoln Center Midsummer Night Swing series, beginning in three weeks and running from June 26th through July 14th. 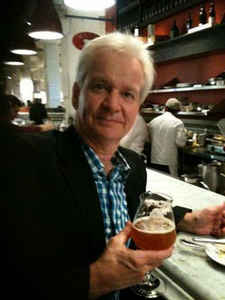 Writer/Jazzman Ross Konikoff has played trumpet for Buddy Rich and Liza Minnelli. Two books of his hilarious essays are available for Kindle through Amazon.com: You've Got to be Carefully Taut and Breaking Even Every Time. He and his wife Deborah Grisorio live in Manhattan.