Roaring in the Pandemic: Drew Nugent in the Modern 20s 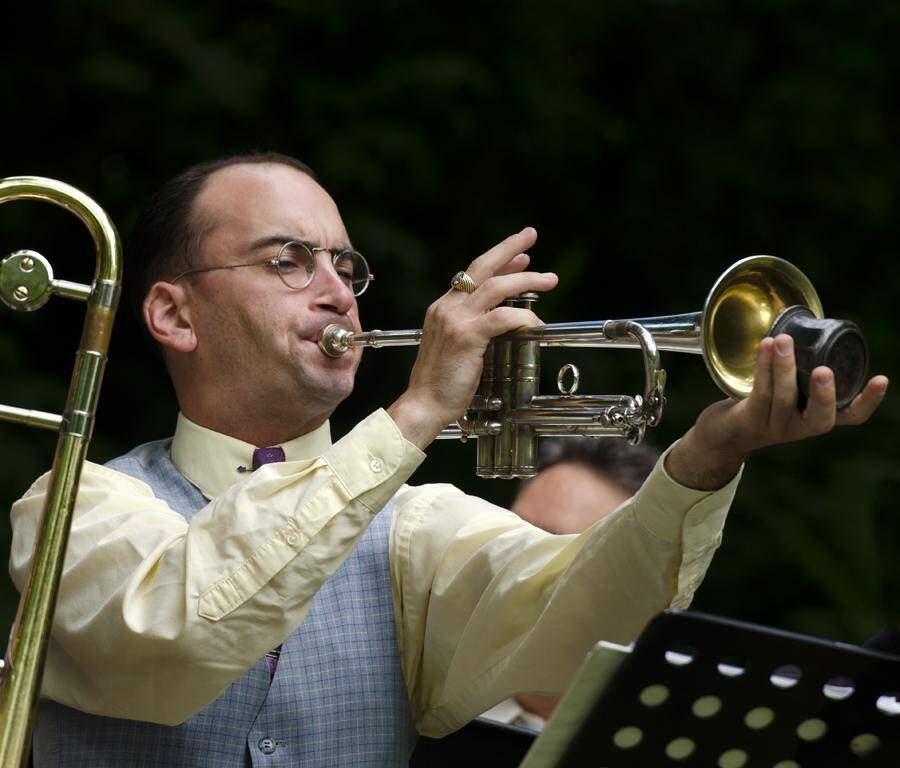 “No time to find excuses for sounding like crap anymore”. Drew says while practicing on his self-tuned 1934 Lester Studio Upright made in his hometown, Philadelphia, following a day of cleaning trumpet collections and readying for a day of filming online content. Mr. Drew Nugent, best known for his rambunctious and authentic approach to Hot Jazz of the 1920s and 30s spanning well over a decade of albums, festivals, and producing authentic events, has taken the pandemic in stride and with more than a few grains of salt.

“This was going to be our year. Roaring 2020s. And I’m not about to let this stop me. Who would’a thought we’d be here?’ He makes his way over to a tripod and a smart phone, fixes his sleeves, and dons a tie ”Whooda thunk?” Drew says facetiously.

Nugent has been a man of duty, authenticity, and history for as long as I have known him and enterprising above all. Nearly 300,000 dead nationwide with no end in sight wasn’t about to prevent him from bringing some happiness and music, however momentary, to a world embroiled in crisis and witnessing a different kind of “roar” from what we might’ve initially anticipated. He was preparing for his almost-daily livestream at this point. “Playing into the void” he calls it: the practice of joking, talking, reassuring, and jazzing it up for a vast audience of nobody out there somewhere.

In many ways he is a kind of WC Fields-meets-Mr. Rogers, talking on his Quarantunes livestream about history, regaling his audiences with stories of his favorite musicians, reassuring them it will be okay even if that comes through gritted teeth and a shaking head, and busking virtually with piano and coronet akimbo.

It’s been a begrudging transition to the virtual realm but a necessary one. So, Drew has busied himself with practicing, playing, and securing as many socially distant gigs as he could. Sometimes it feels like starting over. Like over a decade of work is lost. But, in other ways, it opens opportunities previously restricted by travel or money. When the possibility of having the shortest commute to a gig imaginable is a matter of coming down Drew’s wrought iron spiral staircase from the bedroom and pants are optional, who can complain about having to play in California?

The 2020 calendar has all been cleared out from its grandiose list of flapper-filled, lindy hopping, 1920s gigs as we all went into 2020 thinking the world would be akin to that of F. Scott Fitzgerald. Drew grapples with the reality each day but struggles to not find reasons to carry on, laugh, and perform. In many ways, deft maneuvering has put him well ahead of most other local jazz bands of his ilk and he’s seen an impressive influx of work because of his willingness to adapt. 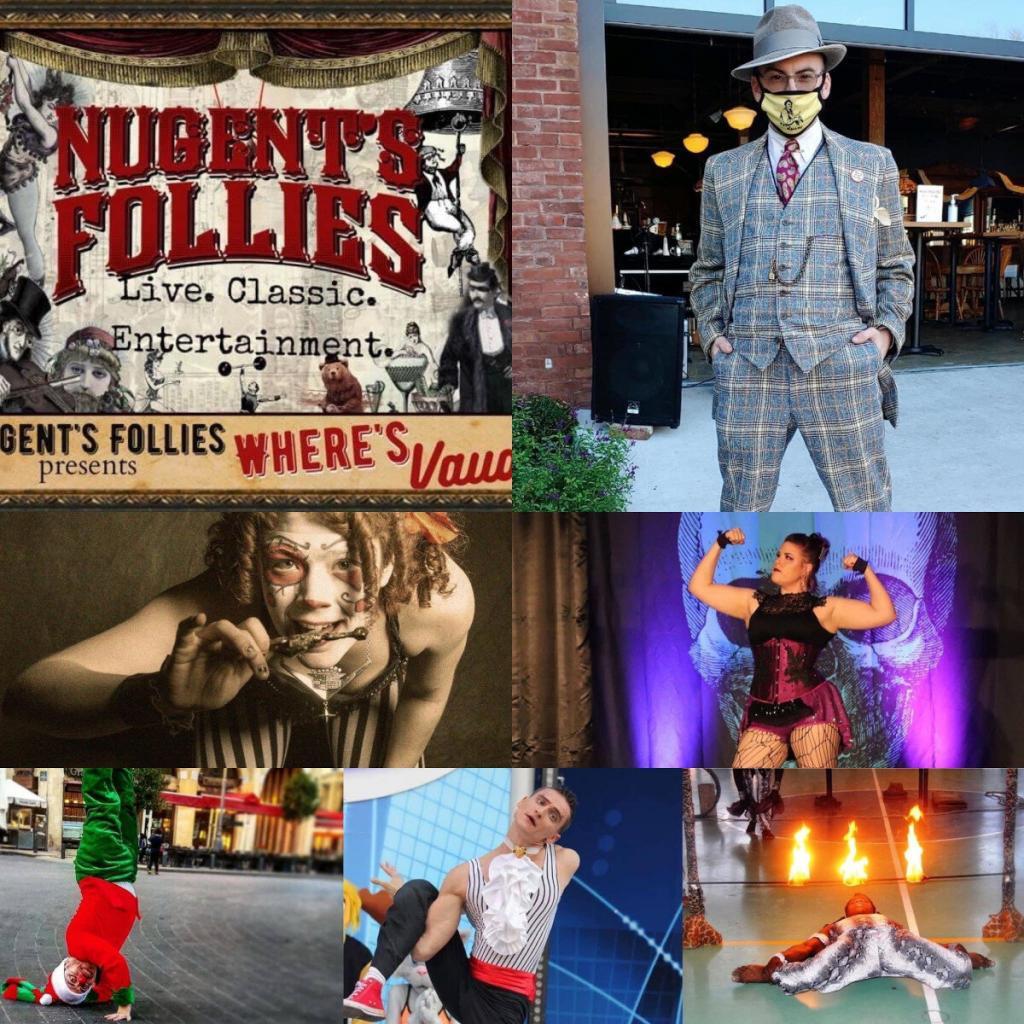 Dan Drago of the 25 o’Clock Podcast called him a “pioneer” in livestream entertainment. Taking full advantage of the virtual delights and endless networking opportunities he and his band have performed simultaneously for seated diners in Philadelphia at the Khyber Pass (which, while generous benefactors, have since closed their doors) and an innovative variety show in Portland where he was in one of the many “rooms” offered in their immersive escapade.

Atop of this Drew took a chance and revived his “Nugent’s Follies” show, molding it into an hour long variety livestream drawing fantastic performers from far and wide. Ethiopian circus troupes, hoopers and fire eaters in the UK, a charming Musikboot captain playing for the people of Amsterdam, a dancing dwarf clown in Algeria, and even a street magician in India have all appeared on the show in some capacity or another through the magic of the interwebs among domestic performers from sea to shining sea.

The Follies has since functioned as a way to keep performers afloat when circuses, cabarets, and stages worldwide close down. This was a decision made by Drew because the lost circus arts, lack of light cast on classic jazz, and overall joy people need in these times can all converge on your TV, phone, or laptop screen. What started as old performing friends quickly became an international schmorgage board, all of whom have invited Drew and the gang to visit post-pandemic.

In many ways its therapy and practice for the performers and Drew: a nonchalant environment to play and perform and make some smiles happen. In other ways it’s a boon to folks abroad who can’t feed their families because their line of work has been rendered obsolete by COVID. All around, however, it’s a learning experience: a chance to meet new cultures, listen to and learn about Hot Jazz, and share our experiences with one another. 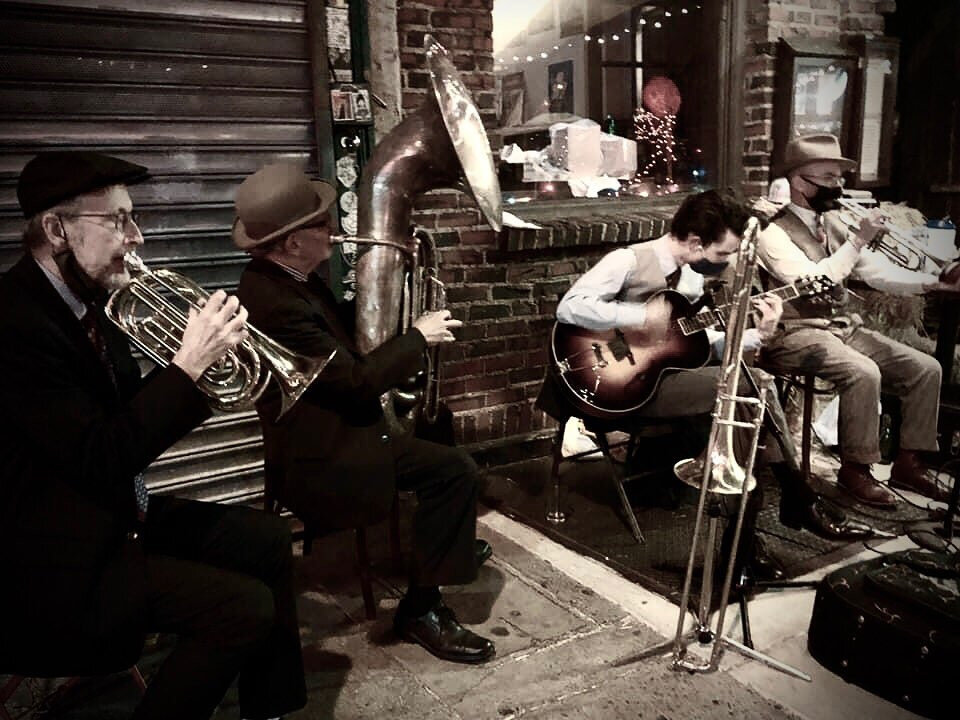 The crown jewel, so to say, of Drew’s quarantine adventures comes in the form of his trio of albums featuring trios of musicians: “Just the Trio Us” (parts 1, 2, and eventually 3), as it were. The first was recorded and filmed in a “real” speakeasy (or as real as it can get…it was a closed bar) and the album hit the virtual shelves about a month ago. The second: in Drew’s ‘Kater Street Vault” (aka apartment) with couches, blankets, and chairs to dampen sound while using home recording devices.

That album is anticipated to drop virtually and on vinyl within the next month. The albums represent a tenacity and necessity for musicians during the pandemic, particularly those with the drive and cunning of the Midnight Society. It’s, if anything, a win insomuch that creativity, historic jazz, and ingenuity can converge in a small apartment in Philly to continue to keep the artistry, swagger, and style of the 1920s and its timeless music alive in the face of death, depravity, and the frightening unknown. And of the third album? To be determined but coming soon!

Adam Iezzi, the so-called Man Behind the Curtain and Concierge of Cabaret runs a boutique entertainment company called Envoute in Pennsylvania. He is a historian, educator, and producer of immersive theatrical and cabaret events that of ten years. A firm believer in historical accuracies entangled in entertainment, he produces events ranging from grandiose Gatsby-esque galas to small thematic and ambitious cabarets in addition to being a hands-on speaker on various historic topics in and around Philadelphia. Catch him on the Grim Podcast!