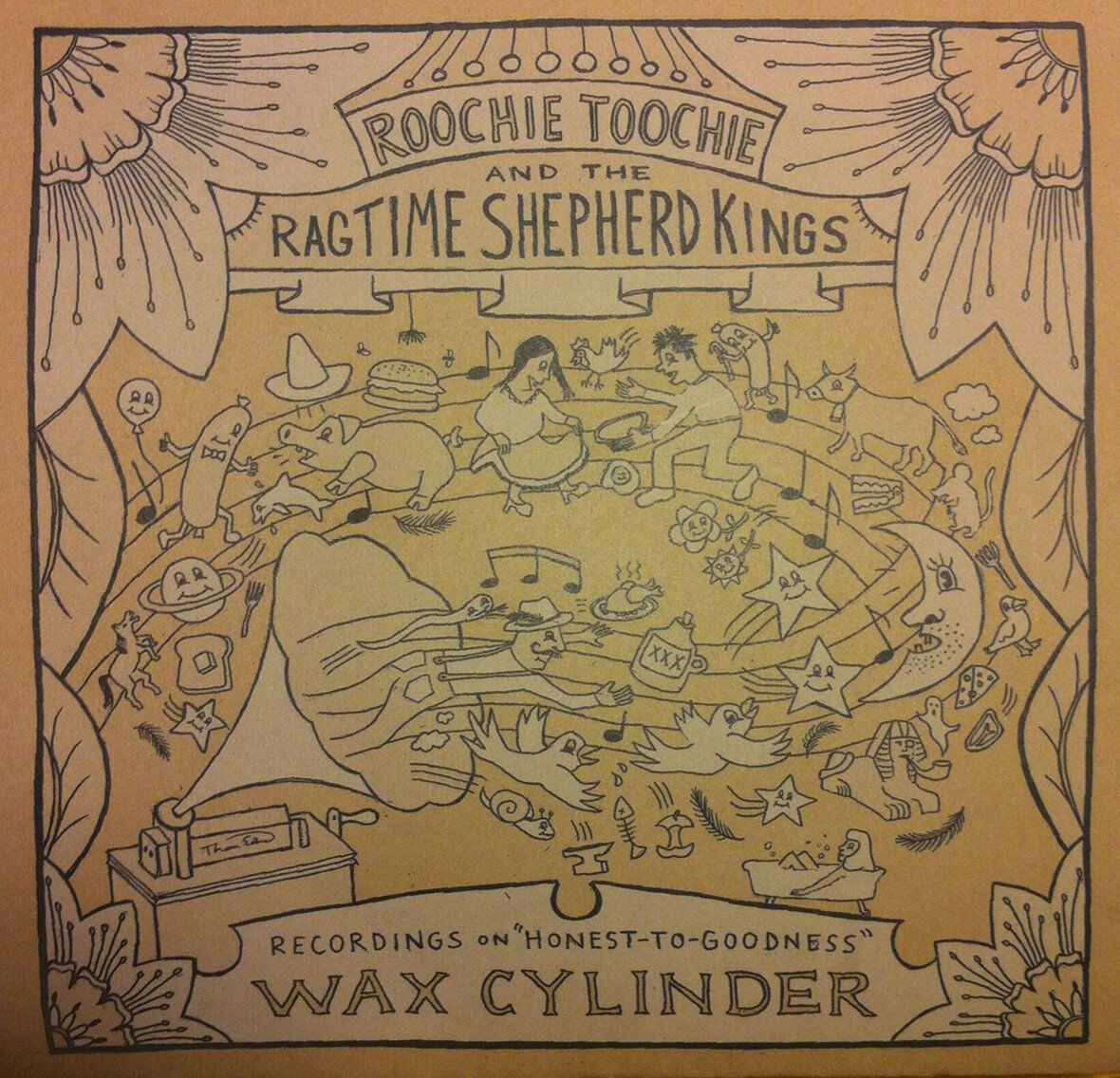 We’ve covered a number of artists in the last several years who have recorded to wax cylinder, usually under the guiding eye of Colin Hancock. A number of others have dusted off 1940s equipment to cut 78s with all the fidelity of those peeling home acetate recordings of the period. Many others record to one vintage microphone, with the band recreating the positioning of their forebears as if around a recording horn, and many if not most attempt to utilize vintage instruments or equipment at least some of the time. That is all to say, these days all the kids are doing it.

But of course someone had to be ahead of the pack and I think I’ve found a contender for first mover. Roochie Toochie and the Ragtime Shepherd Kings were formed in 2013 with the express mission of recording an album to “Honest-To-Goodness” wax cylinder.

The band has been busy since last summer on what they call their “Maine Songs Tour” which brought them across New England and into far northern New York, which is how I became aware of them. An attendee at their Mace Chasm Farm show in Keesville, NY sent me their CD. Their brand of revival vaudeville found an enthusiastic audience across rural New England among hipsters and townies alike. This is a tight knit region that held onto the tradition of community minstrel shows, at least in modified form, decades longer than you might think possible, into the 2010s at least. A non problematic presentation led by young people mixing comedic skits, old timey ragtime and jazz, with fine musicianship and a spirit of good clean fun makes them welcome at any Grange Hall, firehouse, organic farm festival, or Burlington night spot. The group, whose members live in several different states, have also been featured at old time festivals across Appalachia and as far away as Hawaii.

While the “Maine Songs Tour”, which is sponsored by the Maine Bicentennial Commission, implies they have a new set of material that might make for an album, so far their only release is the set of wax cylinder recordings the band originally partnered up to make. It’s an exceptional album, one I wish I knew about sooner, a rare attempt at recreating the authentic experience of a vaudeville performance at full length.

It was recorded in Tennessee under the supervision of Martin Fisher, a curator and recording archiver at Middle Tennessee State University. Aside from the typical far away tone of the medium the sound quality is great. The track selection and more importantly the presentation feel like they could have been recorded right off stage in 1905. A string band with uke, banjo, fiddle, a variety of guitars and a “toy menagerie” the instrumentation fits the most common of the period.

Titles include fun discoveries like “I’m Afraid of Bees” and “Little Timmy’s Backdoor Bungalow”, a few period titles that may still be familiar including “My Isle of Golden Dreams”, “The Moon Shines on the Moonshine” and “That Old Gang of Mine”, and perhaps anachronistic jazz numbers like “Tiger Rag”, “Doin’ the New Low Down”, and “‘Taint No Sin (to Dance around in Your Bones)”. The CD includes 23 tracks, the Bandcamp edition only 17 for no obvious reason. My CD also has a full color version of the artwork shown only in outline on brown on the Bandcamp page.

Timothy Findlen, the ukulele player, is the only native of Maine in the group, he even has a degree in the “History of Maine Humor”. Lindsay McCaw plays “fiddles and whatnot”, from Detroit, she has a background in puppet theater, including with the famous Bread and Puppet of Burlington, Vermont. She is also a promotor of period dance and a founding member of the Detroit Square Dance Society. Originally from Oregon, Matt Bell has resided in New Orleans since being sent there as a firefighter after Hurricane Katrina. He is a founding member of Aurora Nealand and the Royal Roses and plays guitar with a number of other groups in the city. Joy Patterson plays toy instruments and percussives, also out of New Orleans she plays washboard for a number of projects and hosts traveling roots groups at her All- Star Covered Dish Country Jamboree. Aaron Jonah Lewis plays violin and banjo on the album, also from Detroit he is considered a top virtuoso in contemporary banjo, deep diving into the catalogs and careers of early performers. Lewis seems to have been replaced on the current tour by Joel Jackson, also of Detroit. The current troupe also features Maura Gahan, a dancer, and important full time member of Bread and Puppet.

That I have been unaware of this group until now shows how unnecessary the siloing of Traditional Jazz from other traditional American music is. Many early jazz bands would find themselves welcome at bluegrass and Americana festivals, and a few of the groups at those festivals, like this one, play ragtime as authentic as you will find this side of 1900. The next time the Shepherd Kings travel though you’ll find me in the front row, and if they produce another album, whether to cylinder, CD, or cassette tape, I’ll be quick to buy it.