For many admirers, a personally signed autograph is a treasured keepsake. For over fifty years I avidly accumulated these bits of personalized ephemera. It all began when my Father stopped our car on the way to my grandmother’s home in Independence, Missouri, one day. Dad spotted a strolling Harry Truman and the ex-president paused to sign an old envelope for me. He pleasantly autographed the scrap, patted me on the shoulder and strolled on with only two (as I remember) suited gentlemen tagging along behind him.

I accumulated hundreds of autographs over the next decades either gathered in person or by mail in most cases, and that gave me a sense of personal acquaintance with these notable men and women. As with many of my collections, I have given most of that one away in the past few years and now others can share that sense personal connection I had.

That brings me to perhaps the most famous autograph in the world of ragtime and syncopation, that of Scott Joplin’s. I came close in 1974 to the composer’s signature when John Stark III loaned the famous “Maple Leaf Rag” contract to us during the first Scott Joplin Ragtime Festival in Sedalia. In near disbelief, I found myself holding the original document signed by Joplin, Stark, and witness, R.A. Higdon. My effort to purchase the treasure was politely declined and Sedalia missed the opportunity to regain this important document for its archive. 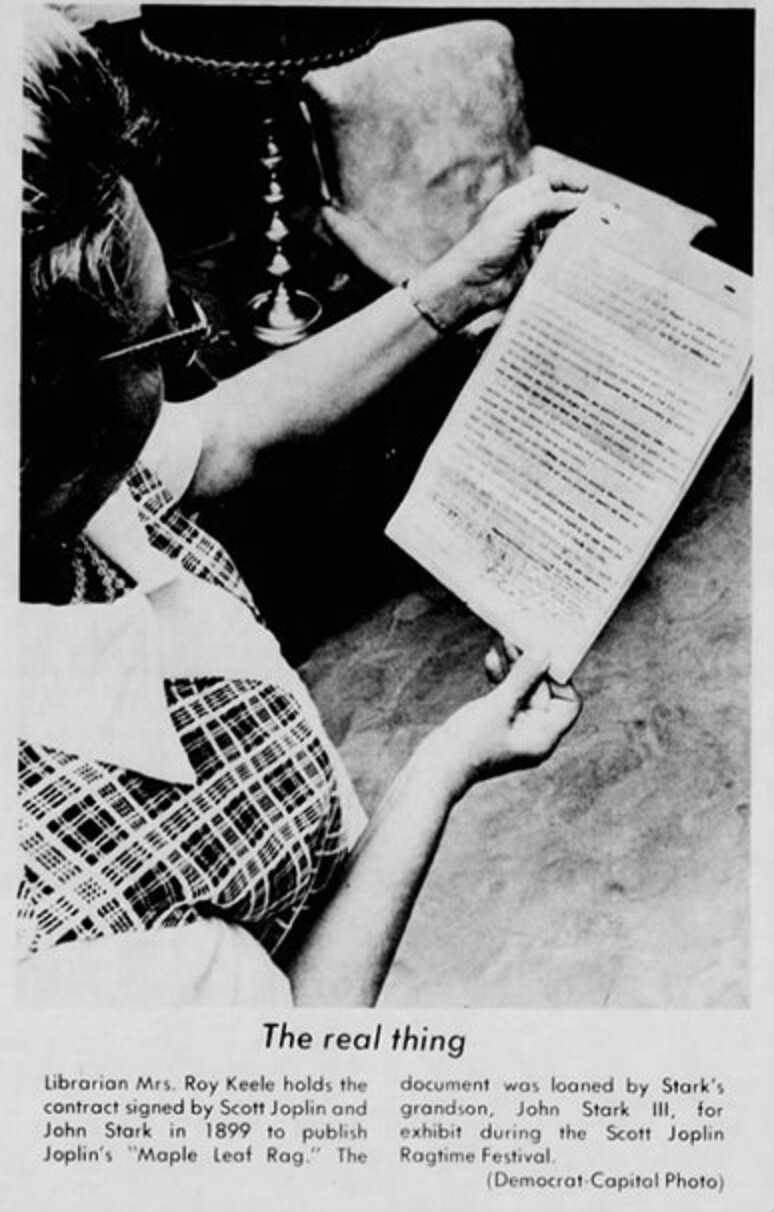 A 1983 an American Music article by James Fuld, the notable collector of music manuscript autographs revealed there are only three known examples of Joplin’s signature: the “Maple Leaf Rag” (MLR) contract, the American copyright applications for seven of his works with a letter and note in the US Copyright Office, and Joplin’s printed Treemonisha piano-vocal score with notes in his handwriting. Mr. Fuld purchased the contract from the Stark family in 1980, and Chris Ware, ragtime illustrator, author, and historian, purchased the opera score from the estate of Rudi Blesh in 2015.

As an aside, James Fuld had authenticators determine that the handwritten additions to the contract were by two individuals thought to have been clerks in Stark’s office. I will not be surprised if it is checked again that those additions were written by members of the Stark family.

James Fuld died in 2008 and much of his massive collection including the MLR contract went to the Morgan Library & Museum, Music Manuscripts and Printed Music Collection. For half a year now, I have been privileged to have correspondence with the curator of that collection, Dr. Robinson “Robin” McClellan. His experience and expertise make him a perfect steward of this collection and his excitement about his work is contagious.

He has shared descriptions of many of the Morgan’s Joplin and ragtime related holdings and it is my hope that he will be able to mount a future well publicized exhibit of Joplin related signature items. I do not expect this any time soon as his list of upcoming projects is daunting, but I am confident such an exhibit will be eventually forthcoming.

I encourage you to visit Dr. McClellan’s page on the Morgan Collection website titled, “A Millennium of Music at the Morgan, Parts I & II,” and his own web site at robinsonmcclellan.com.

I conclude with an observation and challenge. For years researchers and collectors have been ferreting out historic ragtime and jazz ephemera. A great deal has been found and many original piano rolls, recordings, and sheet music publications are bringing higher and higher auction prices.

Many items have long ago been given up as permanently lost. However, the advent of an increasing number of searchable publications—especially newspapers—make it simpler to know where to search for this important material. For example, thanks to many searchable newspapers from the ragtime era, we are now able to trace Joplin’s movements more accurately around the country, including some of his programs and the venues where he performed.

It occurs to me that in old or abandoned theaters, churches, and venues where Joplin made appearances, there may well be valuable documents related to the composer’s performances. I note the recent report of a massive collection of old orchestrations discovered in an old theater building. There is likely other material that has survived with those kinds of music manuscripts.

Joplin often performed in churches or African American social halls and in Caucasian establishments as well. Those groups may well have old documents stashed away in cartons long forgotten. The financial incentive to locate early music related documents and artifacts may serve to bring old treasures to public attention.

As a graduate student 55 plus years ago, I discovered the papers of the Superintendent of the 1876 American Centennial Commission in deteriorating boxes in an Indiana library basement. As Americans we have a “trash or stash” mentality about ephemeral items not of immediate interest. It is left for intrepid researchers to come along, motivated by scholarship or financial reward, and meticulously locate these stashed treasures, often in unpleasantly dank and dusty realms not generally very inviting.

Join me in blowing off the dust…