I was writing an autumn poem for our local nature reserve newsletter this morning describing family trips I remember as a kid.

I grew up in Kansas City and each autumn we would take old Highway 24 out through Independence all the way to the Waverly bridge that took the old road North of the Missouri River. I had Campbell, Slusher, and Bates relatives all along the route and we stopped at produce stands along the way as we went to visit the clan.

When we went through Dover, MO (between Lexington and Waverly) I would recall “Put on Your Old Grey Bonnet“, Percy Wenrich’s old song with Stanley Murphy’s lyrics and I looked up the words to fit into my rhyme. I had forgotten the introductory verses and was pleased to find Silas hitching up the old shay for his wife Miranda (sitting of course on the Veranda) so they could go up to Dover on their golden wedding day. (that Dover was down by Joplin, Missouri I understand.) 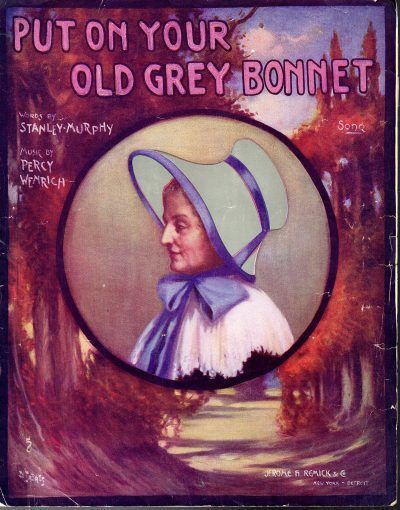 So many of the old Tin Pan Alley songs have come down to us as refrains and the verses have been long lost. Max Morath reminded me that introductory verses were more or less mandatory in the early days of song writing from Stephen Foster repetitions within his verses on to World War II. The verses set up the refrains until only the catchy lyrics and melodies of those choruses were remembered. Thus, we have come to neglect Miranda’s meltdown over Silas forgetting their 50th anniversary, resulting in their ride through the clover.

Rarely do we hear those original song introductions when the old standards are played. Modern song writing is all about rhythm and three-word repeated lyrics, usually involving love and babes.

I looked up some old favorite refrains we’ve heard all of our lives. Occasionally we hear the first verse to “Jingle Bells.” “Dashing through the snow…” and occasionally the one about Miss Fanny Bright. But rarely do we hear the third verse sung. Now the ground is white/Go it while you’re young/Take the girls tonight/And sing this sleighing song/Just get a bob tailed bay/two-forty is his speed/Hitch him to an open sleigh/And crack! you’ll take the lead.

Sidney Brown’s lyrics for Joplin’s “Maple Leaf Rag” have verses for the chorus but most people know neither. However, I recall that Joplin’s “Pineapple Rag,” had a two-verse introduction by Joe Snyder that set up the theme refrain as well.

Even the Gershwin’s used introductions in songs like “Someone to Watch Over Me” and “The Man I Love.” Nearly every song had an evidently forgettable introduction, and it is a shame many were lost in later recorded arrangements as they were instrumental in setting up the meaning of a refrain. My all-time favorite is Cole Porter’s self-deprecating introduction to “It’s De Lovely.” I feel a sudden urge to sing/The kind of ditty that invokes the spring./So control your desire to curse,/While I crucify the verse./This verse I’ve started seems to me/The Tin Pantithesis of melody./So to spare you all the pain,/I’ll skip the darn thing/ and sing the refrain.

As the old standards became part of the campfire songbooks of the post-WWII era, the old refrains made a comeback usually with wonderful harmonies that wafted with the smoke over the youth of my generation. However, the introductory verses were often lost in the flames. My Sunday school group included a handsome fellow, who was quite a crooner. His mother was a popular lounge vocalist, and her son knew all the intros. He would begin our singing with a verse a cappella and we would join in on the chorus. Marilyn Maye is still a classic by the way.

Writing of campfire songs, I’m reminded that most of us always knew the first verse of “Home on the Range,” but few knew the other six or so stanzas and that is just as well, since some versions weren’t very politically correct.

So too, our favorite popular patriotic songs usually had introductory verses and sometimes endless additional stanzas all printed over a familiar chorus. The introductory verse to “America, the Beautiful” by Katherine Lee Bates, is generally well known and was originally inspired by her trip to Pike’s Peak (Purple Mountain Majesties.) “God Bless America,” by Irving Berlin, also comes to mind but we usually sing verse and refrain together with that old favorite.

I have to wonder if the idea for these song introductions didn’t evolve from the old church hymns. Most of the 19th century hymnal compositions were poem stanzas atop a repeated chorus. However, unlike popular music, I noticed over the past few decades, that church music leaders tend to use all the verses but the choruses are only added to the first and final stanzas, a nod to the clock and uncomfortable pews, I presume.

Fifty years ago, during an ancient incarnation as a middle-school English teacher, I discovered my middle school students had an aversion to poetry. So, I rather quickly converted them by illustrating how much of their popular music (of that still enlightened era) was poetry set to music. We then read the printed lyrics of Paul Simon’s “Bridge over Troubled Waters” and I used it to teach the elements of verse and refrain in poetry, especially poetry set to music.

In the course of this brief column, I have mind-bounced from an autumn drive in the countryside to Paul Simon like a flat stone skipped across a quarry pond by a truant schoolboy. Such is the mental process of aging (and of confession).