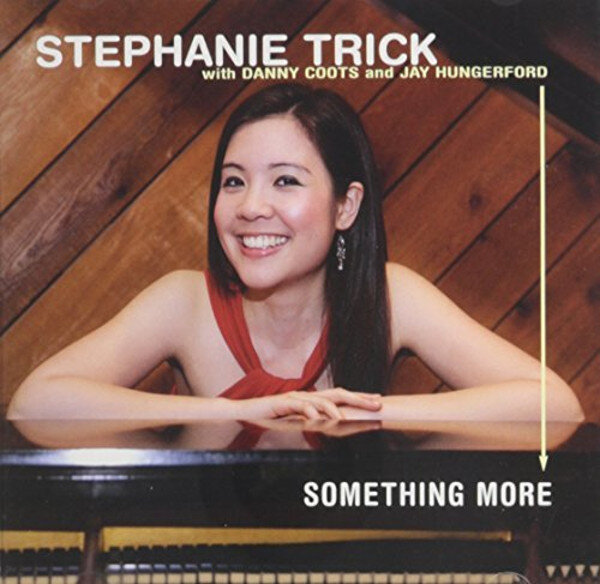 Stephanie Trick’s horizons keep expanding. When we first met her, she was playing ragtime, but she soon mastered Scott Joplin and moved to stride piano, ragtime’s urban cousin, where she has wowed audiences both at home and abroad. Thus, it should come as no surprise that this CD edges into the field of jazz.

There is much to like on this disc. Trick includes some classic stride numbers (Rosetta, The Minor Drag, Valentine Stomp and Keep Your Temper) plus a couple of new contenders (Jubilee Stomp and Look Out, Lion, I’ve Got You!), but she also plays a number of cocktail standards that begin with lush arrangements before bursting forth into stride mode – a technique pioneered by the legendary Donald Lambert. There are also some out-and-out ballads (Two Sleepy People and These Foolish Things) to prove that she can sustain a romantic melody to the end. Incisive but never overpowering percussion is provided by Danny Coots, who seems to be the sideman of choice on everybody’s CDs these days, while Jay Hungerford lays down a solid bass line spiced with occasional solo flights.

Trick’s entry into the mostly male dominated stride genre may have been viewed initially as a novelty, but she has more than proved not only her mettle but her audience appeal, inspiring Dick Hyman to write in her liner notes that she “has now become a strong link in our tradition, and we couldn’t be more delighted to welcome her.” Her combination of speed, accuracy and dynamic control has made her immensely popular on the festival circuit. A special treat is her boogie woogie performance of Meade Lux Lewis’ Honky Tonk Train Blues, proving that there may not be a genre anywhere that she can’t conquer.

Harlem stride piano is an extension of ragtime, an urban treatment that crosses the line between rag and jazz. With this recording, Stephanie Trick certainly proves that she can handle the jazzy side with the best of them.

Rosetta / Jubilee Stomp / I’m Gonna Sit Right Down and Write Myself a Letter / Look Out, Lion, I’ve Got You! / Medley: You Took Advantage of Me; Taking a Chance on Love / Honky Tonk Train Blues / In the Shade of the Old Apple Tree / The Minor Drag / These Foolish Things / Valentine Stomp / Tango Seville / Passionette / Two Sleepy People / Black Beauty / Keep Your Temper

Available on Amazon or Direct from Artist