One of New Orleans’ most unabashedly entertaining jazz combos—the Dukes of Dixieland—started out in the late 1940s strictly as a family affair featuring brothers Frank Assunto, trumpet; Fred Assunto, trombone; and their father, Papa Jac Assunto, who played both trombone and banjo.

Prior to 1949, the Assuntos often played under the name the Basin Street Four. Their big break came when trumpeter/bandleader Sharkey Bonanno decided to take his Kings of Dixieland band on the road and left open what had been its regular engagement at the Famous Door on Bourbon Street. At a dinner-table discussion, Mama Josie Assunto suggested they rename the group in honor of Sharkey’s band, as the Dukes—rather than the Kings—of Dixieland.

The band was often billed as Frank Assunto & The Dukes of Dixieland. 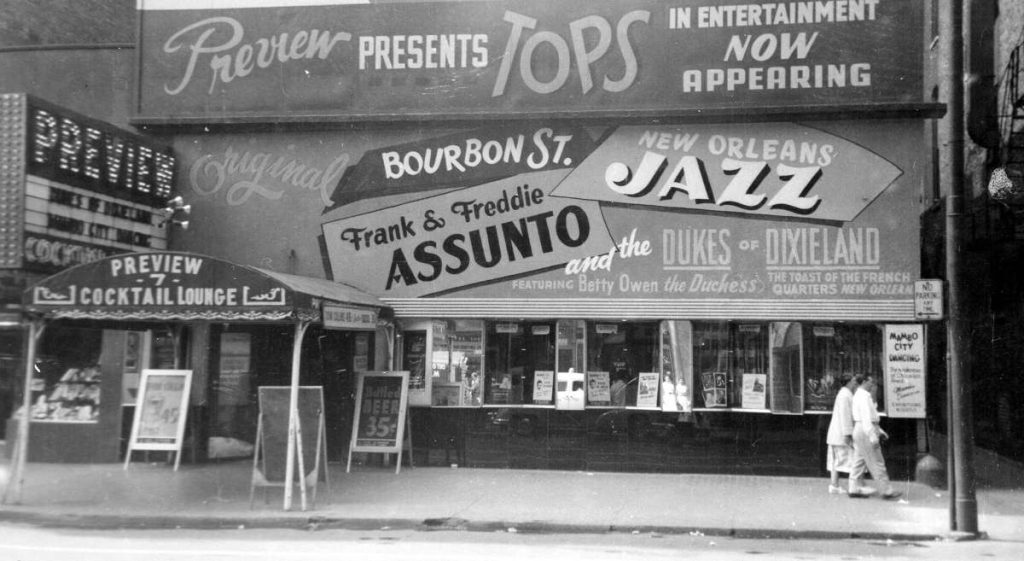 For much of the 1950s and ’60s, the Dukes of Dixieland were considered the number-one jazz combo in the country. For eight consecutive years, the band was listed as such in Playboy magazine’s annual Jazz Review.

“But the Dukes also had their critics,” wrote Steve Steinberg in a recent article in offbeat magazine.
“Serious jazz fans and true aficionados were extremely serious in those days,” Steinberg wrote, “and the Dukes were just a bit too cute, too slick, too fancy-looking in their sharp clothes and hats and shiny shoes to be taken seriously…The critics said, ‘They’re too commercial.’ The fact is that despite their obvious first-class musicianship, the Dukes suffered from that age-old New Orleans disease of wanting to be entertaining.”

Fred and Frank Assunto both died young—Freddie in 1966 at age 36 and Frank in 1974 at age 42—and the original Dukes of Dixieland disbanded. But the name would live on, if without the blessing of the Assunto family.

Shortly after Frank’s death, a new version of the Dukes of Dixieland hit the scene with Connie Jones as leader. The band leased Louis Prima’s nightclub atop the Monteleone Hotel in the French Quarter and renamed it Duke’s Place.

Fast forward more than 20 years. To regain the rights to the Dukes of Dixieland music, Frank’s son, Deano Assunto—a New Orleans-area printer—dug in for a decades-long courtroom drama.

“Somebody is using our name or heritage, I should say, and the legacy of our father without our permission,” Deano testified in a 2010 deposition for the New Orleans Civil District Court. “Everything my father worked for was being scavenged by other people.”

It was a protracted and bitter battle, but five years ago the court agreed with the Assunto family. Deano and his relatives won back the ability to collect royalties from all of the Dukes’ pre-1974 music, including the recordings on Audio Fidelity which sold in the millions and the two sessions the band did with Louis Armstrong in 1959 and ’60.

“It took many years, but he got those rights back,” said Jim Syoen, a tuba player who—along with Deano—co-manages the newly formed combo called The Assunto Dukes, a Dixieland Tribute.

The Assunto Dukes will headline the 71st anniversary of the New Orleans Jazz Club, considered America’s oldest jazz club. The event takes place on Wednesday afternoon, May 1, at The Sheraton Hotel at 500 Canal St., in New Orleans.

Last December, the septet appeared on WWL-TV in New Orleans and swung the studio with tunes like “Bourbon Street Parade.” The band’s vivacious vocalist, Lexie Assunto—Frank’s grand-daughter—delivered a delicious version of the ODJB’s 1921 hit, “Jazz Me Blues.”

As a toddler, Lexie learned to sing by listening to her Great Aunt Betty Owens—Freddie’s wife. Betty had performed and recorded with The Dukes of Dixieland as “The Duchess.”

Other tunes in the new band’s repertoire include “Slide Frog Slide,” which famously featured Freddie’s trombone, as well as “Sweet Georgia Brown” and one of Lexie’s favorites, “My Blue Heaven.”

“The Assunto Family has been making music in New Orleans for five generations,” Deano said last month. “And we’re doing it again with The Assunto Dukes. We play a monthly gig at Mo’s Chalet, in Metairie, on the last Sunday of each month.”

They also participate regularly in the New Orleans Jazz Club jam sessions, just as Frank and Freddie did more than 70 years ago when they were still called the Basin Street Four, Five, or Six, depending on how many musicians got hired.

Syoen enjoys working with the outfit he and Deano have assembled. “All of the guys that we’ve recruited for the band are in it for the right reasons,” he said. “They all have great appreciation for the style, look and even the swagger that the original Dukes had, and they love being in a band that replicates that style.”