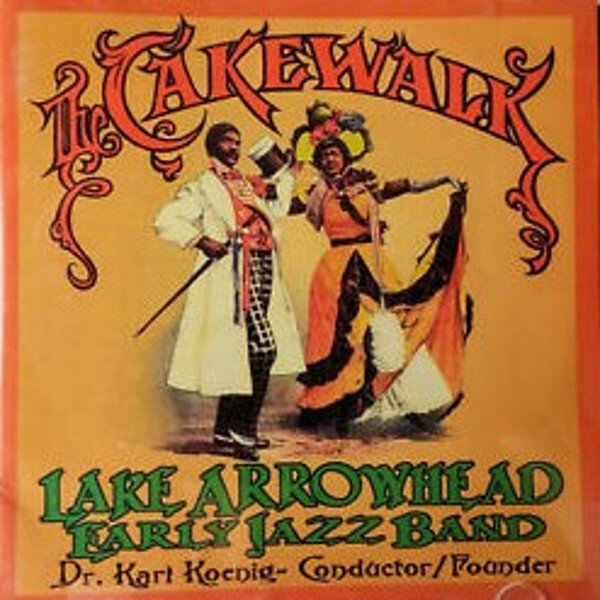 When I was first learning about ragtime, I kept encountering references to the cakewalk, all of which seemed to assume that the reader already knew what a cakewalk was.  How I wish I had had this disc, for I would not have stumbled around in the dark for such a long time.  By the time you read Karl Koenig’s illuminating notes and listen to this CD in its entirety, you will know what a cakewalk is.

All of the selections are very march-like, which is historical homage and which is reinforced by the predominant brass, the reedy filagrees and the omnipresent snare drum (augmented occasionally by the cymbal and tambourine).  With a lone exception, “Coontown Capers”, all are played at or near a medium tempo.  The recording includes as much variety as can be incorporated into a harmonically simple, lightly syncopated form that eschews solos by any of the instruments.

There is a pleasant mix of standards and rarities and the best cakewalk composers of the day, such as Abe Holzmann, Arthur Pryor, Kerry Mills and J. Bodewald Lampe, are all represented.  While it is reassuring to hear the familiar tunes, I was quite taken with several of the forgotten ones, such as “Cotton Pickers Rag and Cakewalk”, “A Warm Reception”, “Shuffling Jasper”, “Southern Hospitality” and “The Darkies Drill”.

To quote Koenig, “The most popular purveyor of American popular music during the evolution of jazz was the military or concert band…”  This music apparently is a bottom rung on that evolutionary ladder, for 17 of the 23 selections were published before 1900 and everything is played from ensemble scores.  It is, however, a re-creation of a period military band and there is just enough lack of extreme precision here so that we know it is a hometown band and not the ghost of John Philip Sousa holding the baton.

This is an historically significant recording, the likes of which is found nowhere else in the ragtime catalog, and kudos go to Stomp Off’s Bob Erdos for producing it.  At the risk of some monotony, Karl Koenig has assembled a slice of Americana that has largely been overlooked in other musical arenas and the Lake Arrowhead Early Jazz Band performs these cakewalks with verve and charm.

It is also a grim reminder of the prejudice that existed then, for a quick glance through the playlist reveals a number of titles that would be offensive to today’s African-American.  In 1913, Scott Joplin said, “I have often sat in theaters and listened to beautiful ragtime melodies set to almost vulgar words…and I wondered why some composers will continue to make the public hate the ragtime melodies because the melodies are set to such bad words.”

There is an abundance of good music here, but I fear the public will continue to ignore much of it because of some racist titles.  It was a period in our social history that we cannot erase and I hope it will not deter anyone from purchasing this CD and enjoying these wonderful cakewalks.