Going all the way back to the end of the 1880s, when commercial recordings were barely a concept, Edward Issler was hired as the first on staff musician in recording history. In 1888, Edward Issler and his small parlor orchestra made a handful of test records for the Edison Phonograph works, a few that were even given titles. In the next year, 1889, Issler became Edison’s first lab pianist, playing there almost every day for instrumentalists and singers of every kind. 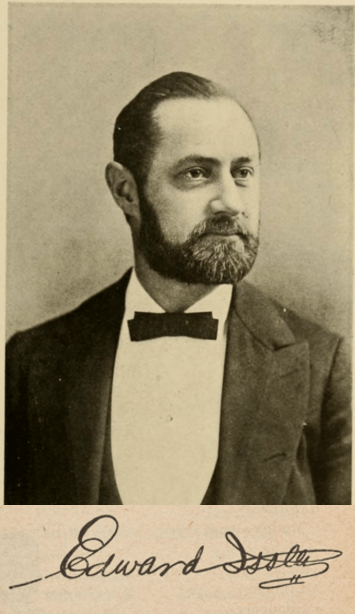 But before all that recording began, Issler’s upbringing was quite typical of the era. Issler was born in 1855 to a Bavarian beerseller and a Prussian housewife. He grew up selling beer in an entirely German-Prussian neighborhood in Newark, New Jersey. Starting in the 1870s, Issler began working as a music teacher, trying to make ends meet in a crowded industry. By the mid-1880s Issler was working regularly in pit orchestras, and it was here that he met all his parlor musicians. By 1886, he had his orchestra together and started writing arrangements that would be used on his recordings later.

From 1889 to 1893, Issler’s name appears on almost every page of the Edison-North American phonograph ledgers. Many of the pages with his name scrawled in pen were in his own handwriting.

Among the things that Issler recorded in this period were a few piano duets with his flautist George Schweinfest, and a few accompaniments for the first African American recording star, George W. Johnson. Issler played some of the first overtly syncopated melodies ever recorded for Mr. Johnson. Rhythms that would not be heard again on record until the end of the 1890s.

In 1893, Issler joined the newly formed United States Phonograph company, based in his hometown of Newark. It was at U.S. that Issler made the bulk of his records. In this era there was no master record used to press others, each recording was unique and to meet demand a band had to record a tune over and over again. The exact number of records he made while at U.S. will never be known, but he and his orchestra recorded tens of thousands of cylinder records between 1893 and 1897.

Issler was a clever arranger, being that he had only six musicians (most often five), he had to write out many of his own arrangements of popular tunes. The instrumentation of his orchestra most often consisted of a piano, flute/piccolo, cornet/trombone, clarinet, and percussion. His options were limited, but his creativity seemed limitless. Many of his arrangements, including his arrangement of the “Cocoanut Dance” was still being recorded as late as the mid-1920s. Other studio orchestras recorded Issler’s tunes long after he left the recording business.

Outside of the studios, Issler made sure to keep his musicians fairly employed, playing many regular engagements in Newark, and occasionally being included as part of a phonographic program. His name appears often in local papers as the leader of his small orchestra, as well as a larger orchestra that frequently played community events and concerts.

Issler continued to make records regularly until 1897, when he seems to mostly stop. It is unknown why Issler left recording so early, but it’s possible there was a labor dispute.

Issler was a musicians’ advocate, being part of the Newark Musicians’ union, and throughout the 1890s, he rose his way up the union’s managerial ladder. This was good for Issler, but bad for the recording management, as he was wising up to the value of the work he was doing. In 1897, Issler was working for the Columbia Phonograph company, but he did not remain there for long, as his much younger and raggier successor, Fred Hylands, made his way in as chief accompanist.

Issler sporadically made records between 1897 and 1900, occasionally as an accompanist, but mostly as the leader of his small orchestra. He made no records after 1900, but he most certainly kept busy after all that exhausting recording. Without a doubt he must have been glad to have all that behind him, no more six days a week of performing two songs 300 times. He had moved on to bigger things in his community.

By 1903, Issler was the president of the Newark Musicians’ Union. This was no small thing in this era, as Newark was where all the musicians lived; it was cheaper and nearly a stone’s throw from Manhattan. Most of the studio musicians lived in Newark while he was recording, though luckily for him, as the years went on he had fewer studio scuffles to deal with. Most of the studio musicians had moved out of Newark by 1905.

Around the middle of the 1900s, Issler had some personal woes. In 1879-1880, Issler had married Hannah Wade, and around 1905 her name disappears from public records. It has not been confirmed whether she died or divorced Ed, but it’s more likely that she died. Ed remarried quickly to a woman named Jennie.

To add to his troubles, Ed’s daughter Helen was an unconventional girl of the era. She lived at home with Ed and her stepmother into her 40s, remaining single all of that time. Despite this, Hannah helped to keep her father’s legacy alive and well into his fading days.

She was an accomplished pianist, and often was mentioned in local papers as a popular musician in the area. Around the end of the 1910s, the local papers often mentioned the prominent and accomplished Isslers. This referred to Helen and Ed hosting gatherings at their home with some of Newark’s most distinguished folk.

Throughout the 1900s and 1910s, Ed’s name appears in many regular newspapers, both as a Musicians’ advocate and also as a bandleader. But by the mid-1910s, his influence had faded. He had few regular “gigs,” but was able to sustain a steady income (thanks to his advocacy in the musicians’ union!).

He died in 1922. For years it was assumed that Issler had died not long after he stopped making records around 1900, but this has been proven entirely untrue. He lived long enough to see how far his arrangements went in the business. Some were played into the 1920s, but he was never credited as the arranger for any of them. His name seemed forgotten.

Issler’s legacy did not revive in the record scholars’ reports and writings of the succeeding decades. Only in the last decade or so has Issler’s history and influence been truly discovered. As late as 2010, most scholars of early recordings had Issler’s lifespan as (1855-?). Writers like Jim Walsh skipped over Issler, only mentioning him a handful of times in extensive writing from the 1930s to 1980s.

Even with these recent findings, what we have now is only a brief sketch. Most of the information is very scant on him, but what can be pieced together makes for a tantalizing story of a caring man with unfortunate demons. His countless records are scattered all around the internet and in libraries. No two records of his are the same, as he worked in the era where he would play the same song 50 times a day to meet the supply and demand of phonograph arcade owners. His sacrifice lives on through the hundreds of surviving pristine copies of his records.