The Well-Dressed Gentlemen of Jaunty Anglo-Jazz

The Washboard Resonators are a joke. Or rather, they were supposed to be—Leeds City Stompers musicians Martyn Roper and Jack Amblin plucked the alias out of thin air, when a booking agent asked the name of their two-man side project.

“To this day, we still don’t know if it’s a really good name or a really bad one,” said Martyn, from Huddersfield in West Yorkshire. Good or bad, it’s an apt moniker for a duo armed with resonator guitars and gadget-packed washboards. That said, this two-man band packs more musical heat than most.

The tooled-up pair are on a mission to spread lesser-known jazz, blues, and happiness around the UK, putting a peculiarly British spin on some very American music. “We travel with more kit than most trios do,” said Martyn. “There are guitars, banjos, ukuleles, a drum kit, washboards, and Jack’s tap dancing board.” 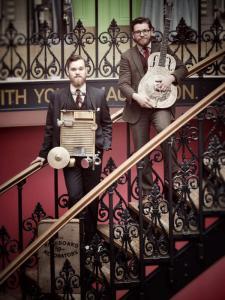 The duo met five years ago at a jazz bar in Leeds, West Yorkshire while playing with different outfits—relative youngsters amongst the “silver-haired” regulars. Bonding over stories of bandmate woe, bassist Martyn and Welsh drummer Jack decided to team up. The result was the Leeds City Stompers—a three-man band featuring guest singers, whose fluid membership keeps classic jazz and blues kicking at around 40 functions and festivals a year.

But Martyn and Jack had their own special interests, plus an urge to write their own material. Former rocker Martyn is a blues aficionado, with a soft spot for Blind Boy Fuller and Tampa Red. Jack is more of a swing fan, who idolizes drummers Papa Joe Jones and Zutty Singleton. “One day we decided to go busking and play this stuff,” Martyn explains. “People were just crowding around us—at one point Jack was playing a lamppost with thimbles, washboard around his neck. It worked really well.”

The duo shares the singing equally. Both are slightly reluctant frontmen, after years supporting others from upstage. “As a drummer and a bassist we’re both backroom boys and team players,” said Jack. “I think that’s why we’re going from strength to strength—because neither of us is someone who really wants the limelight.”

They put some videos on YouTube, earning over 130,000 views. Their rendition of “I Got Rhythm” garnered 98,000 alone, while “Sheik of Araby” got over 19,000. Appearing under their own names, they started picking up gigs at local pubs and bars. One day their agent suggested shopping centers—but needed them to choose a name. “As a joke, I just said The Washboard Resonators,” said Martyn. “Because there are so many great jazz bands with rubbish agent names like Jive Time or something. I said we’ll just use that name to do a few little gigs. But people were really interested in us and now we’re stuck with it.”

Jack added: “We’ve really stumbled into this, but a lot of bands started the same way. It’s allowing us to realize a lot of dreams, like writing risqué comedy songs or emulating Fred Astaire.”

The ambitious pair decided to make the Washboard Resonators—“a ragtime street band meets a Hollywood musical on a theatre stage, somewhere in around 1932”—their main focus. They play around 150 gigs a year, mixing real classics with raunchy originals, donning three-piece suits and working music hall (or vaudeville) comedy into their act.

“We’re always looking for ways to expand what two small, beardy men can do on stage,” said Martyn. “There’s only so much people can take of two guys with high voices, singing and playing little instruments. That’s why we’re always adding things, like the suitcase bass drum. When Jack said he was taking tap dancing lessons I said great, this band is just the vehicle to try that with. Then we started bringing in the Max Miller-esque comedy element.”

Jack’s washboard (not his first—that smashed when it fell out of a van) is also expanding, accumulating adornments, drawing the ire of some purists. The laundry tool is kitted out with bells, whistles and cymbals galore. “There’s even a sugar bowl on there,” said the percussionist. “Some guys say it shouldn’t have anything on it, but I like the comedy appearance. Plus, adding things gives some texture and the occasional comedy sound. It keeps people interested in what we’re doing.”

Martyn added: “We started out playing a lot of rough-and-tumble pubs, where people weren’t really interested in watching or listening to us. We wanted to win them over and walk out with our heads high. So when they get bored I would pick up a banjo, or Jack would honk a horn or start tap dancing and people would take notice again.”

Wherever the Washboard Resonators go, they leave a trail of fans behind them—not just of their band, but the genres they play. Jack said: “Sometimes, when we tell people we play jazz, they think Miles Davis and they think it’s not for them. But often people will come up to us at the end of a gig and say: ‘I don’t know what that was, but I really liked it.’ Then we email them lists of other artists they should listen to.”
He added: “If you can keep them interested and entertained they develop a relationship with the music—then they come back and see you, or someone similar. It’s great to convert people like that.”

The talented twosome sometimes add kazoos in harmony, emulating the trad front line. The pair have even invented their own instrument, in an effort to replicate the sound of a bigger jazz band—the kasousaphone, which is a half-kazoo welded to half an old-fashioned bike horn. It sounds deeper than the average kazoo—more tiny saxophone than tinny trumpet.

The pair’s own material is in a raunchy hokum style—but with a very British twist. The themes of “Scrub That Thing” and “Much Too Tight” can be guessed at, while “My Car Has Shrunk in the Rain” is Jack’s calypso ode to Austin Minis. “Tap Dancing Tom,” a cheeky tune about a light-footed gigolo accompanied by Jack’s talented tap, could almost be a George Formby number.

“I used to be in rock bands, writing serious songs,” said Martyn. “I’d write bits of silly songs, but they would never go anywhere. This has allowed me to realize that dream and Jack has been very supportive.” Jack added: “The only rule we have is that we don’t do anything past 1949, musically or visually. That keeps us within an era and makes it easier to market ourselves.”

They occasionally reach into the bluegrass bag, pulling out gems like “The Sun Always Shines in Yorkshire and Wales”—a beautiful ballad about their homelands. “We just want to be authentic to who we are,” said Jack. “So we try not to sing in American accents—it’s a ragtime, hokum base but hopefully it sounds like us, as two British guys.”

The choice also comes down to comfort. “Us playing hard-driving delta blues would sound fake,” said Martyn. “Those guys were often illiterate, sang about the devil and their wild ways—it would be insincere for us to do the same. We tend to stick to songs about traveling and having a good time. Or songs about a woman you like, who doesn’t like you—I can relate to that more than I can songs about Jim Crow conditions.”

He added: “I think you need to write from a place of truth, about something which sits comfortably with you. And we couldn’t put on ridiculous American accents like Mick Jagger does, any more than we could do a Barbadian accent in the calypso songs.” 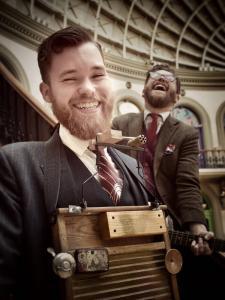 But the duo’s dedication to Britishness doesn’t diminish their affection for America. Their latest release is a five-track EP recorded at Sun Studios, in Memphis, TN—right where the Million Dollar Quartet once made rock ‘n’ roll history.

The plan was to visit Chicago and shop for vintage instruments—including a 1935 National Trojan resonator guitar. “We heard about these guitar and drum shows and thought let’s go for a long weekend, buy some stuff and eat some good pizza,” said Martyn. “Then Jack said he wanted to see New Orleans. I’d been before and I said he had to see it—to smell it and feel the humidity—to get a better understanding of the music from this colorful, tacky, rude place.”

Martyn then recalled a trip to Sun Studios in 2006, where bands still record for around $200 an hour, and a road trip began to take shape. They put the finishing touches on five original songs during a 500-mile drive from Chicago to Memphis.

Jack said: “The recording session was amazing because it’s like a time capsule. All the gear is from the same period that Elvis was there. The sound of that room is so familiar to so many people, because so many big hits were recorded there. There were marks on the floor where he and Johnny Cash had stood to record.”

Martyn added: “It all went through valve preamps and tape recorders before going into the computer for mixing, so it sounds beautifully analogue. The engineers put loads of slapback echo on it, as they would for rich rockabillies and their hobby bands. We said: ‘Can we take that off? We’re more of a 1930s jazz band.’ When they realized we were professionals, doing this to pay our mortgages, they got really excited and made a really good job of it.”

The Sun Sessions EP hasn’t sold as well as the well-dressed gentlemen of jaunty Anglo-jazz would like, but full-length debut “Scrub That Thing” has seen their following grow substantially. “We’re just starting to sell lots of tickets,” said Martyn. “We were selling fifty-odd tickets per gig last month, where two years ago we might have sold ten. So the Washboard Resonators name is starting to mean something—whether it’s a good one or not.”

Visit thewashboardresonators.com for more information about Martyn, Jack, and their peculiarly British blues.