What is the ‘Ragtime Life?’

What exactly was the ragtime life? At one time the term was used to describe a particular generation of young people. Much like any musical style that came after it, older folks didn’t approve of what it was doing to the youth. All of the same arguments against the emerging jazz style of the 1920s were used against ragtime nearly 30 years earlier. Many songs and novels spoke of this new lifestyle, but it’s not often that we actually hear of what it consisted of.

Just like the flappers of the 1920s, ragtimers had their own sense of style. While it could be argued that the unusual way of dress to become associated with ragtime started in the 1880s, it didn’t start to really come into form until the middle 1890s. Songs such as the 1884 hit, “A New Coon in Town” illustrated this particular style of dress. In the 1880s, men’s clothing could be very tight and form-fitted, something that would soon become signature to the fringe young men in the next decade.

Bright colored ties with a very broad knot came in around the early 1890s, and by the mid to late 1890s, most ragtime men could be seen with these types of ties. Photos such as the one of “Mississippi Rag” composer William Krell provide a great example of this tie style. What some may not know about these broad ties is that they were actually clip-ons. A band was placed at the edge of the collar, and the detached knot would have clips or pins to secure it in place. Pianists such as Fred Hylands often wore this style as well.

Men often wore graceful hairstyles with slightly curled ends. Some of the styles were very curly, and others very straight. Some men put their hair in curlers and used irons to achieve this look. This could have been done to imitate the illustrations of fashionable African American men that had been popular for decades by the 1890s.

It wasn’t just the men who took on a new style. Women took on a few similar characteristics that would be more familiar to us in 1920s history. Some women did indeed cut their hair short. In the early 1890s, the fashionable hairstyle for women was what would look to us like a modified pixie cut. Most women tied up their hair and left a bunch of fringe at the forehead, but some famous actresses like Lillian Russell and May Irwin cut it all off. In the 1890s, a style that looks somewhat like a flapper bob emerged among the most nouveau of young women. The style covered the ears and was curled into a mess, coping rather well with the wide silhouette that was popular for women in the middle 1890s.

With the emergence of the Art Nouveau style, lots of stripes and swirls became fashionable. Loud printed silks and cottons soon became a signature to ragtime style for women. As early as 1894, women were depicted on sheet music in loudly printed gowns cake-walking with their equally fashionable partners. Often the costumes that ragtime women were dressed in onstage included lots of stripes, dots, and shorter skirts to more comfortably cake-walk in.

Another important aspect to ragtime fashion was crossdressing. It might not be the first thing that people would think of, but if you have observed closely in the handful of cake-walk silent films that survive, there is at least one or two people crossdressing in the dance. Being that the folks who became ragtimers were most often theater people, it wouldn’t come as much of a surprise that many of them were queer. Even famous singers such as Clarice Vance and Helen Trix performed many songs onstage in full men’s attire.

An important aspect of the ragtime life was free love. Not only were there many rag songs about ragtime men and women getting into razor fights over their lovers, but these sort of stories happened in real life to the composers who wrote them. Cincinnati composer Robert S. Roberts apparently got into a fight over a woman and was slashed with a razor as a result. Many ragtimers went from one partner to the next quickly.

Fashion was only one aspect of the ragtime life, what more period sources talk about was the lifestyle surrounding those who decided to leave their “happy home” and live this life. Drugs and alcohol were rampant among those who danced to and played the music. As, before 1905, all the most harmful drugs we associate now with rock stars were legal and causing just as much harm then. Many of the most popular ragtime performers developed these habits whether it was known or secretly, and aged quickly from it. It can seem remarkable that a few of these performers and composers lived beyond their 30th birthday.

However, not all were so fortunate. A more famous casualty of the ragtime life was the St. Louis prodigy Louis Chauvin, who died at 27 after only a few years running around with the ragtime legends Scott Joplin and Tom Turpin. At the beginning of the 1900s, stories of ragtime casualties sprinkled in the pages of local papers. Young aspiring musicians and dancers taken by ill-transmitted diseases and drugs started to become commonplace in central hubs for ragtime, such as St. Louis and Chicago. 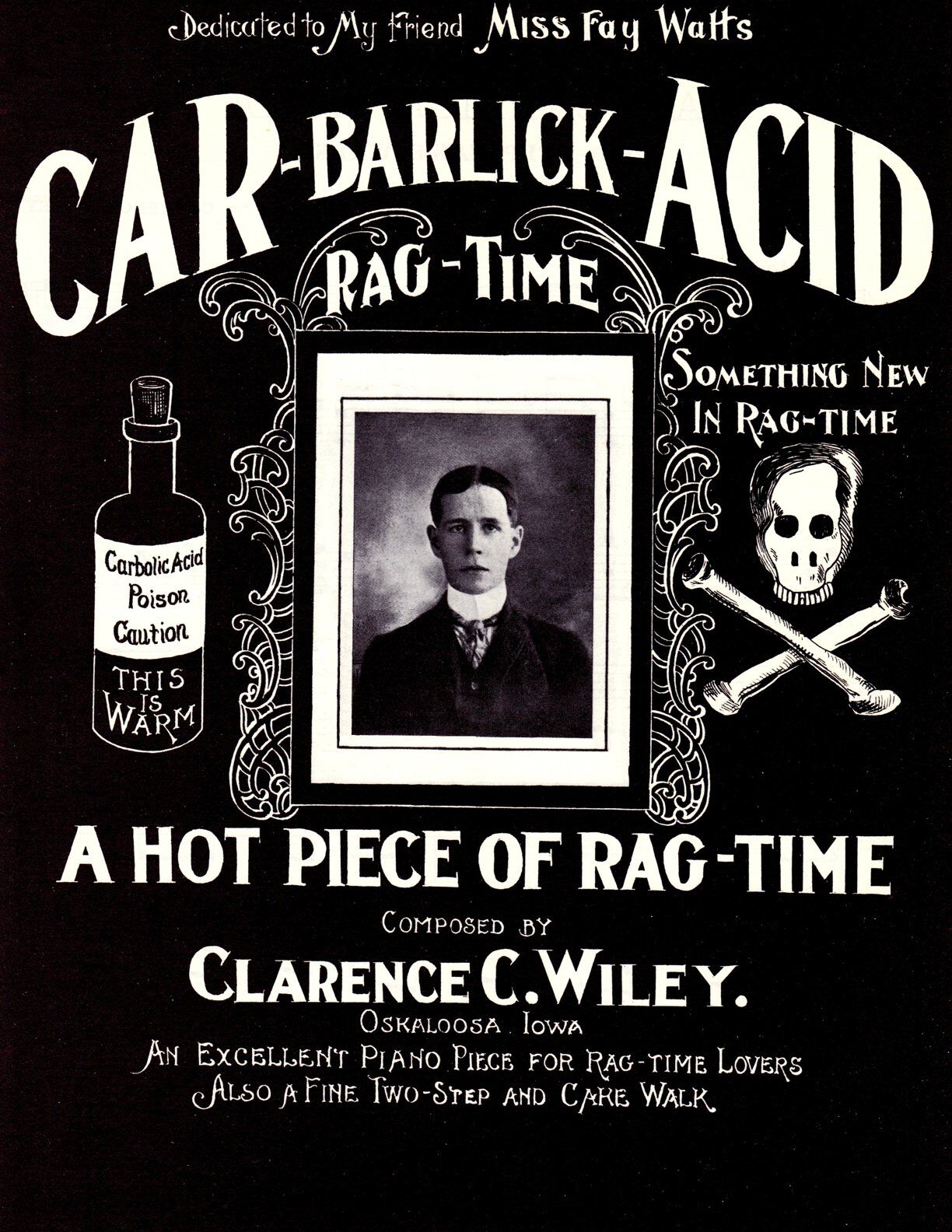 Clarence Wiley, the composer of “Car-Barlick Acid” died in this way. He was only 24 when he died from a morphine overdose while performing in Chicago. Even the standard fashion plate of this style, George Walker, died tragically young. There didn’t seem to be a more perfect man for this style than him, and media of the time knew it, plastering photos of his costumes all over major magazines and papers.

Clearly, this lifestyle knew no sexual orientation and race, as folks of all types created an identity around this rambunctious new type of music. The stories are tragic yet intriguing, but somehow continue to be overlooked by other styles of music.

Despite the ragtime era usually being said to have lasted through the 1910s, the ragtime style of that decade was very different than that of two decades before. A slightly more refined and plain look took over the flamboyant original styles. With all this in mind, it shouldn’t come as a surprise that the famous songs such as “Frankie and Johnny” and “Joe Turner Blues” originated in this crucial time period. It brought people of all backgrounds together in unexpected ways, as music tends to do.