In the late 1880s Thomas Edison perfected his phonograph, and set up the Edison phonograph works in Orange, New Jersey, and at the same time Edward Easton began the Columbia phonograph company. With the same technology now being used by two competing companies, Edison famously called Easton and his company “pirates.”

Though Columbia was the original band of phonograph pirates, another company took this idea and ran with it. This company was that of Zon-O-Phone, or The Universal Talking Machine Company (UTMC). Zon-O-Phone was the most remarkable record company to arise at the end of the 19th century, beginning as a blatant piracy scheme, and becoming the first company to prioritize musicality over technology. With this unusual outlook, it led to some very dysfunctional leadership. All the other record companies looked upon Zon-O-Phone with disdain, and were at times afraid. Although the company was independent only from 1900 to 1904, the scandals that brought them down are surprisingly numerous. Fred Hager may have just been their music director, but he was really what kept the fabric of the company together, and was in a way their professional and charismatic mascot.

In 1899, Zon-O-Phone started solely as a seller of a new type of gramophone, improving on Berliner’s. Much like Columbia had done around this time, they moved their base of operations to the heart of Wall Street. It can be suspected that some of that Wall Street money helped Zon-O-Phone get started. For the first year of its existence, the company sold mostly their unique disc machines, but had to make some extra cash by including records. They originally had no original talent, so they simply used discs from Berliner. The very first Zon-O-Phone records were pirated Berliners, with the original writing on the labels buffed out by hand and typed in a different font. Coming from someone who has seen a few of these records, they weren’t convincing then as they are now—they were obviously Berliners. 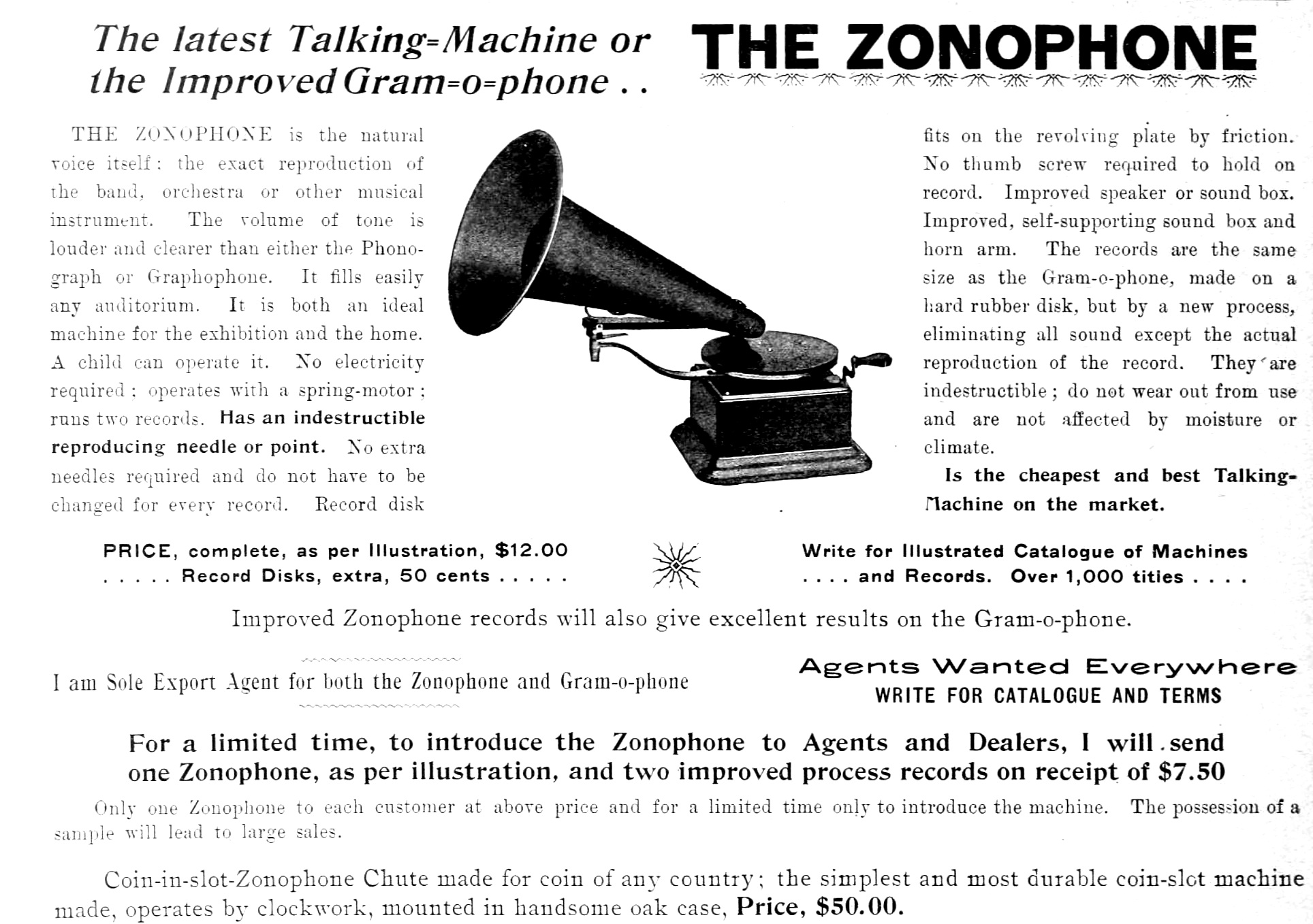 By the end of 1899, Frank Seaman, the original inventor of the Zon-O-Phone machine, and his cronies decided that pirating other disc records was too inconvenient and scandalous. So out of necessity, and to legitimize their company, they set out all over New York for young and willing musicians. They eventually settled on Fred W. Hager, who was at the time the youngest bandleader in the region. Hager had some previous experience with the phonograph, working for two different cylinder companies since the middle of 1898. Hager was at this time conducting his band at the small but popular St. Mary’s Park in the Bronx, and had become a local celebrity of sorts in the Morrisania neighborhood.

After they gladly took on Hager, they sent him out into every neighborhood in New York to find talent. He had his own band of course, but he had to pick up singers, musicians, and studio workers. It took until the early spring of 1900 for Hager to have organized an entire staff of talent to begin the recording process. Hager himself wrote in detail of finding such talent, like Justin Ring. And Ring later spoke of when he and Hager first met at an old German casino in the Bronx which has since been destroyed.

Frank Crandall, the executive secretary of the company from the beginning, spoke in detail of how they began making records and expanding:

The business of the above companies has been to manufacture and sell disc talking machines and disc records. Said business was begun by the Universal Talking Machine Company in May, 1900, and has been carried on continuously ever since, In carrying on such business, the Universal Talking Machine Company invested in a factory and extensive plant consisting of special tools, moulds, presses and machinery, which factory and plant has been developed and enlarged from time to time, and added to, so that the same now represents an expenditure of between $200,000 and $300,000.

This quote was taken directly from Crandall’s testimony in the suit between the UTMC and Victor Herbert in 1904. This trial, which is a spectacular exhibition of music world gossip, also gives a rare and unique look into how this company operated before Victor bought them. By 1904, the company was in shambles, very tired of the dozens of lawsuits they had endured from other companies.

As mentioned before, Zon-O-Phone was a company of criminals to all the other record makers at the time. While their air or superiority did earn them respect and genuine rivalry from companies like Columbia, they couldn’t escape the waves of lawsuits. Between 1900 and 1904, there were at least nine different lawsuits that Crandall, Seaman, and their other executive Orville LaDow had to handle. The most major of them being the infamous Victor, Climax, Zon-O-Phone battle in 1902 that nearly threw Columbia and Zon-O-phone out of business. It seemed that the money, and their charm, was able to get them out of any serious penalties, at least enough to put them out of business. But with all this money, there soon came abuse of it. 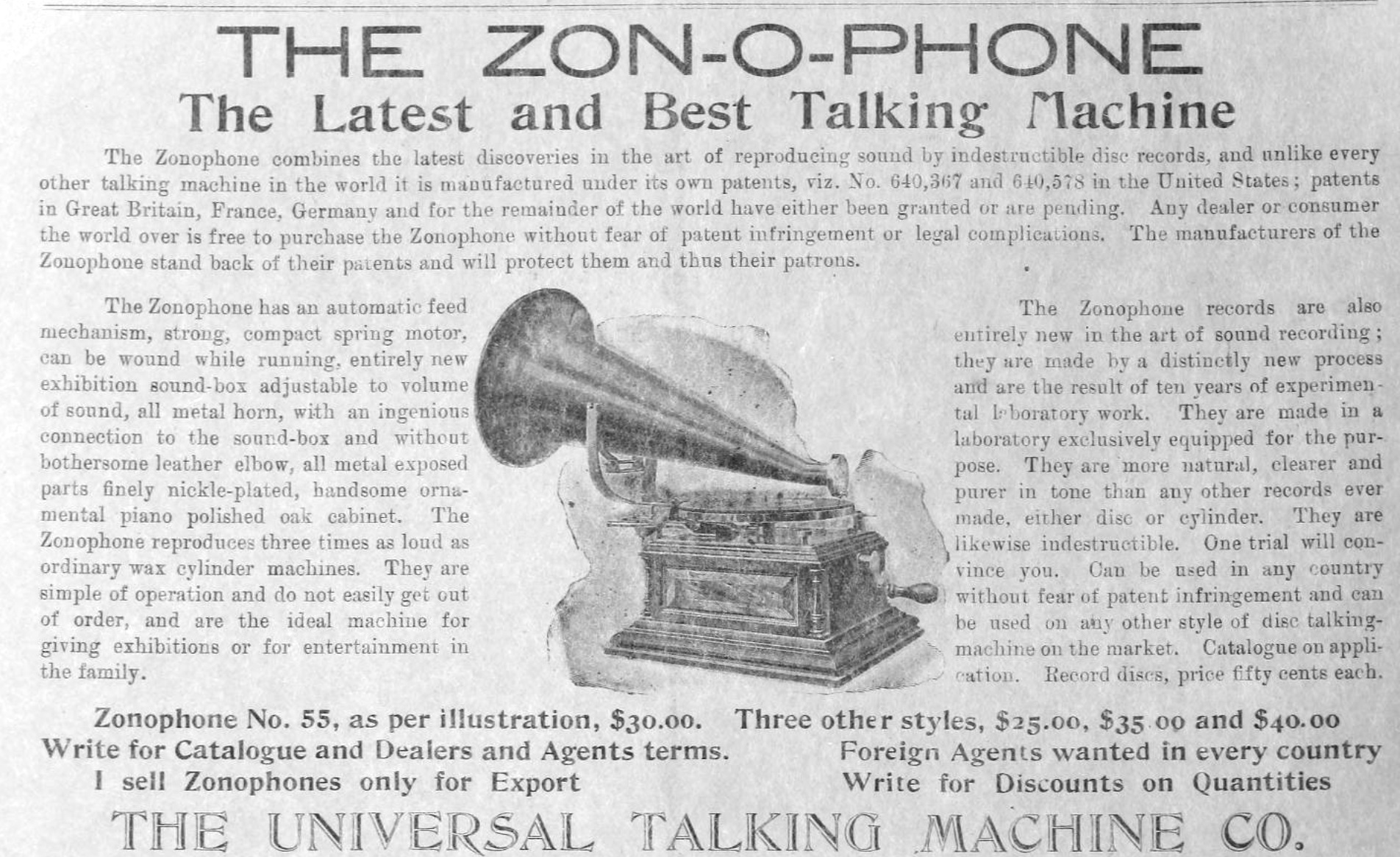 It is likely that as the years went on, and Hager was able to keep everything running better than expected, Seaman and LaDow were embezzling money (as the record of their income is all over the place and doesn’t always match the company assets). With all the higher management being concerned more with their minute technology and improvements to Berliner’s gramophone, Hager was tasked with more than he was likely sold when the bill of goods was given to him. In addition to picking up talent, making his own violin records and leading his own band, he also had to take on the role of quality control before the records were sent to be pressed, and he hand-etched the titles and performers on every label. At every other company these tasks were all done by different people. Hager stated in the same court case as the aforementioned one:

Soon Hager tired of the amount of work for little payoff he was receiving. At times, it seemed as though Hager was keeping the company from falling apart. All of this started to change in 1903 however, when Victor was taking more of an interest in buying out the outlaw label. Although Eldridge Johnson had always had very nasty words about Zon-O-Phone, he figured it would be best for his management to take them over slowly. Hager was perfectly content with this, finding other more profitable ventures elsewhere. As the company was bought out, all of the management and talent were scattered throughout the record world, never really disappearing.

The reason I stopped this story at when Zon-O-Phone was bought by Victor in 1904 is because they truly were never the same after. While Hager and his band continued to work for them, the overall sound and enthusiasm that built up the company in the first place had largely dissipated by 1905. The company continued to exist until 1912, but it moved to a location closer to Victor’s and toward the very end, in the exact same recording lab as Victor’s. The renegade influence of this label is undoubtedly important, regardless of the amount of criticism it received in its own time.