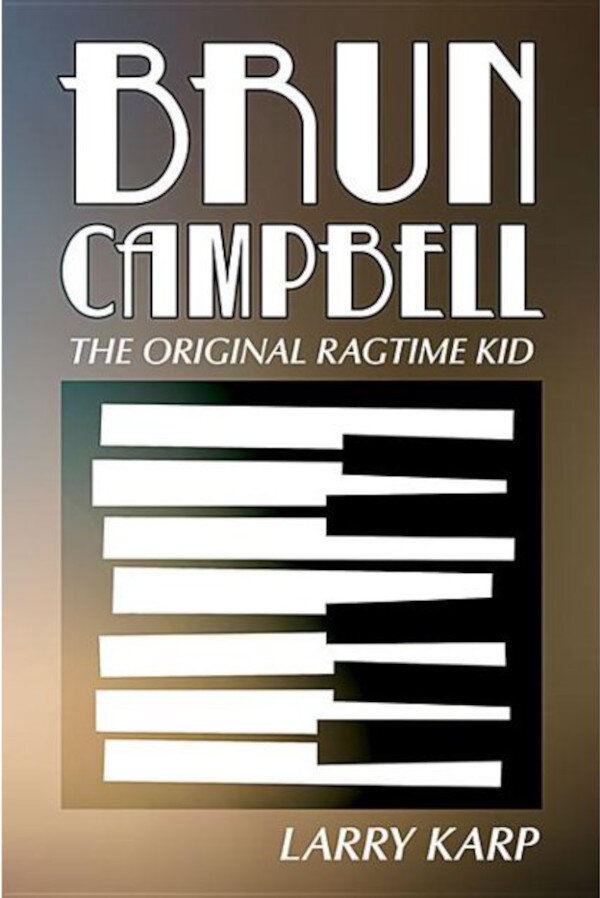 Looking back on the 2016 Scott Joplin International Ragtime Festival with all its usual joy and frivolity, I am reminded more and more of the heritage of this festive occasion. Specifically, Brun Campbell is on my mind right now as I consider Larry Karp’s long-awaited biography of “The Ragtime Kid”.

The late Dr. Karp investigated Brun Campbell’s life for several years, having included this hero in two earlier ragtime oriented mysteries. As a result of those novels, the author received a collection of Campbell ephemera and this has become one of the great stories of modern ragtime lore.

The vast accumulation of the Campbell’s manuscripts were carefully studied and extensively additional researched. In the last years of his life Larry Karp produced a very important biography of this intrepid promoter of all things Joplin and the place where it all began, and that would be of course, by Campbell’s calculation, our own Sedalia.

Though sometimes I know Campbell’s hyperbole outraces his facts, his is still one of the few “ear and eye witness” accounts of Sedalia in the Ragtime Era.

In his introduction Larry Karp refers to the fact that this is a storyteller telling a storyteller’s story which I find to be an apt way of describing the endeavor though it diminishes the superlative background research that went into this volume.

The first inclusion in the book is Campbell’s own narrative titled “When Ragtime Was Young” with the biographer’s exceedingly well researched commentary. This narrative covers the vagabond’s early life through the “end” of his ragtime performance years in about 1908. Dr. Karp’s editing is very informative and reveals Campbell’s difficulty with accuracy.

The second chapter covers the rest of Campbell’s life as pieced together from the daughter’s accumulated documents. The author quite adequately fills the narrative gap in Campbell’s writing between 1908 and the 1940’s when Brunson became all-consumed with promoting ragtime. Campbell had taken up barbering in Venice CA as a livelihood in this period.

The author even goes so far as to offer up a photo of a finer quality Barber Half Dollar to compare with the one Joplin gave to Campbell that was used for target practice, spent and then it found its way back to the “Kid”.

My most eagerly anticipated section of the book came on page 71 when the naming of “Maple Leaf Rag” is discussed. However, Dr. Karp is only able to reiterate the existing theories including Campbell’s famous contention that the rag was named for Florence Johnson’s “Maple Leaf Waltz” published by the Perry Music Company in 1897 and not for the club.

The section on Campbell’s association with Lottie Joplin is also intriguing with copies of the correspondence available to him. Unfortunately Mrs. Joplin’s veracity is often as questionable as Campbell’s. Brun’s famous effort to construct a magnificent monument over Joplin’s grave is nicely detailed but the plan was as extravagant as his comment that carriages with letters spelling out MAPLE LEAF RAG followed the coffin to the cemetery.

I quickly read the account of the Campbell and W.C. Handy encounters to get to the Sedalia aspect of Brun’s memorialization campaign. The article with Roy Carew in The Record Changer (1945) about Sedalia as “The Cradle of Ragtime” titled the city’s role and began the interest that culminated in the Festivals.

The June 29, 1947 Sedalia Democrat article “Did You Know Ragtime Music Was Born in Sedalia?” contained lengthy information provided by Campbell supposedly relating Joplin’s story, including the element about Flossie Johnson’s waltz sourcing the name. Further it says the Maple Leaf Club was named after the Rag.

Campbell’s pestering did lead to the Abe Rosenthal’s Sedalia Men’s Choral Club Memorial Concert in Sedalia in April 17, 1951 and the plaque the group placed in Hubbard High School commemorating Joplin.

This second chapter details Campbell’s efforts to memorialize Joplin with the aforementioned grave monument, his attempt to record his and Joplin’s rags (especially the “Maple Leaf Rag” as he claimed Joplin had taught him to play it), and his effort to tell his story promoting the legacy of ragtime, Scott Joplin and Sedalia. Brunson Campbell died November 23, 1952.

Larry Karp finishes out his fine volume with other short writings of Campbell including a piece on Otis Saunders from the 1940’s stating that Saunders had indeed helped arrange the “Maple Leaf Rag” especially the last half of the trio but that Saunders did not deserve credit as co-composer. Marie Walker in Hannibal MO is also credited with assisting with the final composition.

In these final writings, Campbell was fond of referring to the Sedalia style of ragtime in which Joplin composed and played.

A marvelous Richard Egan essay is included “recalibrating” Campbell’s work and contains Egan’s statement, “I recognize my innate captivation with the rawness, the ruggedness, the powerful force that his (Campbell) music connotes.” And finally Campbell’s own music is detailed in a thorough appendix. David Reffkin served as a music and history consultant and his own CD Essays in Ragtime with the American Ragtime Ensemble was issued by Rivermont to be a sort of companion to the book.

Now, why you ask have I thrust this fine book on you in my emeritus status as a cheerleader for the Scott Joplin Festival? Simply because like Thomas Cahill’s story of how the Irish saved civilization during the Dark Ages, Brun Campbell, through ragtime’s “lean” years, continued passionately promoting Joplin as the “King of Ragtime” and (here it is) Sedalia as the place where it all began.