Charlie Bertini Creates ‘All Warmed Up’ Gear for Idle Trumpeters

With public gatherings (including concerts and festivals) banned due to the COVID-19 pandemic, live music has faded into a mere memory. Orlando, Florida, jazzman Charlie Bertini decided to make lemonade out of this lemon.  The well-traveled brassman and founder of AppleJazz Records has designed and is marketing a T-shirt for trumpeters which reads, “All Warmed Up and No Place to Go.”

“The trumpet image is from my business card and stationery which I’ve had for over 30 years,” he said. Although the sentiment seems especially appropriate right now, Bertini admits that the “All Warmed Up” shirts pre-date the pandemic.

“The idea came up in a casual conversation about six months ago, so I had a few tees printed for fun,” he said, “and plenty of trumpet players asked to buy one. Even before the quarantine, we don’t always work that much!” 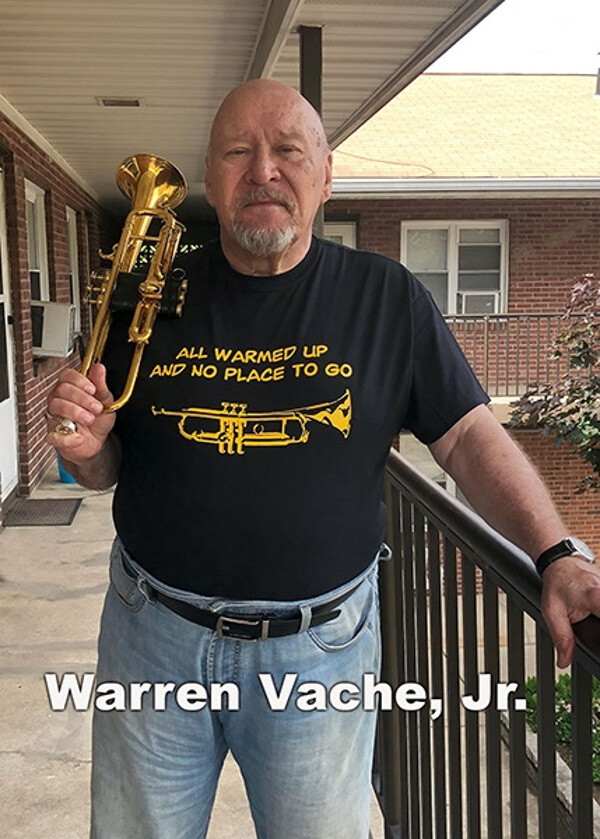 Once the health crisis hit, Bertini had more shirts manufactured and started a marketing campaign on social media and email. The shirts—which come in medium, large, extra-large, and extra-extra-large sizes—cost $15 each, plus shipping. “Sales have been good, and I still sell some each week, sometimes in waves, as trumpeters like promoting them on their own social media,” he said.

Among the horn players who proudly don the trumpet T is Warren Vaché Jr., the New Jersey-born swing and Dixieland revivalist who Bertini considers “perhaps the best living jazz trumpeter.”

Others who’ve jumped on the T-shirt bandwagon are Wayne Bergeron, a sought-after Hollywood trumpeter who performs in Gordon Goodwin’s Big Phat Band and Broadway brassman Frank Greene, a veteran of Paul Shaffer’s World’s Most Dangerous Band on NBC-TV’s Late Night with David Letterman.

“Some very accomplished trumpeters have purchased the shirt,” Bertini explained. “So I always ask for permission to post their photos, and everyone agrees. It really is just for fun but to actually make a profit is an added bonus.”

Many musicians who play other instruments besides trumpet have asked Bertini for shirts with their instrument on it. “A good idea on paper,” he said, “but that would be a printing and marketing nightmare. So, no, just trumpet for now.