Jazz is pretty powerful stuff: it can move us to tears, or it can move us to dance all night long. But can it help bring clean water to thirsty people in remote places? Modern polymath Dr. Corina Kwami thinks so—and she’s on a one-woman musical mission to prove it.

Born in New Jersey—of mixed Ghanaian, Italian, and Irish heritage—she has lived and worked in ten countries to date. Worked as what? Well, as a policy advisor (at the Royal Academy of Engineering), a lecturer (at University College London), a tour-guiding historian (in Berlin), and a tap-dancing jazz singer. The last of these is almost certainly of most interest to you, reader but trust me—the others are relevant. Corina has been called a Renaissance woman; a description usually apt to raise a skeptical eyebrow, but in her case it seems totally reasonable.

Onstage she fronts Corina Kwami and the Swing Selection, a popular London-based combo playing dance-friendly jazz classics from all over the world. Her catholic tastes stem from both her early and adult experiences. “I was surrounded by a lot of cultural, musical, and professional influences from a young age,” said Corina. “My dad was an engineer and my mum was a nurse, while my grandfather was an accountant and a musician—I find it funny that I’m juggling professions like he did, but sixty years later.” 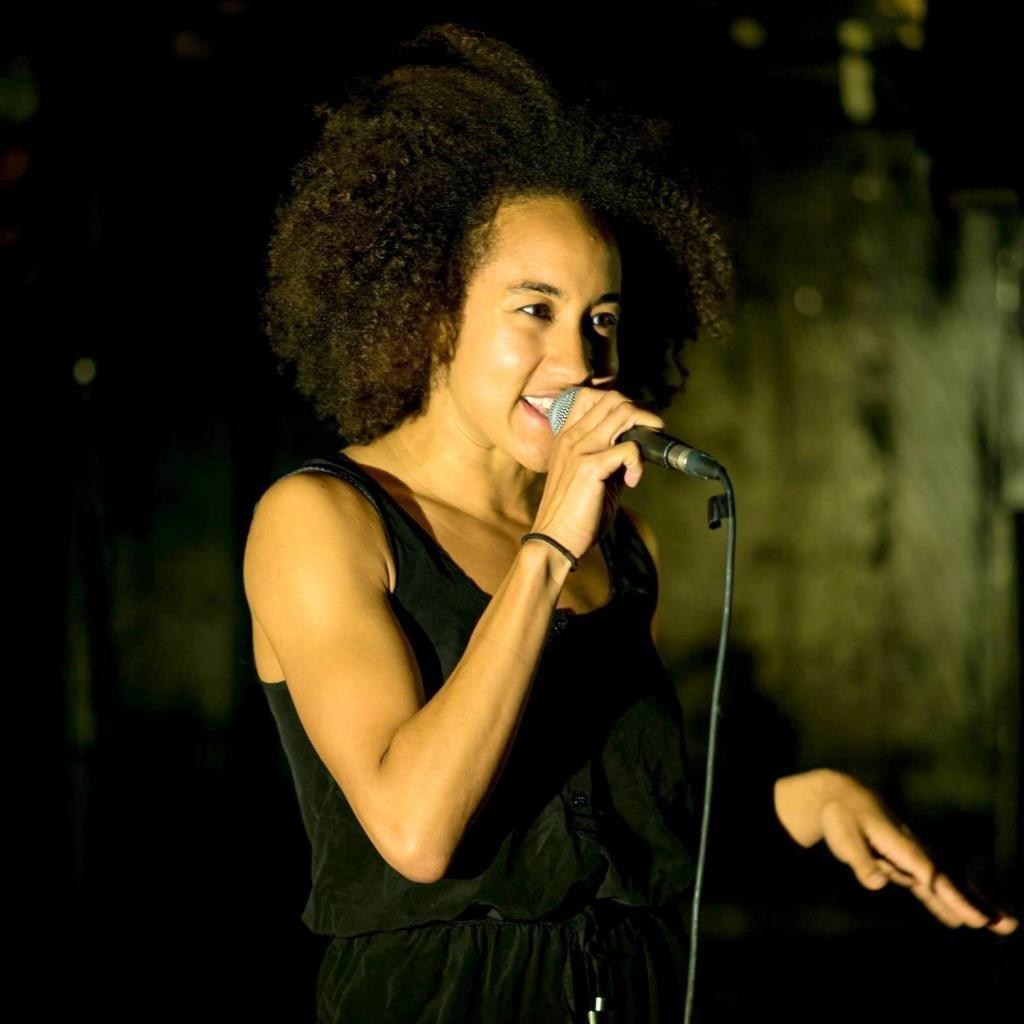 Her Ghanaian granddad was a pianist who would entertain at the “raucous” family gatherings hosted by her mother’s large, Irish clan. Corina had little time for her elders’ musical choices—but they were there, infusing into her teenage brain. “My dad was obsessed with jazz and funk,” she said. “We also listened to a lot of highlife, which is like Ghanaian big band music but with African percussion and melodies; we often had parties and that music was always on.” At Christmas, the family would play musical chairs to grandad’s stride piano. “I wasn’t really into it,” Corina admits. “I was listening to Backstreet Boys and other terrible boy bands then.”

She took piano lessons from age eight, but focused on classical; it wasn’t until high school that jazz first piqued her interest. “I had an amazing teacher and he was always playing jazz in his US history class,” she said. “I was fascinated by its origins and its place in our history. But it wasn’t until I moved overseas [to study and later for work] that I started listening to more jazz. Everywhere I went, I found jazz musicians.”

In Switzerland it was gypsy jazz that caught Corina’s ears; in Germany, 1930s cabaret classics. By her stint in Berlin, she had absorbed enough to develop a two-and-a-half-hour walking tour of local jazz clubs. “We booked on a walking tour in Leipzig and the guide didn’t show up. My friend gave me the guidebook and said, ‘You should do it.’ And so I was just walking around riffing and my friend said, ‘You should do this in Berlin, because there are dancers and musicians visiting from all over the world.’ So I gave it a shot.”

At each tour stop, Corina would sing to her clients. In London, she distilled this tour into a very musical TEDx Talk (at Goodenough College) and a ninety-minute West End cabaret show. By now, Corina’s broad interests in music (which she studied at London’s Richmond Jazz School), history, science, and policy were coalescing into big ideas about how jazz might have the power to quench the thirsty—and more besides. “I started working in water policy, so I went to a lot of places where access isn’t good but innovation is great,” she said. “My experience is that it is politics and bureaucracy, not technology, which stops things from moving forward.”

What was needed, Corina realized, was something to bring diverse stakeholders together and get them talking the same language. And music—especially jazz, with its diverse influences and global reach—seemed like the ideal candidate. “When there are so many disciplines and perspectives to consider, it’s difficult getting people to talk in a productive way,” she explained. “But music is a common ground; even if people can’t agree, they’re happy to share their opinions and it’s easy enough to find similarities. Using music is employing something that everyone can relate to.”

Jazz is popular amongst scientists and other big thinkers, she added—like those trying to build national water networks. “These are very complex systems, in which something that works today won’t necessarily work tomorrow,” said Corina. “In some ways it’s similar to how a jazz piece has a lot going on, and the challenge is how you move through this song—which is like trying to get water from A to B, with lots of things which might stop it.”

Her solution is a seminar, currently in development, employing jazz techniques to get around roadblocks in civic projects. “I want to find out what practical things we can take from music and apply to other disciplines,” said Corina, “because in the end, both jazz and science are all about collaboration.”

Coupled with its innovative, improvisational nature, jazz can inspire scientists and politicians to get on the same page and think outside the box, Corina claims. “As a musician, I’m constantly coming across new material and figuring out how best to communicate it,” she said, “so I know there’s a lot we can learn about communication from the arts.”

Last year she test drove the idea with a presentation on jazz for innovators. “I used [bebop drumming pioneer] Art Blakey and Sidney Bechet as examples,” she said. “I think their success can also teach us a lot about the importance of flexibility and creativity, in all sorts of contexts.”

Corina hopes jazz can also help to heal social wounds, including tensions in both the swing dance community and the wider world; just as Black Lives Matter has forced conversation about racism, dancers are debating the inclusiveness (or not) of a pastime which glorifies a time when its originators were second-class citizens.

“As the daughter of immigrants, I see jazz as the story of people moving around the planet,” she said. “I mean it’s really taken off in Asia—I think the fact that it’s now bigger there than anywhere else in the world is just amazing. This American art-form is African music played on European instruments. It’s an interesting history to reflect on and ask, where does your story really begin?”

In terms of making progress—in the overwhelmingly white swing community, at least—Corina has more innovative ideas. “I do think we have to reflect on how the scene is so disconnected from its own history,” she said. “We’re being nostalgic about the time that people like me were second class citizens, or even property. Too many [white] people are saying, ‘But that [oppression] is not my history.’ What do you mean, it’s not your history? We’re all connected.”

But where some see education as the only solution, Corina sees “empathy, kindness, and friendship” as equally important. “I do have empathy for people who are confronting these issues for the first time—as well as those who face them every day, she said. “So I don’t think it should just be about history lectures at dance camps and things like that; it’s not about pointing fingers and seeing who is doing the best job. You need to foster love and respect—people who love you will do anything for you.”

Swing dancers could teach the world a thing or two about mutual respect, Corina added. “I’ve made some of my best friends dancing—if your best friend explains something to you, you’re much more likely to take it onboard,” she said. “Dancers quickly took to the #MeToo movement and were happy to create safe spaces for women, because over half of the dancers in the room are women. So dancing is a great space to have these conversations and I’m optimistic that things will change for the better.”