Fred Hager and the Birth of Country Music 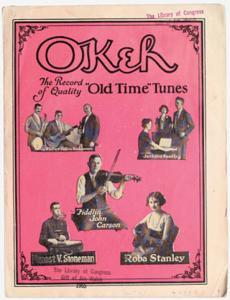 The recent release of Ken Burns’ multi-part documentary Country Music has sparked much conversation in the music history community. Just a few months before this series premiered, something else resurfaced that could be cause for some re-writing of the very complicated history of the first country music to be captured by record companies.

In 1924, the Okeh phonograph company sent out a small crew of engineers and talent scouts throughout the Southern states as well as into the Appalachian region. This group of field recordings were the first of their kind, and sparked a new market and craze in American music. Soon all the other record companies were anxious to send out their best recording folks to capture these seemingly new sounds, which was soon given the name of hillbilly music.

In each history of this revolutionary group of recordings, the sole credit is generally given to Ralph Peer, who was said to have been the driving force for making these recordings. Peer was undoubtedly the most prominent figure in recording these itinerant performers, but another Okeh executive stated otherwise.

About eighteen years after the first group of Okeh field recordings, Fred Hager typed out a dramatic play of sorts that allowed him, with the help of his long-time partner Justin Ring, to tell the story of the beginning of the hillbilly craze. Hager had been a prominent lyricist since 1902, and therefore wrote poetically as he told this story. Hager claimed that the 1924 Okeh record of “Wreck of the Old 97” was what began the hillbilly craze, and claimed sole ownership for the famous field recordings that followed. In his typewritten notes he claimed thus:

A few weeks after “Wreck” was recorded on Okeh records, Fred Hager, then the recording manager took his recording crew to the South, where he recorded many hillbilly troups, bands of fiddlers, singers from the mountains and hills, and in a very short time had a catalog of over 100 hillbilly records which were immediately acclaimed by the entire southern population.

These records were sold in furniture stores, grocery stores, cigar stores, etc. A thing never heard of before, this also created a demand for thousands of machines. Due to the exploitation of this one song, hundreds of songs followed, such as Cave Songs, Virginia Mountain trail songs, and many hillbilly singers have since become famous. These songs helped to bring about a better understanding and friendship between people of the North and South…

In Hager’s papers regarding these field recordings, Ralph Peer is nowhere to be found, neither are other important studio figures Hager was associated with. Here is where the story gets fuzzy. When reading over Hager’s writing, it can seem like the whole field recording thing was his own idea, and all the others were minor characters in the story.

When you look up these Okeh field recordings, Peer and Charles Hibbard (another recorder who had experience that went back in studios) are always given the sole credit to the important work that went into these recordings. Hager is nowhere to be mentioned in any telling of this story, and in only two period sources does Hager get mentioned. Hager is mentioned in more than one source in recording media regarding the Okeh trip to Chicago in 1924-25, but on the Virginia recordings is nowhere to be seen.

Here raises the question of what Hager’s intentions were. When going over Hager’s writings to researcher Jim Walsh (written within a few years of Hager’s typewritten notes), Hager was anxious to get his legacy known. In the decades after Hager died, Walsh had all of this information Hager gave him, but as Walsh kept sorting through it, he was learning that a lot of it was mixed up and some of it wrong. So, regarding the hillbilly recordings, was Hager right? This could lead one to wonder what Hager’s relationship with Ralph Peer was. Maybe the two were enemies in the Okeh studio.

Peer was a later addition to the Okeh crew, joining around 1921, three years after they were founded by Otto Heinemann. Most of the management at the company from the very beginning were middle aged, and all had been in the recording business for at least a decade.

Peer was born in 1892, making him nearly twenty years younger than his superiors. He was one of the youngest prominent members of the already progressive recording company, but his burning ambition to tap into new record markets proved the best way to sway the old guard.

This ambition may have also been a barrier to someone like Hager, who was the music director/studio manager. By 1922, Hager’s infamous burning ambition had faded, but by this time he was the executive that everyone had to deal with, and proved he was stubborn as could be. Peer had to get Hager to move on his old ways, as Hager was the executive who broke into the race record market with the approval of Mamie Smith’s “Crazy Blues” in 1920, and as we’ve seen he was eventually able to do so.

This still does not answer the question of why Hager did not mention Peer, and why in every piece on this subject Hager is not mentioned. The disagreements and generation gap may have been only a part of why these two things do not corroborate. Perhaps Hager’s role in the creation of the hillbilly record is insignificant, though this can create some confusion when sorting through his personal papers. This begs the question, in Peer’s papers, would there be a similar story to analyze?

Comparing Hager’s papers to his writings to Walsh proves his somewhat rosy view of the history he was part of, and all of his flowery writing about these hillbilly recordings could just be a product of this. It is difficult to tell whether this is true, as Hager was mentioned in period sources on the subject, but in keeping with the modern scholars, Peer was mentioned most often regarding this subject.

This unusual confusion of important history does not make a significant difference in the long run, but it could add several layers to the story of recorded country music. This story is an open ended question, and makes the often straightforward history of hillbilly music seem fuzzier. We may never know the answers to these questions, but time will tell.