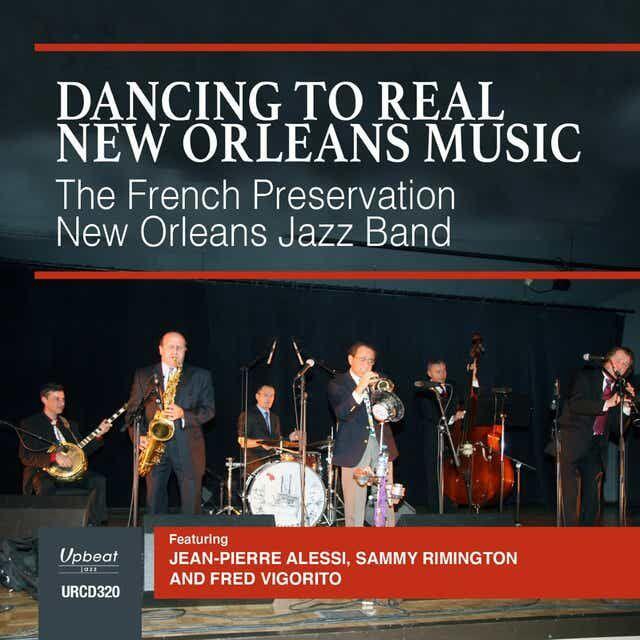 During the more than seven decades since the beginning of the Traditional Jazz Revival in the 1940s, Europe has been producing some first-rate traditional jazz bands. The French Preservation New Orleans Jazz Band has been one of these, and this recording of a concert at one of their favorite locations in Irigny, France, features two guests—Sammy Rimington from England on clarinet and alto sax and Fred Vigorito from the US on cornet, both having frequently appeared on other recordings by the band; so all are familiar with each other musically.

The tune list comprises several genres, just as one would have found with the bands playing New Orleans dance halls, and most of the tunes will be familiar to dancers of today. While the title “Calcutta” may not resonate immediately, once the track starts it should ring a bell. All the others will probably be immediately recognized.

Each tune is given a thorough workout, there being no three-minute limit as in the days of the 78. So we find the briefest time, 4 mins. 45 secs., being allotted to “Burgundy Street Blues” and the longest, 8 mins. 50 secs., being given to “Just a Closer Walk with Thee.” All the others fall somewhere in between these. With no time pressure, the musicians can explore in a laid-back fashion, and this they do, so that each tune opens up as they work their magic. Contrary to what we might expect, there is not as much ensemble playing as is often the case with New Orleans style playing, but what each musician finds in his solo is so captivating that one tends not to be aware of this de-emphasis on ensemble work.

Each of the musicians has his moment(s) in the spotlight except one, Vincent Hurel on drums. He stays fairly unobtrusive, but some pressed rolls are detectable on some tunes and judiciously placed accents on others, such as “Am I Blue” and “Victory Walk.” If Hurel has cymbals in his drum set, he must touch them lightly indeed.

The others in the back line do make their presence known. Dominic Molton is not a loud bass player by any means, and although he is given the occasional solo, unfortunately he is not well miked, as is so often the case with the bass on live recordings. So we have to strain a little to hear him, for instance on “Rum and Coca Cola.”

The other member of the rhythm section, Henry Lemaire on banjo, has the onus of supplying the necessary chords in tandem with the bass since there is no piano to furnish them. This he has no problem doing, and he provides some nice strumming, as well as single string and tremolo work along the way, as he does in his solo on “Rum and Coca Cola”—the chording with intermittent tremolos keeping things interesting—and also on the bridge and on the out chorus of “Pretend,” where he displays some fine single string and tremolo work. Lemaire, Molton, and Hurel form a formidable back line that is almost metronomic in its control of tempos.

The front liners, who have often worked together on other occasions, surf well here on the wave the back line provides. J-P Alessi, the leader, with his tenor sax substitutes for the usual trombone in New Orleans front lines. His sax-playing history is not a long one, but he manages quite ably to handle the role of filling the spaces provided by the others for the low tones.

His cohorts, both well known in the traditional jazz world, present some wonderful contrapuntal jazz. Sammy Rimington is all over the clarinet, showing his command of the low, chalumeau register as well as the upper one, executing flawless runs and arpeggios. His feature, “Burgundy Street Blues,” which he carries solo with rhythm backup, is ample evidence (if any were needed) of his virtuosity.

Fred Vigorito, a disciple of Kid Thomas Valentine, laces his playing with flares and growls, à la Valentine, as well as his subtle use of cup and derby mutes. These enhance his development of theme while improvising.

“Rum and Coca Cola” nicely demonstrates the cohesion of the group. A moderate tempo established, the ensemble, led by cornet, takes it the first couple of times through. The clarinet then takes a solo chorus, starting in the chalumeau register and then moving up, staying in the upper register for another chorus and executing some great runs. The tenor sax follows, once through on the melody, then on improvisation for a chorus. A banjo solo follows, chording with intermittent tremolos, which variety keeps things interesting. Next up is the bass solo—just a little under-recorded—stating the melody again. Once again the ensemble comes in to take the tune out after a few choruses, which include some very nice improvising in the upper register by the cornet in the penultimate chorus.

Jelly Roll Morton stipulated the melody should always be present, and the band here adheres to that tenet, one of the front line invariably carrying the melody for a chorus and then handing it off to another member, the others backing with counterpoint, obbligatos, or harmony. The result is a little over an hour of very pleasurable jazz.

Upbeat CDs are available on the Upbeat web site www.upbeat.co.uk as well as on-line from sites such as Amazon and www.cduniverse.com.