From inside a Livestream with Carl Sonny Leyland

The Basin Street Regulars had finally lined up a band for its March Sunday session and it looked like it was going to be a rare treat. Carl Sonny Leyland had assembled a fine collection of blues oriented musicians and they were going to head to Pismo Beach directly after a recording session at a local studio.

We were all very excited about this band, press releases were quickly assembled and distributed.
But it was not to be. Within days, restrictions imposed by the State became tighter and tighter until the final blow- the City of Pismo Beach suspended our use of the Veteran’s Hall. The March Sunday session as planned was cancelled.

But we still wanted to do something for our members, and Dean Krikorian asked if we might be able to Livestream a performance by Sonny Leyland as a solo act. That seemed possible, so we asked him if he would be willing and able to do it. So we hatched a plan to do it at our house, which has medium quality internet, but better than Sonny’s.

With only a week to plan, Jeff Cardinal, Shonda Croly and I immediately started testing our capabilities and set up. We wanted to stream on a platform that would not require people to have any accounts or sign up for any services. We found out that if we streamed from one of our Facebook public pages, people could watch without needing to have a Facebook account.

We wanted good sound for our viewers, so Jeff set up microphones for Sonny and the piano and Shonda came over and we did some tests. We decided to do two simultaneous recordings, one with Shonda’s video camera and the ambient room audio. This would be used to upload to YouTube later. The other recording was to be made on an iPad that was hooked into the microphones. This would be used for the Livestream. Getting the PA audio into the iPad was the biggest challenge and necessitated a trip to Electronics Parts Warehouse in Santa Maria.

After many tests over a period of days, we were able to produce a livestream with very good audio and grainy video. This is due to the limitations of our internet. But we decided to go ahead with it, knowing that the cleaner video would be uploaded to YouTube later.

We invited a few locals to come over and be the audience, with the caveat that they would be seated outside and that they bring their own food and drinks. 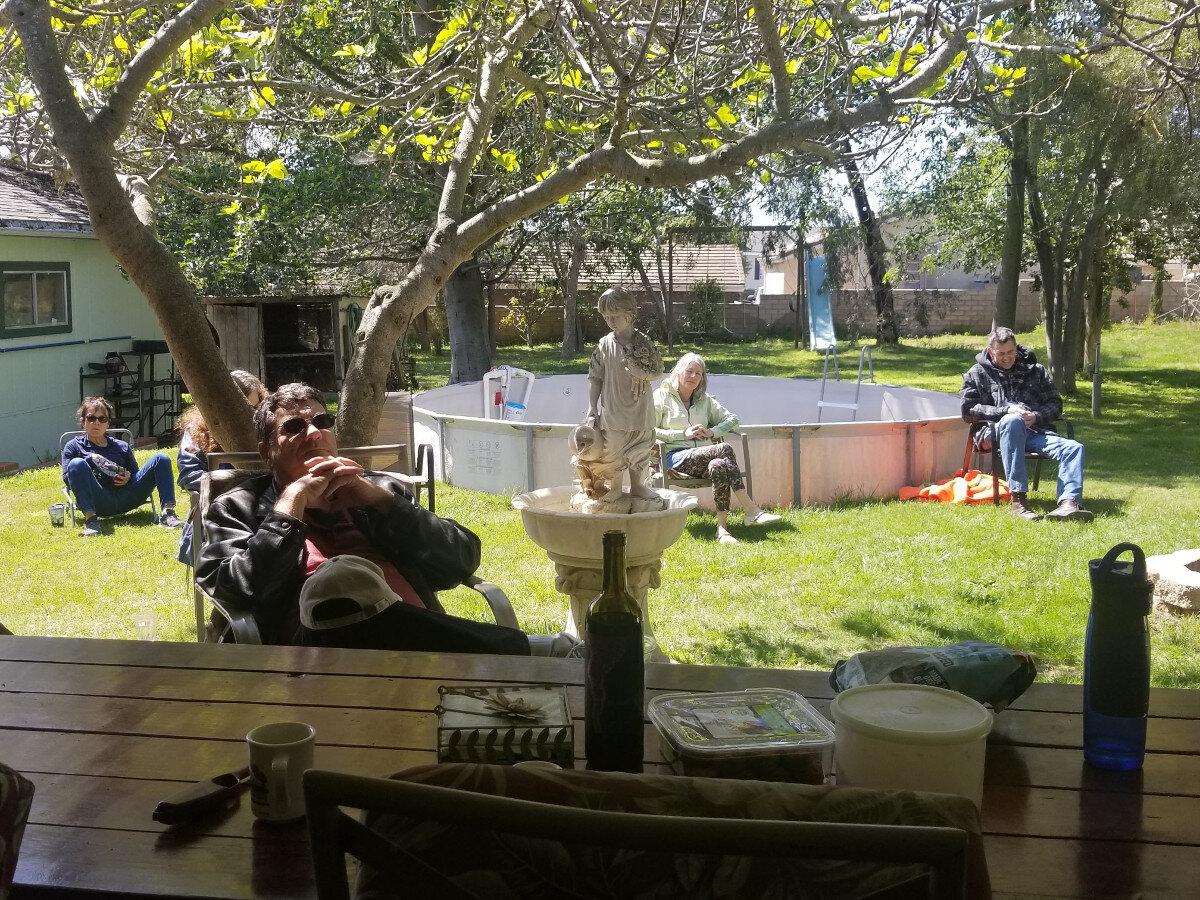 The big day arrived, and so did Sonny, decked out in his eclectic vintage apparel, complete with neckerchief. We were all nervous as to how it would go. Jeff got the audio going and Shonda manned both cameras and answered the Facebook comments from a safe distance. The back doors were opened to allow for room airflow and Jeff set up speakers to play outside for the audience, who came and arranged themselves at safe distances around the yard.

To insure that we could correct any issues that came up, we decided to do two 50- minute sets with a break in between.

Sonny sat down to play, and we went live. Once we started rolling, many people logged on- over 100 watched the Livestream event while it was in progress. The event went seamlessly, we had no major issues. Jeff adjusted the microphones a little and Shonda answered questions and comments during the show. The live audience clapped and cheered after every number, which was picked up on the recording. It gave Sonny someone to play to. 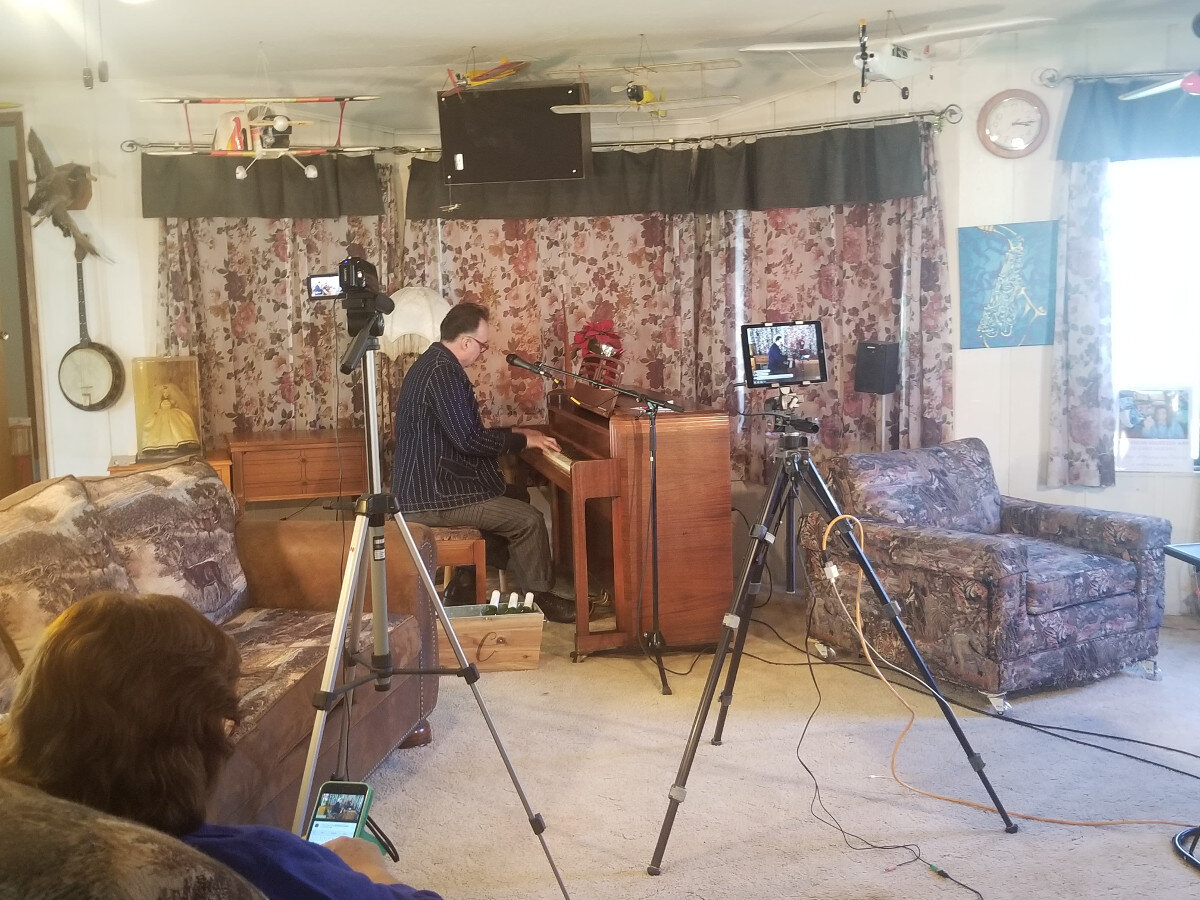 We proceeded with the second set which went as well as the first. We ended the event at about 4:00 p.m. Our audience melted away. Sonny stuck around for a while to eat his lunch and reflect on the event. We all agreed that it had been stressful at first but that it was generally successful.

Since the event, there have been 4500 views of Set 1 and 1800 views of Set 2 on Facebook. The YouTube video has had 88 views to date. Set 1 included these songs, amongst others: Careless Love, Ley of the Land Boogie (an original), Moon Mullican’s Pipeliner Blues, How Deep is the Ocean and Mr. Freddie Blues. Set included these songs, amongst others: It Don’t Mean a Thing,( if it Ain’t Got that Swing), Red Sails in the Sunset, Beale Street Blues, Old Fashioned Love and Melancholy Blues.

If you want to view these shows, here are the ways:
On the Basin Street Regulars Facebook Page. You do not need an account.

On YouTube: “Carl Sonny Leyland Live Concert” at the Basin Street Regulars Channel. Although several video segments may appear, they will automatically play as one long video.

If you wish to donate to Sonny, please e-mail us at [email protected] and we will direct you to his PayPal site.

Since we will not be back in the Vet’s Hall by the end of April, we are looking forward to doing this type of event at least one more time. The Jump Jax are on our calendar for April 26th at 2pm PST, featuring our old friend Ted Waterhouse from Viper Six. We are looking into improving the video on our livestream.