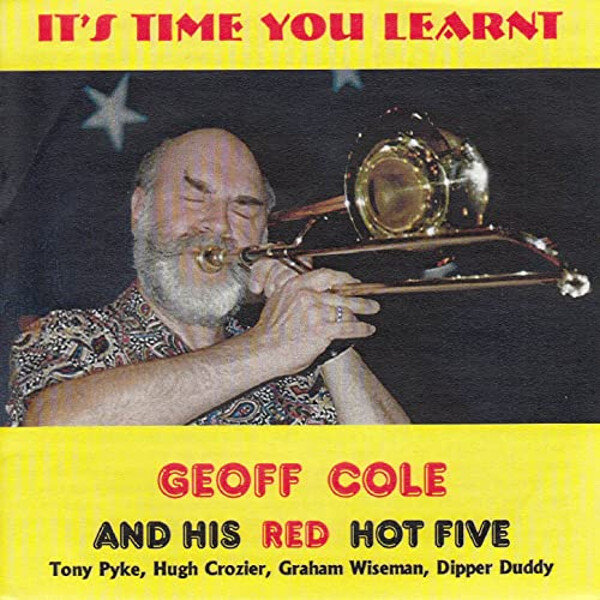 Seeing that this group is led by trombonist Geoff Cole and also has Tony Pyke on clarinet might prompt one to think of the early 1960s front line of the Ken Colyer Jazzmen, of which they were two thirds for a good number of years. However, this combo is not in that mold—at least not the “moldy fig” variety! But it gives a very enjoyable jazz treatment to the tunes in the playlist, all its members being very fine musicians, and it is good to have the CD available again.

Although there is no trumpet or cornet in the front line, such an omission is hardly noticeable as the trombone and clarinet deftly trade the lead in ensembles and along with the piano share solos. Such a configuration is not unknown in traditional jazz, of course—witness George Lewis’ Eclipse Alley Five, for example.

Other than the bass’s taking the bridge on the out-chorus of “Some Sunny Day,” and the drums’ taking tags on a couple of tunes, the bridge on “When Lights Are Low,” and a full chorus on “The Old Spinning Wheel,” bass and drums stick to the task of supporting the others without being prominent.

It is safe to say that all of the tracks swing to one degree or another. Of them all my favorite has to be “Beautiful Dreamer.” It so nicely illustrates the interplay of the two front liners, the counter melodies they each engage in, and the jumping in of the piano to relieve them of the lead, the rest of the rhythm section providing solid, tangible support all through. It is a mini masterpiece that swings gently.

Most of the tracks will be well-known to most people (other than the two tunes which are Cole compositions: “It’s Time You Learnt” and “I Can Make Believe”) although the interpretations of these may not be what one is accustomed to hearing. Thus “Ice Cream” is not the Jim Robinson version, although it does contain a nod or two in his direction by including a couple of his trombone licks. And “Far Away Blues” contains some beautiful, intricate interplay between the trombone lead and clarinet counter melody, continuing as they switch the lead.

Jazz Crusade CDs are available on the Upbeat web site www.upbeat.co.uk as well as from Amazon and streaming services.

Sheik of Araby; Beautiful Dreamer; If Dreams Come True; It’s Time You Learnt*; Until the Real Thing Comes Along‡; Ice Cream; I Can Make Believe*; I’ve Got My Love to Keep Me Warm; Love Walked In; Did You Mean It?†; Some Sunny Day; Faraway Blues; Breezin’ Along with the Breeze; When Lights Are Low; San Jacinto Stomp; Old Spinning Wheel.