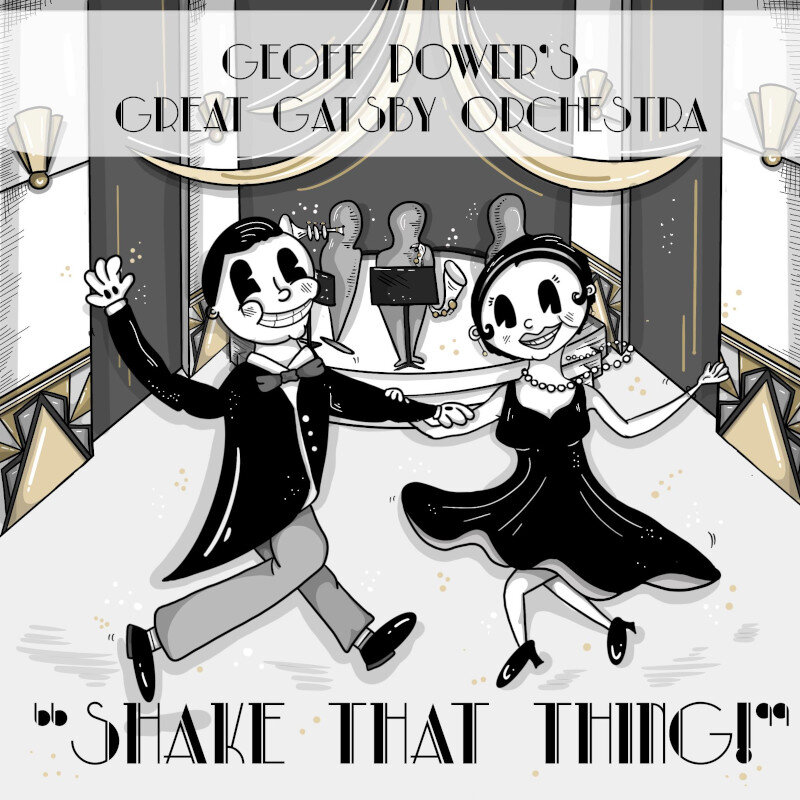 Geoff Power is well known within the Australian Traditional Jazz community. He toured the US with the New Wolverine Jazz Orchestra and appeared at the Davenport Bix fest several times. His website lists two dozen bands he has appeared with or been part of, this latest release is with a band he models on Vince Giordano’s Nighthawks, but as he noted, without a violin.

I sometimes get the impression there are as many quality jazz bands playing for 25 million Australians as there are for 330 million Americans, though those in that country are likely fearing the same demographic crisis we face in the States. Power has found his own way of combating those demographics.

His Great Gatsby Orchestra counts six of 10 members his immediate relations, including his wife and children, and at least two of the others are former students of Geoff or his wife, now in their late 20s. It is a young band, with the youngest member now his 21 year old daughter. Their previous album in 2016 probably warranted the youth band title, or at least family band, now with several members hitting their 30s they can drop all that.

The band has a bright, clean, hot dance sound, with a big entertaining groove to it, and a steady beat to get feet moving. They manage to squeeze through the pandemic with a few gigs and this disc to show for it. Their schedule is filling up now and I can sense the eager audiences in waiting, this is music that craves being live. Robbie Mann is the pianist on the album. Himself only 31, he is a rising star of the Australian traditional jazz scene and I’m only half joking when I say if past is prologue he’ll be jamming at Mona’s in New York City sooner or later. NYC has a history of “borrowing” talent from Down Under.

Among the familiar titles “Shake it and Break It,” “Black Bottom Stomp,” and “I’m Coming Virginia,” there are numbers rooted in Australia’s own jazz tradition. Tunes like “Randwick Saturday Blues” and “Wocka The Fish,” the later by Australian Jazz revivalist Frank Johnson, are likely new to most Americans, even if they occasionally found their way onto albums. These unfamiliar hot tunes are for me the highlights of the record, and Geoff Power’s eagerness to share the history of a continent where the revival thrived is to be lauded.

Vocals only feature on the occasional track but there is something very captivating about them when they appear, and it isn’t an accent, they have a natural period quality that is hard to find. The band often sounds much smaller than its many members, more intimate with arrangements that focus in on choice combinations, his years directing school bands has taught him how to properly direct a group this size. The generous release goes to 19 tracks. If your band is looking for fresh material Geoff Power has provided a whole continent to explore.