In our March issue, Dan Barrett recalled a gig with trumpeter George Orendorff and the story that George told about playing the trumpet break before the vocal on Louis Armstrong’s recording of “You’re Lucky to Me.” This month Barrett continues the story of that gig.

Later, on that same gig with George Orendorff, we were playing the final tune of the set. It was the old chestnut, “Back Home Again In Indiana.” (I regret not being able to recall the names of all the band members that night.) The clarinetist and I had already played solos, and George began to solo. The rhythm section was terrific, and included my mentor, Bill Campbell at the piano.

The frontline was seated, and I looked over and watched George as he played. I remember his excellent, effortless valve technique. He used just his fingertips on the valve caps the way you’re supposed to, instead of splaying your fingers across the valves. As his fingers danced on those valves, I heard him connecting each phrase in intriguing, correlated ways. By the end of his first chorus, he had something very interesting going on.

At the start of his second chorus, he opened up his sound, playing just a little louder; a little fuller. But something else was happening: it seemed that he was falling behind in his thinking. That is, each phrase was now coming out just a little late, showing up just after one would expect it. It threw the solo off balance, and was the musical equivalent of watching a tightrope walker begin to teeter on the line. A great suspense was building.

Toward the end of that chorus—which would be the end of his solo—George sounded as though he had gotten himself into trouble. If he played anything later than he was playing right now—this second—the whole solo would fall apart! George had his eyes shut. I was quite literally on the edge of my seat as both the clarinetist and I watched him about to tumble off the tightrope.

Then, in the last eight bars, George did something amazing. There’s a special chord in the last eight—a “diminished” chord—that has an inherent tension of its own. When playing “(Back Home Again In) Indiana,” most musicians, whether they be traditional players or beboppers (or beyond), “lay” for that chord, and try to play something interesting when it occurs.
As that chord approached, George finished a phrase, and stopped playing. The suspense was excruciating. He looked around the room, took a breath, and then he suddenly played a wild phrase over that diminished chord; a bizarre flurry of notes that at once was humorous, exciting, and in some miraculous way, made sense out of all that “late” stuff he’d been playing, and pulled it all together. It of course is impossible to put into words. I wish it had been recorded.

I remember the entire band—including old Bill Campbell—shouting out, “Yeah, George!” as George modestly put his horn down on his lap and smiled. Bill played a typically swinging, interesting solo of his own, and then the whole band played a chorus out.

As we got off the stage, the band automatically gathered around George. The bassist (who, that evening, may have been another legend, the great Bill Hadnott) said, “That was really something, George!” I said, “Mr. Orendorff, that was one of the greatest solos I ever heard!” And then Bill Campbell took his cigarette out of his mouth and held it down by his side.

Bill exhaled smoke away from us, squinted, and said, quietly, “Yeah George. You reminded me of Bix Beiderbecke there…”

It surprised me that Bill had said this, for Bill was White and George of course was Black. We got quiet, and I think we all wondered how George would react being compared to a white cornetist, even a great one like Bix.

George turned to Bill and looked at him for a moment. He looked down at the floor. When he looked up, he smiled and said, “Why, thanks, Bill. That’s one of the nicest things you could have said. But man, nobody played like him! Believe me, I know, ’cause I got to hear him one night.”

Then George looked at me. I still remember how funny it was when he asked me if I’d ever heard Bix Beiderbecke in person. As I was about to answer, he suddenly realized I was far too young to have heard Bix in the flesh, and we all laughed.
Then George said, “Hey; we got a few minutes here on this break. Would you like to hear about the night I heard Bix Beiderbecke? Here. Let’s sit down. I’ll tell you ’bout it.”

There was a white circular party table nearby with enough white chairs for all of us, and we all sat down. George took a drink of soda, and began to speak softly. He had a warm voice, in a mid-tenor range:

“I was on a short tour with Les Hite’s band. We were spending a night or two in DEE-troit. We all tried to save money back then when we were on the road. There was four of us sharin’ one big hotel room. One guy was sittin’ in a chair in the corner, readin’ the newspaper. Two other guys were at a little table, playin’ cards. I guess I was readin’ a book. I used to read a lot.

“Anyway, it was pretty quiet, see? Nothin’ happenin’. All of a sudden, the guy readin’ the newspaper yells, ‘George! Who’s that little White cat you like so much, plays the cornet?’

“I looked up and said, ‘You mean Bix Beiderbecke?’

“‘Well, George,’ he said. ‘There’s an ad-ver right here in the paper, says Jean Goldkette and His Orchestra are playin’ TONIGHT right here in Detroit, over at that Greystone Ballroom!’

“The guy with the cards dropped them onto the table. ‘Man, the Greystone is just a few blocks from here!’

I was in disbelief at all of this. I was about nineteen years old, sitting with a man who had played on bona-fide classic recordings with Louis Armstrong, and now he was going to tell us about hearing Bix Beiderbecke in person. Incredible.

George went on. “Well, we got our hats and coats, and found a taxi downstairs. We got to the Greystone, an’ all lined up an’ bought our tickets, an’ went inside.”

Then, George said something that I didn’t process at the time, and only understood many years later. After he said, “we went inside,” he said, “’Course, we all had to stand in the back…”

Being a naïve white kid, I’d assumed—for far too many years—that they all had to stand at the back of the ballroom because it was so crowded. Many years later I was recalling his story, and it hit me that the real reason was because they were Black.

“One of the guys took a real chance, and took a chair from one of the dinner tables,” George said. “They gave it to me, so’s I could stand on it an’ see the band over the dancers’ heads. They knew I wanted to see that cornet player!

George went on. “I could hear ‘em pretty good, too. But…they weren’t playin’ anything too exciting. I think I heard a waltz or two.

“They finished that waltz or whatever it was, and then got up some other music. I saw the man out front—probably Goldkette, or his straw boss—stomp off, and they lit into a swing tune!”

I remember being amused at George’s description of what was presumably an up-tempo piece the band played. Of course, the so-called “Swing Era” was still about a decade away. Over the years, I noticed musicians of George’s generation made little distinction between “hot jazz” and “swing.” It was all music to them, and they had little time for worrying about labels and eras.

“They sounded terrific, man! Then, at the end of one of the choruses, the band played a modulation, an’ I saw Bix gettin’ hisself ready. Well, at the end of the modulation, Bix popped up out of his seat like a jack-in-the-box, and started blowin’ that Victor!

“Now, I been a brass player—cornet and trumpet player—most of my life. I know the instrument, an’ I know how it’s played. I gotta tell you, I ain’t never heard anything like that in my life. He was all the way across the room from us. He wasn’t overblowing the horn. He had a nice, full sound. He wasn’t blasting.”

Then George got an odd, distant look in his eyes. He went away for a few seconds. I really think he was “channeling” that tone he heard so long ago.

He said, “It was like…like a magic act, man! That sound…that sound was all around us.”

Here, George began pointing again. “I mean, it went up to THAT corner of the room—” George pointed at the ceiling—“And—” George spun around, pointing up at the far corner of the hall. “—THAT corner, and over there…I mean, that sound was just all around us, but here I was watching a kid on the stage across the room from me! I’ll never forget it.” 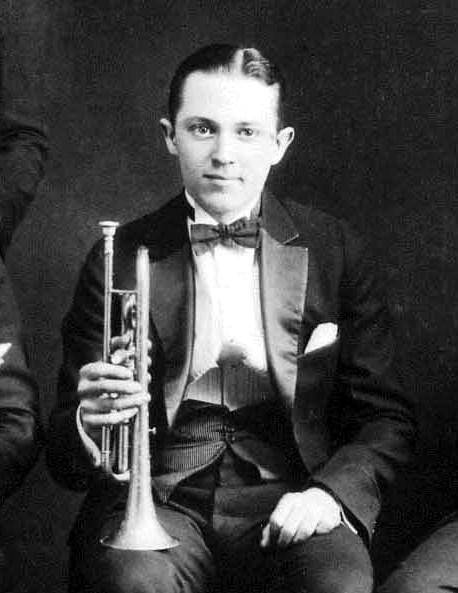 We were all nodding, and I felt as though I was back there at the Greystone with George. I smelled cigarette smoke, and could see the young man from Davenport, Iowa, over the dancers’ heads and through the blue haze. Bix’s tux and bow tie were black, his starched shirt a bright white, and the bell of his horn glowed a soft gold. And then the sound gently wrapped itself around me, just as it had George.

George took a breath, and calmed down a little.

“You know, back when I was starting out I wanted to play just like Bix. Lot of us wanted to! I wrote out his solos, and learned what I could. But then, Louis came along…”

George looked around at us, almost sheepishly. “When I heard Louis, I kind of had to go that way, you know? I hope you understand…”

I sat back in a kind of awe, that this man was actually offering some kind of explanation—just short of an apology—for having “switched allegiances” in trying to play more like Louis Armstrong!

“But, I’ll tell you, we all loved Bix. I’m so glad I got to hear him, that one time.” George turned to Bill Campbell. “Thank you, Bill for what you said. It means a lot to me.”

We all sat there with our private thoughts for a few more minutes, and then, one by one, we got up, and walked back to the bandstand, proud to play some more jazz with the great George Orendorff.

Dan Barrett is a professional trombonist/ cornetist, arranger, and composer. He enjoys performing in admittedly old-fashioned jazz styles. He has recorded for Concord Records, Arbors Records, and his own Blue Swing Recordings label, among many other labels. Dan fell in love with jazz in high school, and learned to play from much older musicians from New Orleans, who had settled in the Los Angeles area. He has played at Carnegie Hall five times, and was featured in the last bands led by Swing Era icons Benny Goodman and Buck Clayton. Another highlight of Dan’s musical life—so far—was being a member of Lueder Ohlwein’s Sunset Music Company. Write to Dan at: www.DanBarrettMusic.com.