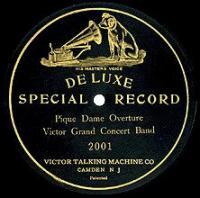 In 1903, two of the major disc record companies ventured into unexplored territory: long playing records. The Victor talking machine company and Columbia phonograph company sold 14 inch records that played at slow speeds in the middle of 1903. To this day the story of these records remains mysterious, as even at the time they were sold they were shrouded in secrecy. Each of these records were priced at two dollars, so only the most elite of record buyers could afford them. They were unwieldy, large, heavy, impractical, and nearly impossible to store—yet they are worth their weight in gold to any collector of early recordings.

No scholar can figure out why Victor and Columbia started to manufacture these recordings, though it may have been under the pressure of a young Fred Hager. When these records were being made Hager was the music director at Columbia, and didn’t make any public announcements that he was also connected with Victor. Hager was boastful of his leadership to all the major labels in 1901 and 1902, but by 1903 he was on thin ice. Victor Herbert got him and the rest of the Zon-O-Phone company in trouble for using his name on their label without his permission. This suit left Hager eager for outside sources of money not connected with Zono.

By this time, Eldridge Johnson (the founder and inventor of the Victor) had invested a good amount of his stock in Zon-O-Phone, albeit quietly. Victor was already making plans to buy out the smaller label, so it seemed like a good idea to get Hager involved with their product somehow. In the winter of 1902 into 1903, Hager signed a contract with Victor. This contract lasted three months and allowed Hager to take his entire band and orchestra of nearly 40 musicians to Philadelphia each week.

Under this contract, Hager carted his entire orchestra to and from Philadelphia each week for three months. It must have been a harrowing ordeal, with so many instruments and instrumentalists to keep track of on a nearly two hour train ride from the Bronx to Victor’s lab. As Hager’s band started making these records, they were given the pseudonym of Victor Grand Concert Band, and given their own number block in the catalog. These records started with no. 2000 and went to about 2050, but these were only the 14 inch records.

Hager took great pride in the production of these 14 inch records. With his entire orchestra, he likely spent much time balancing everything correctly, and rehearsing them until he couldn’t stand anymore. In spite of all the crowding, balancing, rehearsing, and yelling, these 14 inch records turned out to be some of the most well produced of their day. They featured nearly twice the amount of musicians as a typical band/orchestra record of the time, and included an array of percussion whacked by the 21 year old Jimmy Hager. The fullness of the band is quite astonishing when played on an electric turntable, even very slight temperament and lyrical tones were captured masterfully, a testament to the so-called “disciplinarian” nature of Hager’s bandleading.

A majority of these 2000 Victors were overtures, very high-class material for those gilded age elites who could afford the two dollars each. Such a price was often more than what any average worker made in a week, and perhaps not even that. This would equal approximately to paying 100 dollars for an eight minute overture in today’s money. Hager was never one to aim low, so such an ambitious project as these Victors shouldn’t come as much of a surprise.

In addition to the 14 inchers, Hager and his entire band recorded marches, parlor pieces, and instrumental solos on 12 and 10 inch Victors in the 2000 to 2200 block. Justin Ring’s 1901 parlor piece “Falling Leaves” and Hager’s “Laughing Water” were among the few popular pieces they recorded, of course for vanity purposes. Each of which were included in Victor’s catalog with long detailed write-ups, likely written by Hager himself. In the descriptive copy for “Laughing Water” it is stated glowingly that the flutes and woodwinds “sound almost like that of strings,” and if you know anything about who was in Hager’s orchestra, you’d recognize that one of the leading chairs for the woodwinds was Justin Ring playing clarinet and saxophone. It’s quite expected of Hager. 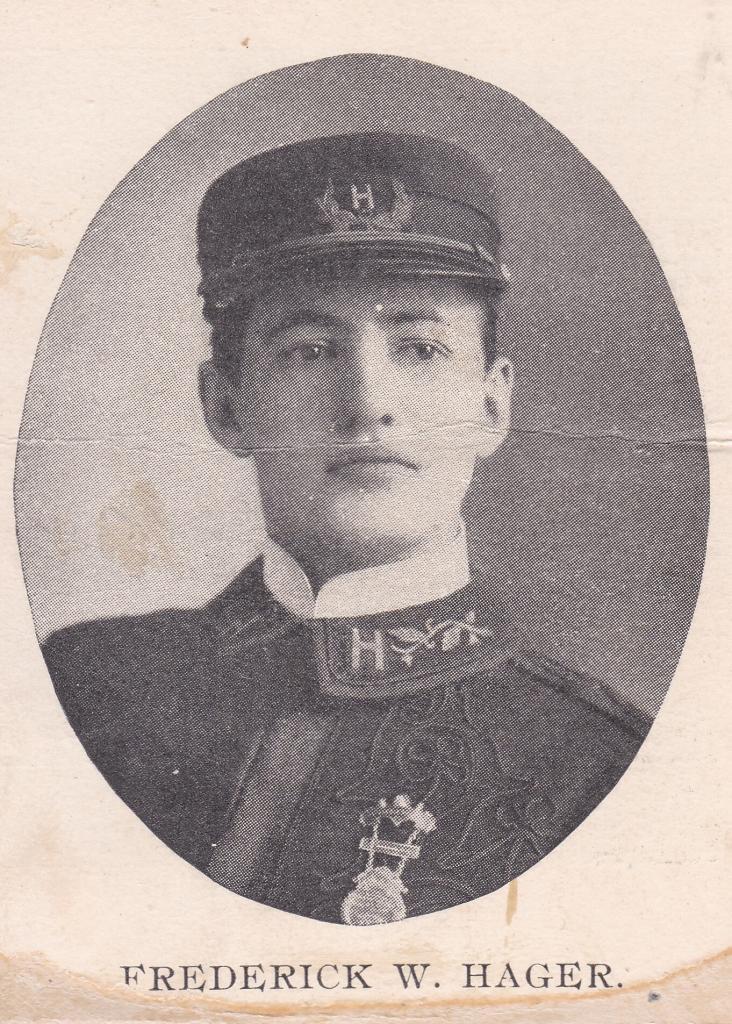 When these records were made, the specific recording dates were not written down in Victor’s ledger, which was rather unceremonious for the time. Looking up the dates for these particular records is very difficult for modern scholars, and until only recently was it discovered that the 14 inchers were made not by a standard Victor orchestra, but by that of Hager’s.

Looking them up in discographies and be vague and unhelpful, as there is a perfect three month gap between number 1999 and 2050. Victor number 1999 was recorded at the very end of February 1903, and 2050 just at the end of May of that year. But even after that date, there were plenty of other pieces recorded by Hager during the three month contract that would later be assigned numbers between 2051 and 2200.

Scholars thought for many years that these records were made at the Zon-O-Phone recording lab, as the circumstances of their creation seemed oddly suspicious. The Fagan and Moran discography of Victor claimed that the mere existence of a few extant Y-prefix Victors indicated that they were recorded elsewhere. This was the long standing belief until Hager’s own scrapbook proved otherwise. To this date, only three Y-prefix Victors have been discovered. Why exactly Victor used Y on so few records, and not on all of Hager’s Victors, remains a mystery. These unusual Victor records were made at the Philadelphia lab, but not by Victor musicians.

Hager jumped into Victor at a choice time however. At the beginning of 1903, Victor was beginning to have some serious changes within its management and talent staff. There was talk about Arthur Pryor starting his own band, and the previous managers of the label were beginning to move on. This slight sense of chaos left the field clear for Hager to essentially take over Victor for three months, and get a good amount of credibility and bragging rights for his high-class musician friends in the union and the Masons, at least, for a little while.

Hager could be credited with some of the earliest recordings of famous overtures such as 1812, The Flying Dutchman, Samson and Delilah, and others. Such achievements as this got around in the music world, and thanks to Hager’s narcissism, we have a well preserved article from The Focus, dated 1903, detailing the contract and many of the pieces his band recorded in this period.

At the contract’s end, Victor was weary of their 14 inch burden. They kept these records in the catalog until at least the end of the next year, but along the way they renumbered the original series, to keep confusion away from their new 2200 series and so on. Hager was excused from Victor quietly, but as expected, Victor officially bought Zon-O-Phone within the next year. The legacy of these records is rooted in their extreme rarity. Many collectors who know of them find them to be an ultimate prize, with only the most intense and senior collectors having perhaps three of them at most. It is estimated that the amount of surviving 14-inch Victors numbers between 50 and 200.