It Is As If There Were Two Maple Leaf Clubs…

“There has to be a balance between literally white-washing or ignoring history and presenting it in actual context…it appear(s) no matter what approach is taken, some will be offended that it still exists, while others might be offended that it is being ignored.” Those are the well-spoken words of prolific ragtime historian, Bill Edwards, referring to the broad subject of political correctness but also to the dilemma I am about to address.

From the emergence of my interest in ragtime and particularly Sedalia’s role in ragtime history, I have been conflicted about the actual character of the Maple Leaf Club and just how it figured in ragtime’s story. On one side of the issue, I find a romanticized image of the club as a benign Afro-American men’s club replete with an ornate round bar, bright velvet curtains draping the windows, colorful art on the walls under a molded tin paneled ceiling, with a library. And, of course, with a bold, brassy upright piano to one side with a colorfully dressed piano player entertaining the beer quaffing clients dressed in three-piece suits standing around in awe of “The Entertainer’s” talents.

On the other hand, there is the image of The Maple Leaf Club as little more than an upholstered sewer and den of iniquity where the depraved of Sedalia hung out and nightly turned Main Street out front into what its nickname implied, a “Battle Row.”

My first incursion into the segregated Sedalia north side community was as a police safety officer. I put myself through college working on the police department in the afternoons and at night while finishing my bachelor and graduate degree in the mornings. (For my assignments as a safety officer, a poor colleague on the department had to go along with me dressed in an oppressively hot and smelly costume as McGruff the crimefighting dog.) This experience, at my colleague’s expense, afforded me an opportunity to get acquainted with the African American community in a positive way.

In 1971, as a first-time elementary teacher in the still segregated Hubbard school, I further connected with the community and began planning the first Joplin festivals. My Hubbard friends graciously supported my effort and appreciated that an African American was being honored. However, I always sensed a bit of caution until Rose Nolan, a North Side activist, confirmed that there was indeed apprehension. She reminded me that the Maple Leaf Club of Joplin’s day had a rather terrible reputation and that the white community accusingly and stereotypically held the minority community responsible for the immorality associated with the club. “They used it as a cudgel to embarrass and humiliate us and to drag down Joplin’s reputation by association.”

Thus, when studying the history of Sedalia’s most famous social institution, it is almost as if there were two distinctly different Maple Leaf Clubs: a respectable “gentlemen’s” club as described in the December 1898 Articles of Agreement, and a raucous “den of iniquity,” described by local clergy and community leaders in their December 1899 Petition to close the clubs (including the Black 400 Club.)

I have been looking at the evidence in an effort to determine just what the club had been. Dr. Edward Berlin provides a marvelous history of the Maple Leaf Club in his Joplin Biography, The King of Ragtime: The Saga of Scott Joplin, 2nd Edition, (Oxford U. P., 2016). However, my approach will be to chronologically indicate the contrasting reports of the club’s activity and reputation. I am using the same newspaper articles to which Dr. Berlin had access. The difference being that he meticulously went through the papers in microfilm and hard copy format and I now have the benefit of digital search engines (which means I haven’t observed the evidence in light of everything else reported at the same time as Dr. Berlin had.)

As Joplin’s biographer and others point out, there are interview accounts of a Maple Leaf-type club before its first actual appearance in the papers at Thanksgiving 1898, at the MLC where “Walker Williams is a shining light.” On December 8, a masked bal/,,n\l was held at the Maple Leaf Club, referred to as a “colored organization,” benefitting the Queen City Cornet Band. Since an address is rarely given for the club, I do not automatically assume it was always in the same quarters.

Officially, the Articles of Agreement of the Maple Leaf Club were signed and recorded at the Pettis Country Court House, 13-14 December 1898, with the incorporation papers recorded on 23 December. I can still hear the excitement in County Recorder Naomi Brown’s voice when she called me in the winter of 1976 to say she had found the original recorded entry. The document’s full text can be found in Appendix E of Dr. Berlin’s King of Ragtime.

It was to have been established for forty years, with a maximum of 300 resident members and 100 non-resident members. The objects and purposes of the club were to maintain a club house (in Sedalia) and to advance “by social intercourse, the bodily and mental health of [the membership], and by the friendly interchange of views and discussions, advance the interests of its members; to obtain a place of common and friendly intercourse of such members with each other; to obtain a library for its members, other species of amusement and entertainments for the benefit of its members.”

Thus, the third paragraph of the agreement describes a positive, well-intentioned respectable gentleman’s club while leaving open the option for later defining the “other species of amusements and entertainments” that led to the club’s negative reputation. For those following this carefully, it will be helpful to have the list of the officers and members listed in the document as found in Dr. Berlin’s Appendix. 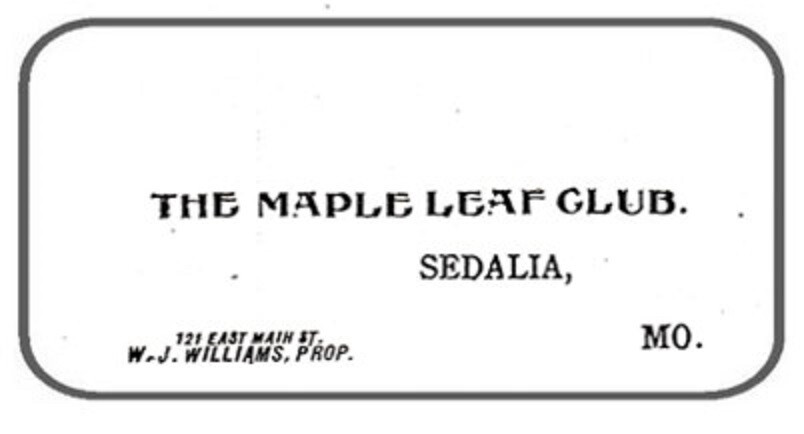 Before going into the newspaper accounts of the club’s brief formal existence, I must mention the famous business card I bought from Ed Cook, a Sedalia antique dealer, in 1973. He found it among items in a “North Side” estate sale. The card gives an address at 121 E. Main with W. J. Williams listed as proprietor. The reverse side is also of great interest listing the club’s “The Good Time Boys.” Here we have master Scott Joplin listed as the entertainer. However, the card seems to be loaded with inuendo implying the involvement of the good time boys with the ladies. Whether only male braggadocio or a reference to prostitution or possibly both is unknown. 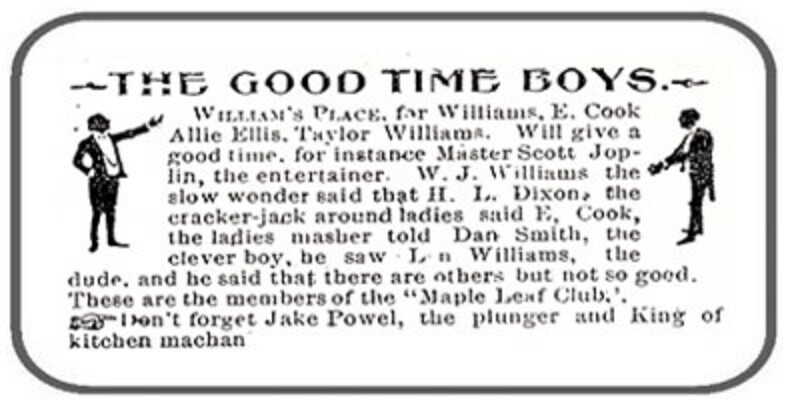 Chris Ware pointed out in The Ragtime Ephemeralist No. 3, (Ware, 2002, p. 1301) that the small figures used on the card were the same as from the print shop that published The Sedalia Times where W. H. Carter was the African American editor 1893-1905. However, the dates of use of these figures cannot be determined beyond Carter’s years at the paper.

And so, the Articles of Agreement and the calling card both leave the nature of the club open to opposing interpretations. Next month I will remark on the conflicting reputations of the club based on existing evidence.

Also See: What was the Maple Leaf Club really like?