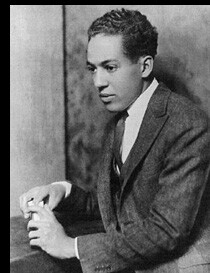 Born in Joplin, Missouri, James Langston Hughes (February 1, 1901 – May 22, 1967) was a member of an abolitionist family. He was the great-great-grandson of Charles Henry Langston, brother of John Mercer Langston, who was the first Black American to be elected to public office, in 1855.

Hughes attended Central High School in Cleveland, Ohio, but began writing poetry in the eighth grade, and was selected as Class Poet. His father didn’t think he would be able to make a living at writing, and encouraged him to pursue a more practical career. He paid his son’s tuition to Columbia University on the grounds he study engineering. After a short time, Langston dropped out of the program with a B+ average; all the while he continued writing poetry. His first published poem was also one of his most famous, “The Negro Speaks of Rivers”, and it appeared in Brownie’s Book. Later, his poems, short plays, essays and short stories appeared in the NAACP publication Crisis Magazine and in Opportunity Magazine and other publications.

One of Hughes’ finest essays appeared in the Nation in 1926, entitled “The Negro Artist and the Racial Mountain”. It spoke of Black writers and poets, “who would surrender racial pride in the name of a false integration,” where a talented Black writer would prefer to be considered a poet, not a Black poet, which to Hughes meant he subconsciously wanted to write like a white poet. Hughes argued, “no great poet has ever been afraid of being himself.” He wrote in this essay, “We younger Negro artists now intend to express our individual dark-skinned selves without fear or shame. If white people are pleased we are glad. If they aren’t, it doesn’t matter. We know we are beautiful. And ugly too… If colored people are pleased we are glad. If they are not, their displeasure doesn’t matter either. We build our temples for tomorrow, as strong as we know how and we stand on the top of the mountain, free within ourselves.”

In 1923, Hughes traveled abroad on a freighter to the Senegal, Nigeria, the Cameroons, Belgium Congo, Angola, and Guinea in Africa, and later to Italy and France, Russia and Spain. One of his favorite pastimes whether abroad or in Washington, D.C. or Harlem, New York was sitting in the clubs listening to blues, jazz and writing poetry. Through these experiences a new rhythm emerged in his writing, and a series of poems such as “The Weary Blues” were penned. He returned to Harlem, in 1924, the period known as the Harlem Renaissance. During this period, his work was frequently published and his writing flourished. In 1925 he moved to Washington, D.C., still spending more time in blues and jazz clubs. He said, “I tried to write poems like the songs they sang on Seventh Street…(these songs) had the pulse beat of the people who keep on going.” At this same time, Hughes accepted a job with Dr. Carter G. Woodson, editor of the Journal of Negro Life and History and founder of Black History Week in 1926. He returned to his beloved Harlem later that year.

Langston Hughes received a scholarship to Lincoln University, in Pennsylvania, where he received his B.A. degree in 1929. In 1943, he was awarded an honorary Lit.D by his alma mater; a Guggenheim Fellowship in 1935 and a Rosenwald Fellowship in 1940. Based on a conversation with a man he knew in a Harlem bar, he created a character know as My Simple Minded Friend in a series of essays in the form of a dialogue. In 1950, he named this lovable character Jess B. Simple, and authored a series of books on him.

Langston Hughes was a prolific writer. In the forty-odd years between his first book in 1926 and his death in 1967, he devoted his life to writing and lecturing. He wrote sixteen books of poems, two novels, three collections of short stories, four volumes of “editorial” and “documentary” fiction, twenty plays, children’s poetry, musicals and operas, three autobiographies, a dozen radio and television scripts and dozens of magazine articles. In addition, he edited seven anthologies. The long and distinguished list of Hughes’ works includes: Not Without Laughter (1930); The Big Sea (1940); I Wonder As I Wander (1956), his autobiographies. His collections of poetry include: The Weary Blues (1926); The Negro Mother and other Dramatic Recitations (1931); The Dream Keeper (1932); Shakespeare In Harlem (1942); Fields of Wonder (1947); One Way Ticket (1947); The First Book of Jazz (1955); Tambourines To Glory (1958); and Selected Poems (1959); The Best of Simple (1961). He edited several anthologies in an attempt to popularize black authors and their works. Some of these are: An African Treasury (1960); Poems from Black Africa (1963); New Negro Poets: USA (1964) and The Best Short Stories by Negro Writers (1967).

Published posthumously were: Five Plays By Langston Hughes (1968); The Panther and The Lash: Poems of Our Times (1969) and Good Morning Revolution: Uncollected Writings of Social Protest (1973); The Sweet Flypaper of Life with Roy DeCarava (1984).