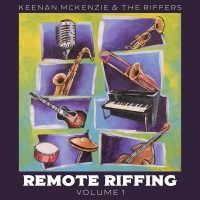 All being well, the socially distanced performance of jazz will soon be a thing of the past. Musicians will be able to gather again, arranging mics and adjusting levels to deliver perfect takes—be it to live audiences, or recording equipment. But until that day comes, let’s keep marveling at what some very talented musicians and producers have been able to put out against all the odds.

Keenan McKenzie kept himself busy last year, arranging twelve tracks and twenty-three musicians into two delightful volumes of dance-friendly Remote Riffing. The first of these reproduces six original tracks from a previous release, 2017’s Forged in Rhythm, and adds to them one more—the aptly-named “Lockdown Walkdown”; the second plucks three more titles from past recordings and garnishes with two classics by the Gershwins and John Schonberger.

These tracks were clearly arranged with dancing in mind. (Indeed, Volume 2 was born of a bespoke set for the CalBal Live Balboa festival. Which was great fun, by the way.) There’s a welcome variety of tempos on here, from a relatively sedate 105 bpm (“My Well-Read Baby”) to a floor-splintering 238 bpm (“Lights Out”—and it would be for me, after three minutes at that speed). Helpfully, McKenzie provides us with the speeds so I know to which ones I’m dancing Lindy, to which I’m attempting Balboa and for which I won’t even get up.

All of the original compositions are superb, showcasing McKenzie’s supreme talent for composing jazz which pays homage without borrowing so heavily as to sound derivative. For instance, “Buffalo Convention” takes a scoop of Waller-like piano (Chris Dawson), a side of Reinhardt-esque guitar (Jonathan Stout) and serves it up with a sprinkle of McKenzie’s own take on a Lunceford-like horn. “Cincinnati” is a ragtime stomper, but garnished again with a smooth sax which salutes the stars of R&B. (It reminds me of a favourite record: the fabulously anachronistic Louis Jordan Swings!, which Jordan recorded with the late Chris Barber’s band in 1976.) 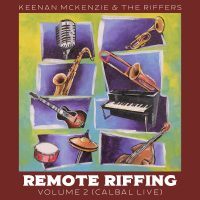 You can consider most of these as alternate takes of the Forged in Rhythm numbers, featuring rearranged intros, reimagined solos and the likes. Curiously, these revamps sound slightly fuller and tighter—a bit like one’s slacks just after Christmas—than the 2017 versions, for which I found myself turning up the volume when comparing side by side. It’s as though remote production, with each instrument recorded in a different state/continent, gives more scope to find the perfect balance. Or perhaps three years’ more experience at the mixing desk have sharpened McKenzie’s skills there.

But there can be no doubt that these guys and girls knew what they were doing, looking at the personnel involved. Performing alongside Stout and Dawson are bright young things like trumpeters Gordon Au, Noah Hocker, and Renée McGee, saxophonist Dexter Moses and vocalist Laura Windley (who always impresses, for someone who fell into jazz singing by accident).

There’s really no choosing between the two volumes, as if it were either-or (although beginner Lindy hoppers won’t find much they can keep up with, on the faster second disc). Get them both while you can—fingers crossed, remote recordings like this are going to become rare real soon.