The picture with Louis Armstrong and two young boys on the steps of his Queens home reminds me of my first wide eyed encounter with him. My good friend, Don Boyer, discovered that Louis would be appearing at the Manitau Lake Danceland in Rochester, Indiana. We were seniors in the high school band and we had formed both a dance band as well as a dixieland band. Don talked his dad into allowing us to use the family Studebaker and we lined up a couple of dates. This was the first time I had seen Louis in a live performance! 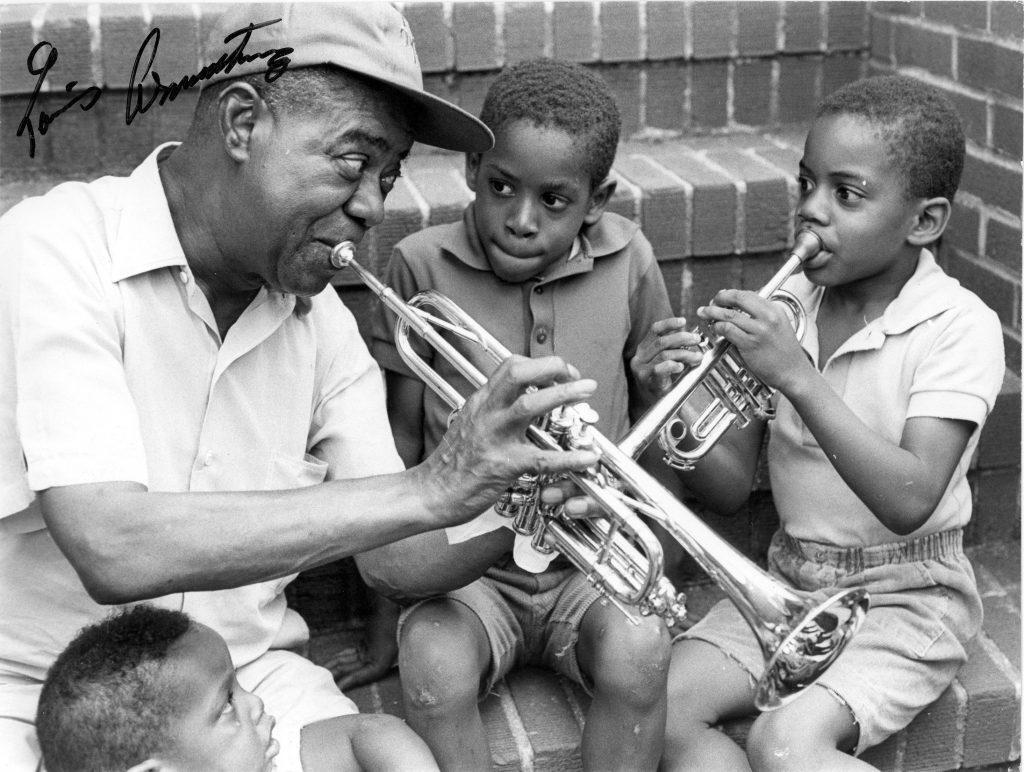 The four of us piled into the Studebaker and after a two hour drive, we arrived and parked in front of Danceland. The first set was scheduled for 7:00 and it was only 5:00 p.m. so we found a table. I was very amazed as I glanced across the dance floor near the entrance. Louis was sitting at a small table two-fingering his beloved typewriter. I discovered later that he took it with him every where he traveled and, he recorded, almost in a diary style, what he had seen and done on his various travels. We walked over and did what most Satchmo fans often did: we stood and stared. When he saw us, he motioned for us to join him! We were almost overwhelmed but we hurried over!

The day was a hot one so Satch sat in his undershirt and had a hankie around his head. Smiling that huge Satchmo smile, he asked us where we lived and about our interest in jazz. He had never heard of Buchanan, Michigan, but when we mentioned we had a trad band and played mainly New Orleans jazz tunes, he asked us to tell him what tunes we used. Once we reviewed all ten with him, he gave his approval. The mood changed when he started talking about the Korean War. He made it clear that he wars anti-war!

When I told him I planned to move to New Orleans for a few weeks in ’53. He suggested I talk to Sid Davilla, the owner of the Mardi Gras Lounge. Sid owned both the bar and the apartments upstairs. (A year later I did as he suggested and had an apartment above the Lounge. From my porch, I looked down on the Famous Door. [Read: Bourbon Street, 1953]

Don and I both realized that we had forgotten we had dates waiting for us. Louis made it very clear that he enjoyed talking with young people, especially young musicians. The picture above, tho with younger boys, reminded me of our visit on that summer day at Danceland. The band was superb but the heat caused Don to pass out as we stood near the stage and when Louis saw that from the stage he leaned over to the mike and said “Give him some room.” Don recovered quickly and we managed to get our dates back to Buchanan before midnight.

That fall Don and a few others caught a Satchmo gig in Chicago. Louis walked by their table, saw Don, and invited himself to join them. In the winter of 1958, when I was at Ball State, we made arrangements to bring Satch’s band to the campus. During a brief discussion before the show opened, Louie remembered the Danceland gig. Today, Satch remains my number one jazz musician!