Really The Blues by Mezz Mezzrow and Bernard Wolfe 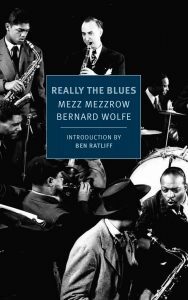 The New York Review of Books decided to reprint this classic 1946 hip work about the jazz world, especially New York and Harlem, by Mezz (born Milton) Mezzrow and Bernard Wolfe. It has a new introduction by jazz writer Ben Ratliff.

This jazz memoir by Mezzrow and Wolfe is a classic. With memoirs, it’s difficult to corroborate facts from hyperbole and, sometimes, outright falsehood. This book should be read and interpreted with this caveat: It is filled with jazz jargon, so much so, that authors included a ten page glossary. Some terms have moved into standard vocabulary, e.g. “weed.” Others remain obscure and incomprehensible to the uninitiated.

For those few who are completely unacquainted with Mezzrow, he was a Jewish clarinetist who decided to become black. He married, second time, a black woman and moved to Harlem. He recorded with some star performers, including Sidney Bechet, and got the endorsement of French jazz enthusiast Hugues Panassié. However, most critics felt that Mezzrow was a mediocre clarinetist, or worse. Mezzrow was known as a dealer in high-quality marijuana and “Mezz” became a one of the many synonyms for the product.

Bernard Wolfe (1915-1985), co-author of this book, is of interest because of his background. He served for eight months in 1937 as personal secretary to Leon Trotsky and is best known for his 1959 novel, The Great Prince Died, a fictional account of Trotsky’s assassination.