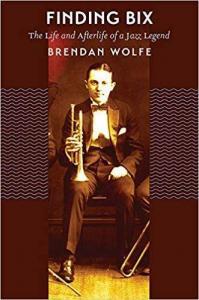 Recently I saw a Quad-City Times story about yet another book purporting to enlighten the public about the life and career of Bix Beiderbecke. I also saw the author’s unkind criticism of Bill Wundram in a recent column in these pages [of the Quad City Times]. Bill came far closer to the essence of Bix. His many interviews with family and friends have become an important contribution to the Bix Museum archives.

As I have been living in Shanghai, China, for the past few years, keeping up to date on the latest rubbish about Bix isn’t something I go out of my way to do. I stay away from it as much as possible because it is endless.

As a means of introduction, I am the one who helped Philip Evans for over 20 years with his lifelong research on Bix. After Phil’s death, I inherited his archives, and now they reside at the new Bix Museum in Davenport. It was because of the efforts of his late wife, Linda, and me that Phil published his last book on Bix, focused primarily on day-to-day facts and not so much on stories.

The archives include thousands of letters from those who knew Bix personally, as well as hundreds of hours of taped interviews. After Phil’s death, I spent 15 years restoring and preserving more than two-dozen crates of letters, articles, photographs and tape recordings.

This latest “biographer,” Brendan Wolfe, after a brief phone call, never contacted me again to verify any of the bovine waste material that he unleashed.

None of the family stories put forth are true. Bix was never shunned by his family, nor was he ever “banished” from Davenport. Nor were there recordings sent home by Bix that were stuffed into a closet and never opened. His family adored him and listened faithfully whenever he was on the radio.

The latest “biographer” brings up the arrest of Bix for “lewd & lascivious act with child.” Those false charges were dropped almost as fast as they were filed. Bix was known as a man who would not swear in front of women, nor would he put up with those who did. He was the guy who always opened doors and helped seat any woman in a social gathering. It was simply his nature. At this time he was also dating the girl said to be the prettiest in Davenport, Vera Cox.

As for Bix being an alcoholic, he certainly did have a drinking problem. He was known to binge drink for at least 12 hours or more at a time. But then he could remain totally sober for weeks or months. He simply did not have a cutoff point that tells most people “I’ve had enough.” But, except once, he never drank before a recording session. Music was too important to him. So to claim there are “a million and one stories” about Bix being drunk all of the time is simply wrong, as is the ridiculous story about Bix almost being hit by a train.

Mezz Mezzrow, Ralph Burton, Richard Sudhalter and so many others – their embellishments are frauds, all. This new author picks up some of the same old trash.

The thousands of letters in the Bix Museum archives include a few similarly false stories intermingled with truths. In the interest of history and context, I let them stay, even though realizing that someday someone will make another great “discovery” trying to tarnish Bix.

It’s a shame that fact-checking doesn’t mean much when you’re trying to sell your product with insinuations and references to fictional stories published up to 85 years ago. This new author wasn’t the first and certainly won’t be the last. Instead of a new informative book, the public gets another burnt offering based on made-up tales and hearsay. From what I gather, this rendition seems to be selling like fur coats at a PETA convention. And that’s a good thing.

This piece was originally published in the Quad City Times under the title “So, we suffer yet another flawed ‘biography’ on Bix” on September 17, 2017.

Scott Black is widely recognized as one of the world’s foremost authorities on Bix Beiderbecke. His massive collection of Bix research has become a centerpiece in the newly established Bix Museum archives in Davenport. Like Bix, Scott is a cornet player. He currently performs at jazz clubs in Shanghai, China.