I showed Ralph a list of tunes I knew. He pointed at a squiggle and said, “What’s that?”

He grinned, and I remembered that Ralph Grugel didn’t read music. Anyway, when the band came on stage to play their third set, I brought my cornet and stood in the front line beside Ralph. He usually played trombone, but all of his usual cornet/trumpet players were busy that night. He was holding a cornet also.

“I haven’t played it for a while,” he said. “My lip might give out by the third set. So I would like to have you sit in, and help out.”

Ralph had heard I played cornet, but he had never heard me play. The last time I had played with a band was about 60 years ago when I forgot to show up at my high school band concert. Well, I had played when we practiced for the concert. Because my trumpet case was the largest, the band leader gave me all the music sheets for four trumpet parts. I was so disinterested in playing at that time that I completely forgot about the concert scheduled for Sunday afternoon. I don’t know how the other three trumpet players managed without the music. I never understood why only one trumpet would play the melody, and three others would toot notes that sounded pretty lame when you practiced at home. I was always fourth trumpet when we competed in our playoffs. I never played my trumpet again after high school in 1949, until I heard trad jazz in Cleveland in 1966.

I got interested in playing again when I heard Ralph’s band, The Bourbon Street Bums, play at Fagan’s in the Flats beside the Cuyahoga River in Cleveland, OH. Tonight, in 2008, Ralph’s Eagle Jazz Band was playing at Tommy’s in Rocky River, OH. I only knew the melodies to about ten tunes. I warned Ralph that if he called a tune I didn’t know, I would just stand there looking stupid.

Great. I knew that one, and had even practiced a solo I created. The entire band blew through the opening chorus, and then Joe Richards blew his great clarinet solo. Cornet was next. I blew my solo. Didn’t miss any notes. Wasn’t sure how it sounded until Joe whispered to me,“That was great!”

I could hardly believe it. Joe played such great solos. His compliment made me feel seven feet, five inches tall, instead of five feet, seven inches. The tune continued, and after Joe played another solo, he whispered to me, “Take another solo.”

“I only know the one I played.”

I decided not to press my luck. Anyway, Ralph was not expecting me to do any more than come in again with the melody on the final chorus. He might not have liked it if I started soloing again.

The set continued with “Precious Lord Take My Hand,” and “Engineer.” Tunes on my list, and I was able to sing the duet with Ralph on “Engineer.” The crowd was noisy, and the microphones garbled the words, so I guess it wouldn’t have mattered if I forgot some of the words.

“We’re going to close this set with an old tune that they have fun with at Preservation Hall,” Ralph said. “The Old Gray Bonnet.”

Ralph had thrown a curve ball at me. That tune was not on my list. But I was lucky. I had practiced the tune, and didn’t put it on my list because I had never heard Ralph’s band play it. So his two cornet band ended the set by blasting through Old Gray Bonnet. I sat down feeling like I had won a lottery. I was glad his lip was holding up, so he didn’t ask me to sit in on the fourth set. 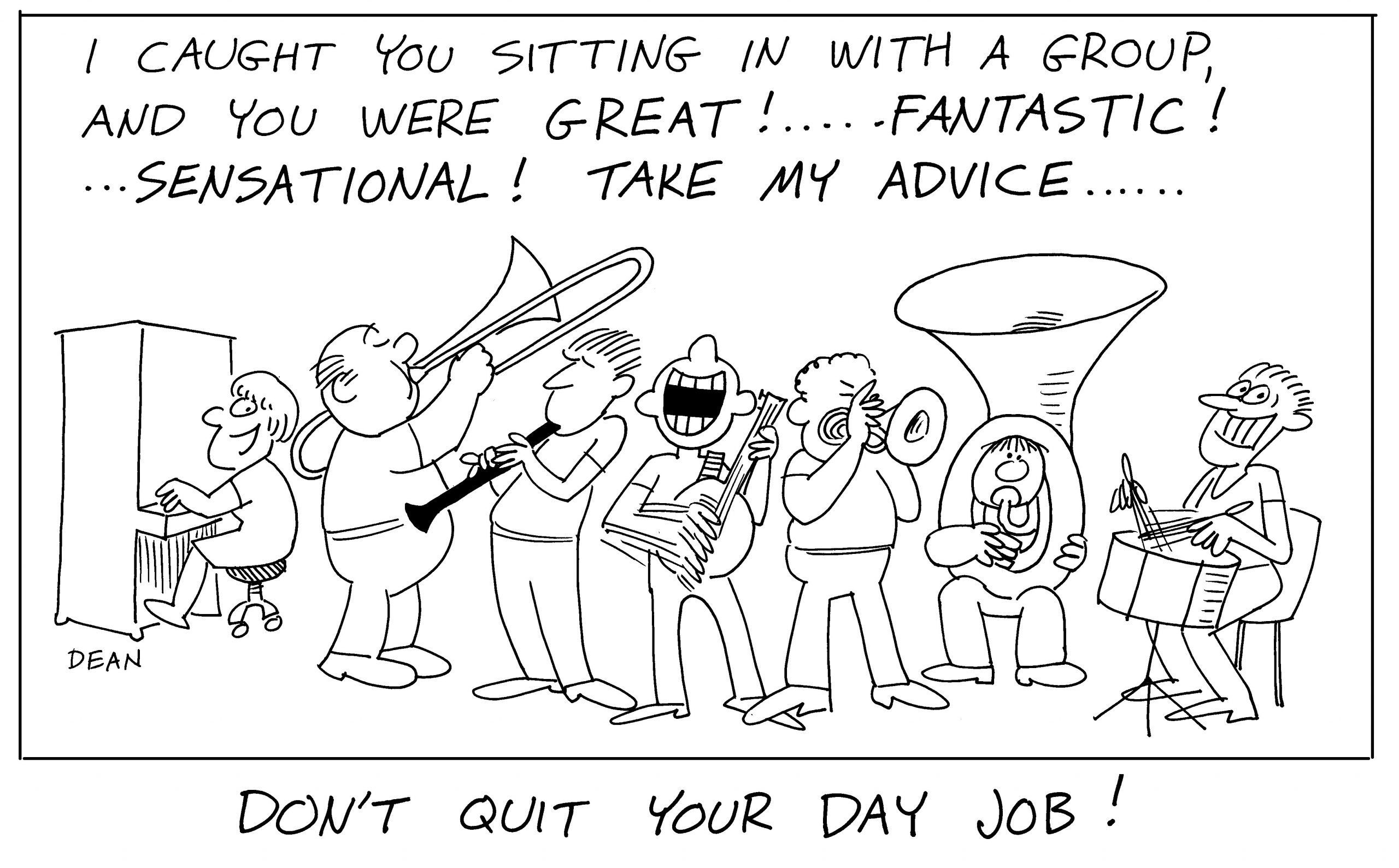 I sat in again at another club, and did okay on several tunes. He called the same tunes in his third sets that year, and I had practiced them. This time I was playing beside his regular cornet/trumpet man, Dick Petscher. Dick let me take a solo on “His Eye is On the Sparrow.” I sat down feeling lucky again, and thinking maybe I would be a musician if I kept at it. But good sense prevailed. I would never be able to do more than memorize a few simple melodies, and create a few simple variations for solos on those tunes. If I kept sitting in, it wouldn’t be long before I made an ass of myself by standing in a front line and playing nothing. Or tooting a few bad notes to pretend that I knew how to play harmony.

I got great joy out of the two times I played with Ralph’s band. The set at Tommy’s was recorded on a small Radio Shack cassette recorder, but the crowd noise overpowered the music. So I have only the memory, and the satisfaction that I had sense to quit when I was ahead.

The only time I enjoyed playing trumpet in high school, was at the District Finals in the Iowa State Basketball tournament. I was fourth trumpet, and supposed to play the notes on the fourth trumpet chart. Our school fight song was “Washington and Lee Swing.” A tune that trad jazz bands play often. I had memorized the melody on the first trumpet part.

When our team ran out onto the floor, the band leader started waving his baton, and we launched into the fight song. The other three trumpet players had not arrived yet.

I saved the day by blasting the melody. Well, maybe some clarinets were playing melody, too. But I thought the rest of the band was playing harmony and beat, and if I hadn’t played melody? Well, the students were cheering so loudly that I they might not have even heard the band. Our team lost the game, but I thought my effort might have been the inspiration that kept the score close for the first half.

There may be a lot of jazz fans that play an instrument, but not well enough to try to play in a band. I know what stopped me from learning to play well when I was in high school. My parents bought a trumpet, and paid for some private lessons when I was in fourth grade. After a year or so, I lost interest, and didn’t want to spend spare time practicing the trumpet.

“But we bought you a trumpet, because you said you want to play it. And we paid for lessons. You can’t give it up now.”

That was not enough reason to make me want to practice. I got seriously interested in learning cartooning, and playing in table tennis tournaments. When I had spare time I wanted to practice those things.

And the marching band experience did it. I hated to try to march, and spell words, or make pictures for the football fans to see, and play the trumpet at the same time. It was sometimes so cold I couldn’t blow a note for the first few bars, and I was afraid someone would make a wrong move and smack my trumpet back into my teeth. I never thought marching band music sounded good when the horns were being pointed in different directions. You couldn’t hear the melody. And why play music if the audience can’t hear a melody? But I couldn’t quit the band, because my parents had bought a trumpet and etc.

And the band never played any current popular tunes. It was only classical for concerts, and marches for football games. The two guys who were always first and second trumpet played in dance bands after school. They really wanted to be musicians, and they practiced.

I remember my sister practicing her violin. She was supposed to play an exercise on a chart. But she was just sawing on one note, and singing a pop tune of the 1940s, “Pistol Packin’ Mama.” She never kept playing after school. Classical and exercises just weren’t fun to play.

If our school had some choices. Play classical music in the orchestra and the band. Play pop tunes in small dance band groups. Play jazz in small combos. But we didn’t have those choices.

I don’t regret practicing cartooning and table tennis in my spare time, and neglecting the trumpet. I had a day job as a cartoonist, and won a bunch of table tennis trophies. But if had choices back then….maybe….oh well.

I love to listen to trad jazz. I bought a beat up Lamoreaux Freres cornet at an antique shop, and spent over $200 to make it playable. I play some melodies that my dogs enjoy. They sit in with me. I once had three dogs. A beagle/ basset sang harmony, a little brown mutt hummed, and a husky barked percussion. We never played any gigs in clubs, but we had some good jam sessions in the living room. Their favorite, and mine, was “Fifty Miles of Elbow Room.”

Dean Norman is a contributor to the Earlyjas Rag in Ohio. His writing and artwork has frequently appeared in The Syncopated Times.