Superstride: A Biography and Discography of Johnny Guarnieri by Derek Coller 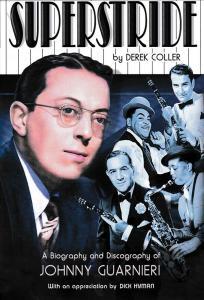 On mentioning Johnny Guarnieri (1917-1985) to a doctoral student who was writing a dissertation on a jazz topic, I was only moderately surprised when the student responded, “Who’s that?”. The surprise was only moderate because I had come across this reaction before, and Derek Coller, the book’s author, implicitly acknowledges that Guarnieri has fallen into relative obscurity. He reports that jazz pianist Dick Wellstood, when booking pianists for Hanratty’s, a major jazz venue in New York in the 1980s, was shocked to learn that many customers had never heard of Guarnieri. Among giants of jazz piano, Guarnieri must be among the least remembered.

This book, in telling Guarnieri’s story and highlighting his accomplishments, may become a factor in reversing his undeserved obscurity. He stemmed from generations of musicians and string instrument makers, going back to the famed 17th and 18th century Guarnerius family of Cremona, whose instruments are still valued today, preferred by some notable violinists over the Stradivarius.

Johnny’s talent developed early, and at the age of 15 or 16, by which time he was trying to sound like Fats Waller, he impressed “father of stride” James P. Johnson with his playing. It did not take long for the rest of the jazz world to notice him. In 1939, at age 22, he reached one of the pinnacles he had aspired to, playing with Benny Goodman’s orchestra and various combos. Not one to stand still, he would soon move to other top orchestras, such as those led by Artie Shaw (also with Shaw’s Gramercy Five quintet, with which he played harpsichord) and Jimmy Dorsey. Guarnieri changed positions often in his early career and he doesn’t seem to have had any difficulty in finding new ensembles to work with. In 1943 he left the touring bands and took jobs with a succession of radio studios, while continuing his jazz playing—solo and with combos—in clubs on New York’s “Swing Street” (West 52nd St.). In addition to appearing on various radio shows, he had his own 15-minute programs in 1947 and in 1949-50. Through the 1950s and early 1960s, he appeared on hundreds of radio and TV shows. In addition, he directed and composed shows for army recruitment.

Despite his thriving career in New York, Guarnieri had a driving ambition to compose film scores. Consequently, in 1963, with the encouragement of actor Jack Lemmon, he moved his family to Southern California. His plans did not materialize, though the reasons are not explored beyond a statement that the competition was fierce. Another major disappointment was his failure to attract studio work in Hollywood. Consequently, for the next ten years he played piano in clubs and saloons, at private parties, special concerts, festivals, and the like. In 1972 he stabilized his life somewhat by taking a regular position at the Tail o’ the Cock restaurant, in North Hollywood, where he remained into the 1980s. He played six nights a week, but was allowed to book temporary replacements so that he could perform at special events, some extending several weeks. At the Tail, he acquired a large and regular group of followers, including many prominent figures from Hollywood, entertainment, and music worlds, who marveled at his interpretations, his sparkling technique, and his ability to play stride piano at breathtaking tempos.

Guarnieri told several interviewers of his love of composing and claimed to have composed thousands of pieces, including two concertos and a few other classical works. Appendix 1 lists almost 350 compositions—far less than “thousands”—but still a substantial number. A hundred of Guarnieri’s compositions were either recorded by him or published in print; the rest remain in manuscript. Given this output, the book says surprisingly little about this aspect of his career and has almost no appraisal of the music. A professor of music composition, commenting on the concerto manuscripts, said they “had great melodies but showed lack of compositional training.” To me, that suggests that the concertos fail to provide sufficient motivic manipulation and integration. Another manuscript that is mentioned, but not discussed, is a stage musical titled What a Perfect Business, created with book and lyrics by Martin Silberston. Though the work was copyrighted in 1966 and presumably is available at the Library of Congress, apparently no effort was made to examine it. Guarnieri’s composing efforts remain essentially unexplored and might be a fruitful area for future investigation. Jazz pianist Jim Turner (who had studied with Guarnieri) has occasionally included Guarnieri compositions on his LP and CD recordings, and has one CD devoted entirely to his mentor’s music: Magic Fingers. Jazz Piano Solos by Jim Turner. A Tribute to Johnny Guarnieri (Solo Art SACD-172).

During his career, from 1939 to 1984, Guarnieri made thousands of recordings. The book includes a 68-page discography, which the author acknowledges to be incomplete, despite its extensiveness. The discography culls from other published sources and adds from the personal knowledge of more than two-and-a-half dozen contributors to document Guarnieri’s enormous recorded output. The recordings listed are mostly on commercial discs, but include also radio transcriptions, recordings made for the government, disc clavier recordings, and a few private tapes.

The book concludes with a few short essays by contributors, relating their experiences of listening to Guarnieri, but the one that stands out is an eleven-page appreciation and analysis by Dick Hyman. Hyman’s endorsement is clear: in referring to Guarnieri’s stride playing, he says Guarnieri “realized an unmatched technical facility with the style.” Hyman proceeds to describe and analyze two performances, now available on the Internet. The first is of “Ain’t Misbehavin’,” which highlights both Guarnieri’s amazing technical facility and his ease in playing choruses in different keys, in this case the keys of G, C, F, B flat, and E flat. The performance can be heard at tinyurl.com/GuarnieriMisbehavin.

Hyman’s other discussion is of Guarnieri’s stride version of Chopin’s Minute Waltz. Hyman had heard Guarnieri play it in the 1940s, and the memory stayed with him. Guarnieri never published or recorded the arrangement commercially, but Hyman was able to refresh his recall from a privately-recorded tape supplied by Jim Turner. That tape of Guarneri’s performance is not available to us, but Hyman transcribes the opening 36 measures and Turner’s performance of the complete arrangement can be heard at tinyurl.com/TurnerMinuteWaltz, as well as on Turner’s above-mentioned CD.

While the book gives a good overview of Guarnieri’s career, few books approach perfection, and this one has its share of lapses. For example, while reading of Guarnieri’s activities in 1943, I wondered why—during World War II—he was not in the military. Searching the index for “military” and similar headings yielded no leads, so I paged back to see if I had overlooked something. Eight pages earlier, page 26 reports that Guarnieri’s position with Artie Shaw ended early in 1942 when Shaw enlisted in the navy, and that he then went to the Jimmy Dorsey orchestra, replacing pianist Joe Lippman, who had also enlisted. One would think this might be a place to discuss Guarnieri’s military status, but there is no mention of it. However, on the same page, a caption for a photo of six members of the Guarnieri family (not including Johnny) relates that he had attempted to enlist but was rejected because of poor eyesight. Why place this information in the caption of a picture in which he does not even appear rather than in the narrative?

As for his eyesight, I could not find any earlier place in the book where it had been discussed and, again, the index was of no assistance. Photographs of Guarnieri always show him wearing glasses, but how poor was his eyesight? It is not until 35 pages later, on page 61, that the issue is addressed. According to Guarnieri’s daughter Jaynie, her father was legally blind, with vision of 20/200, corrected to only 20/100 with glasses. Had his vision always been so poor, or was this condition only during his later years? Some of his working positions must have required reading music. Had his poor vision affected this work? Had his poor vision impacted his ability to work as a studio musician?

Such minor shortcomings aside, this is a welcome study of a major jazz musician whose reputation has been inexplicably dimmed. Guarnieri dazzled listeners with his amazing technical facility and stylistic flexibilities. At the very least, this book should create sufficient interest in lovers of piano jazz that they seek out his recordings. Doing so might end the unfortunate situation in which mention of his name provokes the response “Who’s that?”.

Superstride: A Biography and Discography of Johnny Guarnieri
by Derek Coller With an appreciation by Dick Hyman
Jazzology Press; $24.95; jazzology.com 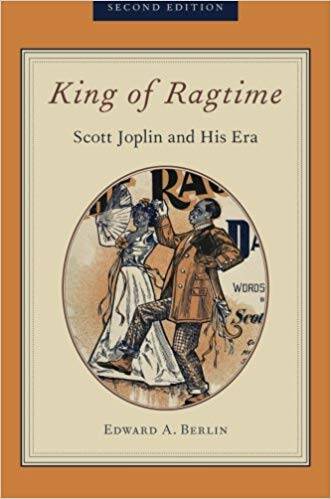