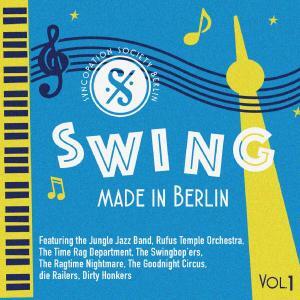 The Syncopation Society of Berlin is a collaboration of jazz and swing artists who even in normal times work to promote and support each other’s efforts. Founded in 2013 it’s not a union or a label but something that serves the functions of both. As in most communities with significant scenes like New York and New Orleans many musicians appear in multiple bands. The Syncopation Society gives these bands a larger platform than they might otherwise have; as they say on their website “a rising tide helps all ships”.

Swing made in Berlin Vol. 1 features twelve different groupings. Some may have been one off collaborations for this album but most are established groups that I recognize including the Rufus Temple Orchestra, The Ragtime Nightmare, The Old Fish Jazz Band, The Jungle Jazz Band, The Goodnight Circus, and the Time Rag Department. Most of them have full albums of their own available or appear regularly at European dance events.

Following the Central European model a band with Rag in the name can be assumed to be a hot jazz band. With only a few exceptions the music on this 13 track album would be classified as hot or sweet twenties style jazz rather than swing, none of it sounds later than the early 30s. I hear a strong overlap with Frog and Henry, a mostly anonymous group I adore that features some of these musicians.

These are some of the hottest young trad groups in central Europe and you owe it to yourself to explore this album. You may discover your next favorite band. The titles include bluesy takes on Morton, sweet songs like “Lullaby of the Leaves” and “Little White Lies”, and twirling hot tunes like “Porto Rico”.

There is similarity enough between the bands that it feels more like a large project than a mix tape, which in a sense it is. These tracks were recorded before lock down and the album itself may have already been planned. Its April release gives it an extra importance to all involved.

The liner notes say, “We bring you a new compilation presenting the vivid scene of our buzzing city. You’ll hear these same very notes around Berlin in the many spots dedicated to jazz and swing.”

Those notes have paused for now but if you want to encourage the passage of one of the hottest scenes in hot jazz over this hump and support dozens of artists in the process reward yourself with this compilation CD.

They have recently made a fun Quarantine Video.