When Mamie Smith recorded “Crazy Blues” for Okeh in 1920, little did she or her Svengali-like manager Perry Bradford have any idea what effect this would have on the recording industry or popular music in general. The astonishing success of this record caused shockwaves in the normally ultra-conservative recording industry – which was still recovering from the popularity of jazz and the apparently insatiable demand for dance records. These two factors combined in the demand for slow or “blues” fox trots, fueled by the success of vocal blues records and booming sheet music sales for “blues” compositions. 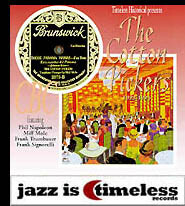 From the spring of 1921 instrumental blues were increasingly featured by recording groups, composed and published mainly by black songwriters but performed by and large by white bands and orchestras. The impact of the blues craze on the recording companies can be gauged by examining the output of the era’s best known jazz group, the Original Dixieland Jazz Band. From their first session in 1917 to the spring of 1921 most of their output comprised of original compositions by members of the band. From the spring of 1921 to their departure from Victor at the end of the year, all of their records were instrumental blues composed by black songwriters.

One by one the recording companies either hired or “created” bands for the sole purpose of recording “blues” numbers, and to add a ring of ethno-authenticity many were given “black” sounding names to convince the record-buying public of their being the genuine article. Gennett had Ladd’s Black Aces, the Plaza group, the Six Black Diamonds, Okeh, the Tampa Blue Jazz Band and Brunswick had the Cotton Pickers. The reasons for the use of white bands to record music which was so rooted in the public’s imagination as being black in origin are not difficult to grasp. Firstly, record company talent scouts and A&R; men in 1922 were exclusively white (with the notable exception of Harry Pace’s Black Swan company, the first major black-owned record company, whose A&R; man was one Fletcher Henderson), and thus would have had little or no contact with or exposure to black musicians. Secondly, record companies ran their businesses in a tight and orderly manner; they liked reliable, known, competent musicians who could sight read in order to produce an acceptable master in the shortest possible time and in the minimum number of takes.

The Cotton Pickers was Brunswick’s chosen generic name for its purveyors of blues fox trots and throughout the 1920s the name was used on a considerable number of issues, even though the range of repertoire broadened and the personnel metamorphosed several times. The anchorman of the first generation to bear the Cotton Pickers name was trumpeter Phil Napoleon, a legitimately trained musician with a powerful, clean (if at times unadventurous) style, and who was well known to recording executives through his work for bandleader Sam Lanin and with the Original Memphis Five.

Contrary to published discographies, this writer believes that the personnel of the first two sides under this name, rather than being an augmented Original Memphis Five, was in fact made under the direction of Bennie Kreuger. Kreuger was one of the best known saxophonists of the day and his orchestra was a big seller on Brunswick – he also freelanced with the Brunswick house band and it is reasonable to assume that he would be a prime candidate to approach to supply a scaled-down group to record instrumental blues numbers. For the first session Kreuger hired the Original Memphis Five’s Phil Napoleon (who occasionally recorded with Kreuger’s band) and trombonist Miff Mole, possibly with the group’s pianist Frank Signorelli, to which he added his regular sidemen banjoist Bill Arenburg, tuba player John Helleberg and drummer Willie Farberman. Although Kreuger is best known as a saxophonist, he occasionally played clarinet, and the thin tone and low register slap tonguing on Hot Lips is entirely consistent with known examples of his clarinet style on other recordings.

For the following session the full Original Memphis Five was used, augmented by Cali and Helleberg. The sound is immediately more cohesive than on the previous session, aided in no small part by the two handed piano playing of Frank Signorelli and Jack Roth’s drumming. Kreuger’s replacement on clarinet, Jimmy Lytell, is in a different league. Like Napoleon and Signorelli, Lytell had worked with the Original Dixieland Jazz Band, replacing Larry Shields, and much of Shields’ concepts and style had rubbed off on the youngster. Lytell however gradually developed his own style, marked by a purity of tone and a warmth in the chalumeau register, free of the yelps and cackling which bedevilled many early jazz clarinetists.

The trombonist on this and several other Cotton Pickers sessions was Irving Milfred “Miff” Mole and although only 23 years old, was already the acknowledged leading jazz performer on the instrument. His assuredness and astonishing technique which had taken the trombone from an almost comedic role in many early jazz bands to a fluent solo voice shines through on many Cotton Pickers sides. His replacement with the Original Memphis Five and thus with the Cotton Pickers was Charles Panelli, whose recording debut in 1918 with the Louisiana Five was hardly inspiring – long glissandos and a general stiffness and lack of harmonic invention. What happened to him between 1920 and 1923 is uncertain, but when he reappears on record in 1923 we find a confident, relaxed and technically brilliant player, capable of holding his own with any of his contemporaries, even the mighty Mole. In fact at times it is virtually impossible to differentiate between his and Mole’s playing.

Over the ensuing two years this group recorded a considerable number of sides for Brunswick, and as the “blues” craze ran its course their repertoire broadened. The inclusion of more popular melodies such as “Way Down Yonder In New Orleans” and novelty numbers such as The Duck’s Quack shows a shift in the record market, as does the addition of vocalists to several sides. From this period comes “Walk, Jenny, Walk“, memorable for the remarkable drum solo by Jack Roth, first on woodblock followed by a tightly choked cymbal, played at great speed and with remarkable precision and dexterity. Also noteworthy from this period are the last two tracks by the augmented Original Memphis Five, “Do Yo’ Duty Daddy“, a delightfully relaxed workout of a Ted Fiorito composition and “Blue Rose“.

With “Blue Rose” the Cotton Pickers name disappeared from the Brunswick catalogue for over a year. The reasons for this are uncertain, but it is no coincidence that the “blues” craze, particularly as a dance step had petered out, to be replaced by the much more frenetic Charleston. The demand for records by small jazz groups however did not decline, as testified by the scores of sides recorded by the Original Memphis Five, the Original Indiana Five, the New Orleans Jazz Band and others.

Brunswick also had a new star band (Ray Miller and his Orchestra), which had usurped those of Bennie Kreuger and Isham Jones as its leading orchestra – the star-studded aggregation led by drummer Ray Miller. Miller had been leading his own band in New York since 1918 and held a fairly consistent, if musically unadventurous personnel over the years. However in 1924 he was offered a long residency at New York’s Arcadia Ballroom, and with a virtually blank chequebook busily set about hiring the cream of the younger, “modern” talent available. These included Miff Mole, virtuoso reedman Andy Sanella, pianist Rube Bloom and the sax star of the Benson Orchestra of Chicago, Frank Trumbauer. Miller was also requested by Brunswick to supply a scaled-down band to record “hot” numbers, and thus the Cotton Pickers name was resurrected for its third incarnation.

Stylistically, the 1924-1925 Cotton Pickers sides are poles apart from the earlier Original Memphis Five – based recordings; the latter were lineally descended from the Original Dixieland Jazz Band whereas the likes of Mole and Trumbauer had pushed forward the rhythmic and harmonic boundaries far beyond the New Orleans polyphony of the early groups. Bix Beiderbecke and the Wolverine Orchestra had hit New York a few months earlier, and his advanced musical thinking and “cool” style was already making its presence felt.

The repertoire of these “Miller” Cotton Pickers shows a clean break from the predominantly black composer/publisher base of the earlier sides; they are for the mostpart up-tempo renditions compositions by white, non-Tin Pan Alley composers. The writers were mainly Chicago-based bandleaders; Elmer Schoebel, Charley Straight, Albert Short and Fred Rose, or mid-westerners published by the Melrose Brothers in Chicago, such as Charlie Davis.

As for the records themselves Trumbauer steals the show on nearly all the tracks with his thrusting, confident C-melody sax. Mole’s staccato, facile trombone is a perfect foil to Tram, and trumpeter Roy Johnson, free from the confines of the big band is inspired by the august company – his introductory fanfare on “Down And Out Blues” is both powerful and confident. This latter track was issued in Britain in 1926 with the label bearing the legend “Trombone Passage by Miff Mole”, which must have meant absolutely nothing to British record buyers!

The Cotton Pickers continued recording for Brunswick throughout 1925, beyond the confines of this CD and using the newly-introduced electrical recording process. Whereas most companies licensed the Western Electric system, Brunswick commenced with its own “Light Ray” system, which produced a thin, distorted parody of sound. The acoustic system employed by Brunswick was of the highest order, as the tracks on this CD show, producing a full, clear, well-balanced sound. Even the bass drum can be occasionally discerned.

Despite their being a product of a record company eager to cash in on a musical fad, the Cotton Pickers have endured over the years, being eagerly sought after by fans of 1920s white New York jazz. Their appeal is self – evident – outstanding musicianship, a feel for the repertoire and a sincerity in their approach which transcends their time. For the seasoned collector this CD is an opportunity to re-evaluate a neglected group, for the newcomer a golden opportunity to discover the early developments of New York jazz encapsulated on one CD.

Thanks to James Gallup, Scott and Mark of Vintage Music Company for supplying some songs that aren’t on the Timeless CD for this page. [Note the recordings linked below are not from the CD.]