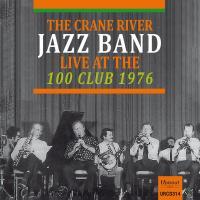 The legendary Crane River Jazz Band was one of the earliest bands in the Traditional Jazz Revival in the U.K. that began in the late 1940s. The band was formed in 1949 and lasted until about 1957, having undergone several changes in personnel in the meantime. In 1972 there was a reunion of the Crane River Jazz Band, and it is a recording of that occasion which is featured on this CD, the line up including a half dozen of the original personnel.

The contents of this CD were issued originally on Dine-a-Mite Jazz DJCD-004, same title as here. It is good to have it available again as it contains some stimulating jazz, as we might expect from such a stellar group of musicians. They do not try to recreate the sound of the original band, as far as I can determine, when all were comparative youngsters, but rather show in their playing the effects of maturity on both content and expression. As with the original Cranes, they place an emphasis on ensemble work, rather than solos.

Freed from the tyranny of the 78, they can all relax and take as much time as needed to say what they have to say. Thus we find three tracks exceeding ten minutes in duration. One of them in particular, “Canal Street Blues,” although taken at a slower than usual tempo, swings all the way through. It builds as it goes, and there is a gradual heightening of tension as the band moves into the coda—not increasing the volume, but increasing the drive—the whole resolving in a satisfying ritard.

John R.T. Davies played trombone in the early Crane days, but here he plays reeds, other than reverting to trombone on “Trombonium,” a seldom heard tune today. The ensemble takes it throughout, led by Davies, except for a solo by piano about three quarters of the way through, and we are treated to a bravura trombone performance, Davies executing the many breaks flawlessly.

All of the tracks with the exception, perhaps, of “Trombonium,” will be quite familiar. However, here, given a Cranes stamp and led by the indefatigable , Ken Colyer they get a fresh presentation and most of them swing.

What could have been unmitigated pleasure is impinged on a little, however, by the quality of the sound. In his liner notes Robert Greenwood tells us that his “parents bought [him] the Philips radio/cassette player used to record the music on this CD,” so it s less than hi-fi. There is little separation of the instruments, resulting in some muddiness on some tracks, and Bowden, not the quietest of drummers, is a bit over-recorded here and there, resulting in a booming bass drum. Colyer’s two vocals, by contrast, are quite under-recorded and are really unintelligible. Unfortunately, modern audio technology was not up to the task of remedying these deficiencies. However, given that caveat, this CD is well worth the having by anyone who likes lively, well-executed traditional jazz. For Colyer and Crane River Jazz Band completists, it is an essential acquisition.