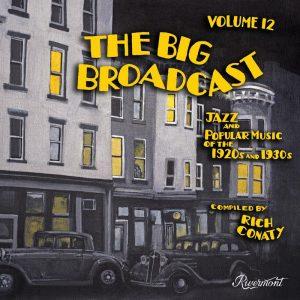 For 42 years Rich Conaty, who passed away near the end of 2016, delighted in playing rare recordings from the 1920s and ‘30s on his radio show, The Big Broadcast. In addition to his expertise, his enthusiasm won over a countless number of listeners. On an annual basis during the past dozen years, he also compiled a CD of gems for the Rivermont label that was released in his The Big Broadcast series.

Conaty had planned Volume 12 before his passing seemed to put an end to the series. Fortunately Rivermont and many of his colleagues and friends pitched in to supply the recordings and write the typically extensive liner notes, including the Syncopated Times’ own Andy Senior who wrote about Jimmy Joy’s “I Got Worry.”

As was the practice in this series, The Big Broadcast Vol. 12 has 25 recordings (from 1923-36) programmed in chronological order plus a previously unissued closing broadcast performance which in this case is George Olsen’s band in 1932 performing “You’re Telling Me.” Overall, the music includes jazz and pop singers, hot jazz combos, big bands, some sweet music, rarities, and a few slightly more common but underrated performances.

It is doubtful that even the most devoted record collector has more than a handful of these performances, and they certainly would not have owned the informative and colorful liner notes included in the 40-page booklet. Although it is sad that this very valuable series has come to its conclusion, it is great that Rich Conaty’s friends were able to put out Vol. 12. He would have loved this set.