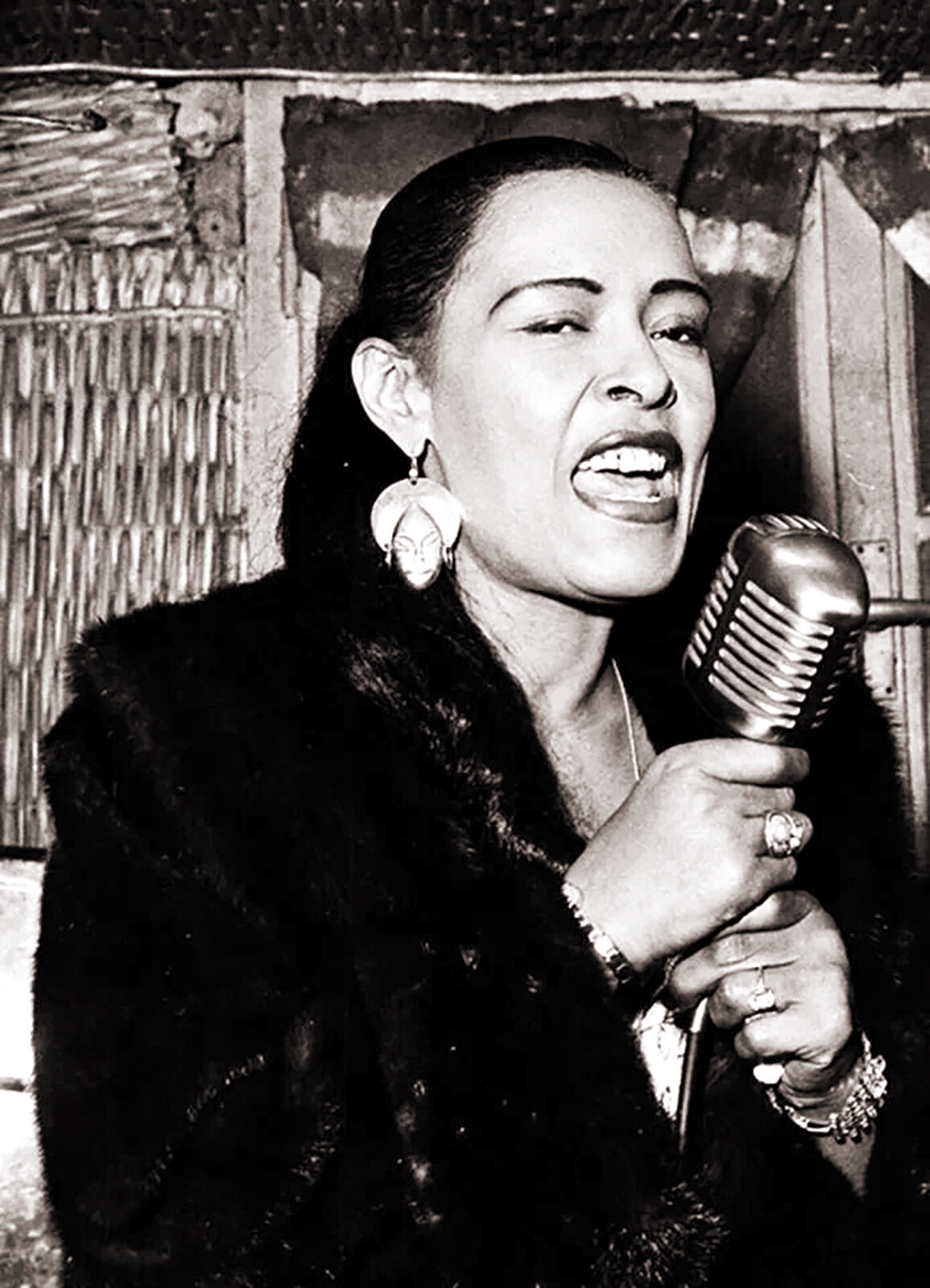 Billie Holiday (Eleanora Fagan, 1915-1959) emerged as a fully formed artist in the 1940s, her voice was its richest and most expressive.  She imparted unprecedented emotional depth to ballads, blues, torch songs and her own striking originals.

This profile of Billie Holiday recaps the basic outline of her story in three chapters covering the 1930s, 1940s and 1950s. Holiday is quoted from interviews and her famed autobiography, Lady Sings the Blues. This is also a photo essay presenting her constantly shifting visage. See: The Real Billie Holiday, Part One – 1930s, part three will run in April.

An Artist in Full

The 1940s was a decade of growth and transformation for Holiday. She turned decisively from ephemeral popular and Tin Pan Alley songs to broader emotional landscapes. But her chaotic personal life was complicated by addiction to heroin, doing prison time before the decade was over. 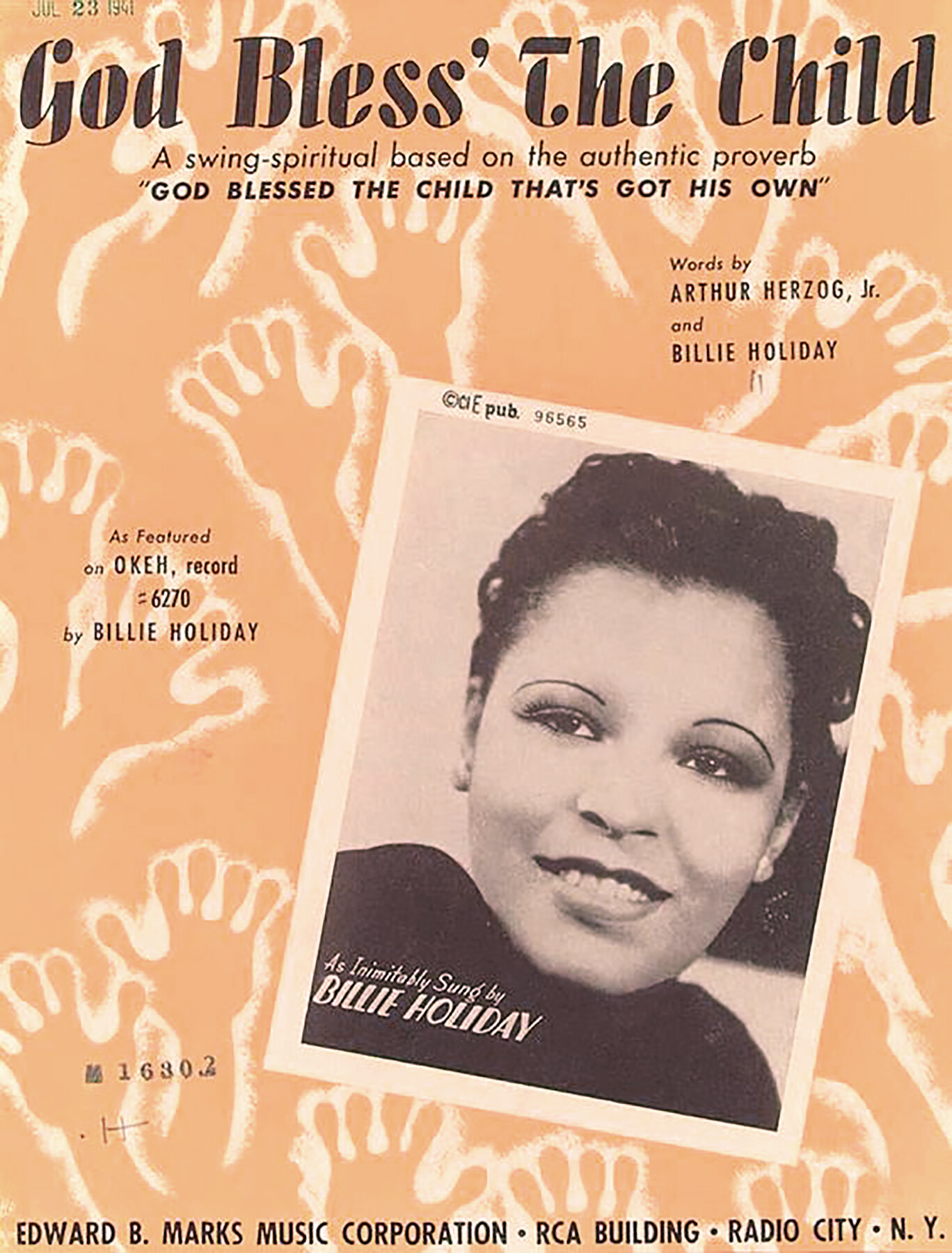 Billie became recognized on her own terms as a singer-songwriter, composing songs that were moving statements of love and loss that have stood the test of time. Her original, “God Bless the Child” (1941) became a durable standard. In “Gloomy Sunday” (1942) she addressed suicide frankly.

“Strange Fruit” (1939) directly confronted the horror of Southern lynching. A genuine political protest song, it forcefully confronted Northern white audiences with the unspeakable brutality of lynching in the Southern States remaining one of the most powerful artistic salvos against racist violence in any medium.

Singing it at Cafe Society in New York City nightly during 1939, Holiday usually shed tears, a heart-rending nightly ritual. It was bitter personal cry against the racism and exploitation she faced all her life, becoming her signature and a cause celebre.

Much has been written and said about the song, most definitively by David Margolick in Strange Fruit: The Biography of a Song (Ecco Press, 2001).

Margolick explains that “Strange Fruit” was NOT written by Billie as she claimed. But by political activist Abel Meeropole (1903-1986).  Though Holiday made it famous and memorable, he’s been largely forgotten.

Meeorpole said, “I wrote ‘Strange Fruit’ because I hate lynching and I hate injustice and I hate the people who perpetuate it.” A Jewish New York City schoolteacher and closet communist, he wrote hundreds of poems, plays and22 songs under the pseudonym, Lewis Allen. Admired by composers George Gershwin and Kurt Weill, his other work was unsuccessful.

Issuing “Strange Fruit” on disc was challenging for Billie. Columbia Records refused to let Holiday record the controversial song.  To put it out she signed with the independent Commodore label. A significant watershed it marks her emergence as an independent artist. It became one of her best-selling records.

Holiday did not like riding in trains — hated them. But she loved flying. She loved soul food: beans and rice, cooked greens, ham hocks and down-home cookery. For instance, she claimed that while touring England:

“I got so tired of fancy hotel food, one night I took out a little can of red beans that I’d carried all the way over there with me. I got me some garlic, some hamburger meat. I took out a can of Sterno and started cooking up a batch of red beans the way I like them.”

Sadly, by the late 1940s Billie’s illegal drug use – marijuana and opium in the early days, heroin later on — got her into serious trouble with the law. As result of more than one high-profile arrest she spent about a year in prison during 1947-48.

Holiday also suffered from poor choice of male companions.  This is well known, described in biographies and addressed frankly in her memoir.  Undoubtedly, this was one source of the pain heard in her saddest songs.

Despite sad events, she triumphed during the Forties achieving international stardom33. She concertized at Carnegie Hall to great acclaim. Co-starring with Louis Armstrong in the 1947 motion picture “New Orleans,” they made fun records together.

Toward the late 1940s, Holiday’s life entered a downward spiral.  Her career was seriously jeopardized by the felony narcotics conviction.

The resulting suspension of her New York City Cabaret license effectively banned her from performing in New York City, sharply reducing her income. The death of her mother was yet another harsh blow.

Her physical decline was audible and visible as her voice began to falter.  Even her old friend and flame Buck Clayton noted the changes writing, “Gradually she became very thin, gone was the plump girlish Billie that I first met.”

As the 1950s dawned, there was continuing demand for her singing. Billie Holiday recorded frequently, broadcast on radio, appeared on television and toured overseas.  Despite all her troubles she was a tough survivor, living legend and still the best damn jazz singer around.

In the 1950s her iconic status grew. Her autobiography was published. But her chaotic personal life and notoriety as a convicted drug addict continued to jeopardize the career of Billie Holiday, as depicted in part three.

I Cover the Waterfront, The Man I Love, Keeps on Rainin’, Don’t Explain, Tenderly

The History Behind “The United States vs. Billie Holiday” 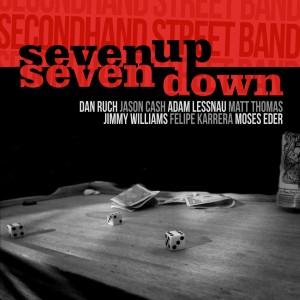 Seven Up Seven Down by Secondhand Street Band 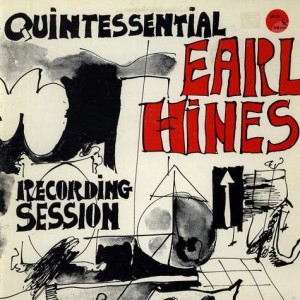 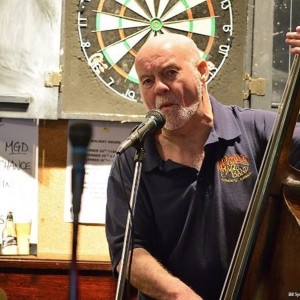 Chris Daniels, founder of the Climax Jazz Band, has died at 84 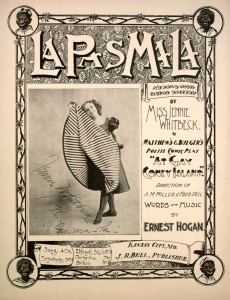 The Rudiments of Ragtime: Early Ragtime 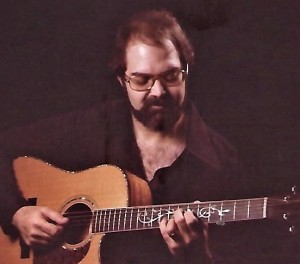