The Rise and Fall of J. Fred Helf

In the first decade of the 20th century, few composers were as prolific and J. Fred Helf. Not many remember him now, but for decades he was a well known and beloved songwriter. He wrote many popular songs that were later used in films and in musicals. These hits earned a seemingly endless amount of royalties, but very little of that money went to him in his own lifetime, as he died at age 44. He may have written many sappy Victorian style love songs, but behind the notes there was a very interesting and likely troubled writer.

Born in Kentucky in 1871, he grew up with folk music around him. His father was a general laborer, fresh off the boat from Germany like his wife. According to a period article, J. Fred got his start as a door boy for a local theater in Cincinnati, eventually becoming a performer there. He proved to be a talented on stage—and even better as a lyricist. He finally teamed up with E. P. Moran in 1896 and in 1897 they published their first song, “It Ain’t No Lie.”

This was the hit that got them going in the business. Helf and Moran soon became famous in the Cincinnati area for their ragtime songs, which at the time was a major hub for the music. Big minstrel stars were performing their hit, such as Lew Dockstader, whose image was featured on a few later editions of the sheet.

In early 1899, he decided to take his act with Moran back east. At first it was a big flop, but soon he came up with a song that ended up rocketing them to the spotlight of New York composers. Helf later recalled that one time, just before they had moved to New York, he and Moran were staying in a hotel while touring in Ohio, Helf was becoming annoyed by the boy peddling ice in the hallways. He kept coming around with the buckets, and the next time he came around Moran opened the door and told the boy to quit it—to that Helf replied, “How’d you like to be the iceman?” And from there the hit was born. This was the tune that everyone came to know him for; it was not only performed all over, but recorded countless times.

Soon other publishers were mobbing him for more hits. He claimed years later that this hit him faster than he could have ever expected. In only a few years he went from a stagehand in a small theater to a first class New York songwriter. It would seem odd that the publisher who caught his attention next was Fred Hylands. Hylands, being from the Cincinnati area, felt he had some kind of kinship with Helf, and befriended him quickly. Helf later stated that at this time he was still impressionable and green, not knowing how difficult and slimy the publishing business was. Soon everything would hit him like a ton of bricks.

Hylands’ major success with Helf was “A Picture No Artist Can Paint,” which solidified his reputation as a sentimental songwriter. This publication also introduced him into the wild world of the phonograph. Around that time he partnered on stage with recording artist George Alexander, and Fred Hylands introduced him to all the strange young folks within the Columbia lab. In the coming years his friendship with phonograph folks would serve him well.

In 1900, he ran into a legal battle with Hylands, and also his wife at the time (who has yet to be named). The March 10th 1900 issue of the New York Telegraph stated thus:

Song writers, too, have their troubles…All the world has yet to know that at the fashionable hour of high noon yesterday Mr. J. Fred Helf, the immortal author of “A Picture No Artist Can Paint” and other lyrics, was sued in Cincinnati for divorce. At about the same fashionable hour Mr. Helf was consulting his attorneys in reference to a claim for disputed royalties, in which the music publishing firm of Hylands, Spencer & Yeager, 33 West Twenty-seventh Street, figure as the defendants.

“My trouble with this publishing concern,” said Mr. Helf, “is a warning to all song writers. Last year I wrote my latest terrific popular success, entitled, ‘A Picture No Artist Can Paint.’ It was published by Messrs. Hylands. Spencer & Yeager, and up to Jan. 1 I received my royalties all right. Then the concern refused to turn over any more money, alleging that a former partner of mine in vaudeville—Mr.[E. P.] Moran—had put in a claim for half the royalties as a part composer and owner of the song in question. As a matter of fact, I am the sole author and owner. My attorney has the matter in hand, and the concern has promised to settle the affair amicably by Monday next. It is a mystery to me just why my royalties were held up.”

Hylands, in 1900, was losing money as a publisher, so it shouldn’t come as a surprise that he was having troubles with paying Helf his royalties. Moran was getting back at Helf, as it seems they had some sort of falling out between 1899 and 1900. Later the article quoted Len Spencer as saying “Mr. Moran, it seems is a performer and an ex-partner of Mr. Helf.”

Spencer and Hylands were apparently caught off guard by this. It is uncertain what exactly became of this matter, as not long afterward, Hylands was forced to sell out all his stock, including the copyright to the Helf piece.

Not long after tangling with Hylands, he teamed up with Will Heelan, and with him wrote a few songs that further cemented his reputation, and since he had recently acquainted himself with the phonograph community, his songs were being recorded more than ever. Nearly every label was recording his songs. His next job was working for publisher Sol Bloom.

In 1903 a large full page ad was published in the New York Telegraph, listing Heelan and Helf as their top songwriters and office hands. It was here that he likely met Fred Hager for the first time (or maybe again, as Hager had worked for Columbia in the previous years). Hager got his mega hit “Laughing Water” published by Bloom that same year, and Helf took note of how quickly Hager’s piece sold so many copies. At this time, Hager was feeling dissatisfied with Zon-O-Phone (whom he had worked for since 1900), and was looking for ways out. For months Helf and Hager pondered a business venture to get them both out of the compromising places they were in.

At the end of 1904, Victor finally bought Zon-O-Phone, and that meant the end of Hager’s grip on power there. With that, he almost left, still taking on the job of the band and orchestra leader for a little while longer. Helf left Bloom and moved into the same building as Hager’s first short-lived publishing firm with Justin Ring. Throughout 1904, Ring and Hager published as Ring publishing company, right in the middle of 28th street (Tin Pan Alley). Helf and Hager moved in in February of 1905, putting Ring in a compromising position, as he continued to work for them, but things were beginning to sour between him and Hager.

After their first few publications, “Mamma’s Boy” and “Everybody Works but Father” among others, their popularity exploded much as it had for Helf back in 1899 and 1900. Famous minstrel Lew Dockstader was really the cause of their early success, making sure to perform and promote Helf and Hager’s songs at nearly every show. Soon all the other publishers were sending their top writers to have a chance at Helf and Hager. While all this was happening in 1905, Justin Ring was still stuck in the same building as them writing and arranging songs, feeling bitter about his namesake firm becoming part of his old flame’s firm. By the end of 1905, Ring finally left, though his popular slow drag “Jovial Joe” (originally published by Ring and Hager) continued to be advertised on their sheets.

In 1906 Hager finally left Zon-O-Phone for good. It was big news when this happened, as he had become associated with the company and his orchestra for nearly a decade. He was now the chief advertisement creator and secretary for Helf. Hager’s creativity and unusual sense of wit comes through very well in the dozens of ads that were published for Helf in all the major pop culture papers of the time. Hager’s advertising ploys were strange, but seemed to work, as they were everywhere:

IS STEALING A CRIME??? – YES. THEN WE PLEAD GUILTY! THEY WERE ALL WATCHING US

AN HONEST CONFESSION IS GOOD FOR THE SOUL WE PLEAD GUILTY– WE PUBLISH GOOD SONGS—AS A GOOD JUDGE OF GOOD SONGS, HEAR THEM AND JUDGE FOR YOURSELF

He even made up very complicated and strange riddles for readers to try and solve for prizes.

Helf was living easy, writing easy songs with little effort, having Hager do much of the dirty work that went along with being a major Tin Pan Alley publisher of the time. The hits kept coming, and as his success continued, he likely dove into the habits of the ragtime life, drugs and alcohol. Helf always looked as though he had some habits, always looking gaunt, but somehow always keeping a big smile and keeping things together. Soon these types of habits would catch up with him.

By 1909, things were still going strong, but he and Hager had a fire scare that year. They lost a little bit of their stock, but nothing was majorly damaged. Paranoid, he and Hager moved to Broadway to a new location, closer to a lot of the big theaters. The relief wouldn’t last long however, as the next year, the building burned to the ground. Helf was in shock, but ever the optimist, he was able to pick himself back up and start over with the help of generous donors. Hager however, was devastated, and promised he’d never return. He picked up and left for Boston for the Phono-Cut label, but Hager didn’t just leave with all his stuff. 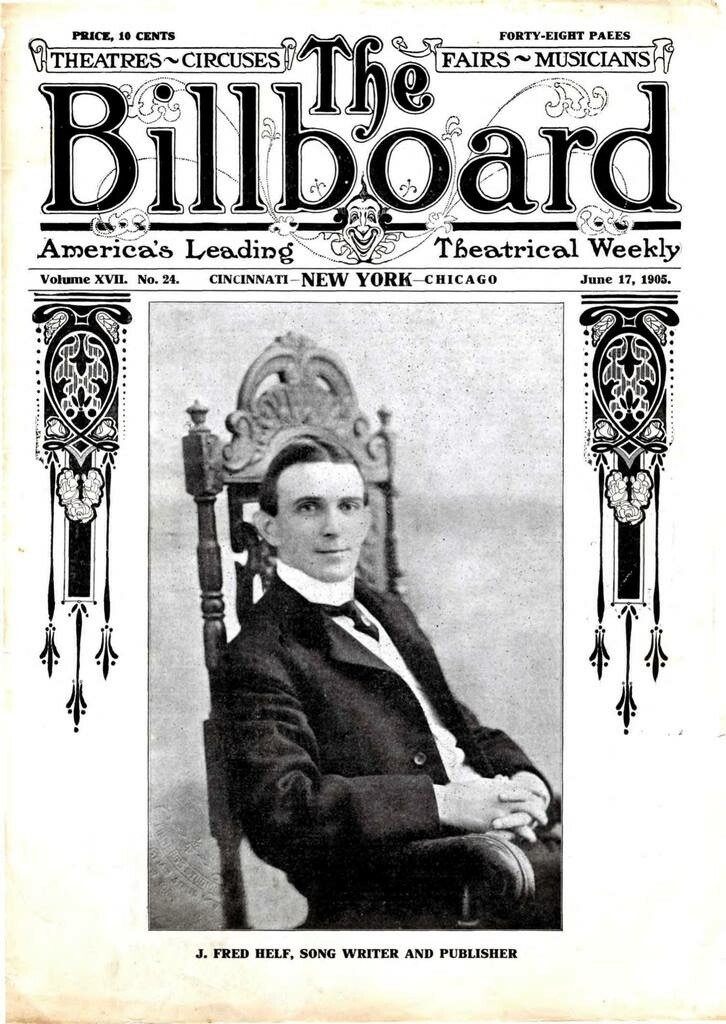 restarted his publishing firm from scratch, and it seemed that he was back to normal by the end of 1910, with his new huge hit “Play that Barbershop Chord” (popularized by Bert Williams). Helf remained diligent in keeping his assets together and the firm going. By 1912, things were starting to crumble, as he was frequently unwell, and this kept him from working as often. He had so many other ideas and plans, such as jumping into the then blossoming film industry, but this never came about.

In 1914 he dropped out of the business, only getting a few things published here and there by other firms, as his condition was getting worse. In late 1915, he went in for an operation to remove a tumor, but as was so common back then, he didn’t survive the procedure. He was only 44 when he died, and it shook up the publishing world, with his obituary scattered all over every paper you could think of. He may have died, but Fred Hager got all the rights to his songs after then. Even as late as the 1950s Hager was picking up royalties for the songs he and Helf had published nearly half a century before.