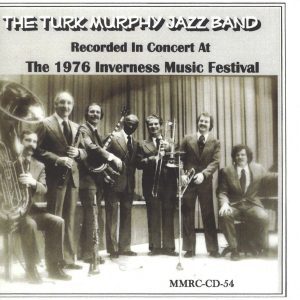 Turk Murphy (1915-1987) was one of the giants of jazz in the San Francisco area, beginning with his tenure in the Lu Watters Yerba Buena Jazz Band and continuing with his own band in the late 1940’s through the years that followed until the time of this festival recording and, of course, beyond.

The disc opens with the festival chairman introducing the band, and then Leon Oakley leaps out front leading the band into a powerful rendition of “Struttin’ with Some Barbecue,” setting the tenor for the rest of the concert. In his liner notes Vince Saunders alludes to Oakley’s reverence for Louis Armstrong, and no clearer evidence of it could be found than his breaks on this tune, his phrasing, his nonpareil half-valve technique, and throughout ensemble passages his bending notes in all registers. Whether playing his horn open or muted, he does not let up on any tune and drives the ensemble. Anyone who was dozing off before the band started had to be up and alert well before they finished this first number

And so it continues throughout the rest of the concert. Murphy always seemed fortunate in his choice of sidemen, this band being no exception, all of the men having been with him for some ten or more years at this time. Helm was long an associate of Murphy in the YBJB, and they dovetail well, as in “Buddy’s Habit,” for example, and in their vocals on “Fifty Miles of Elbow Room.” Clute joined Murphy in the mid fifties on piano, and like Wally Rose of the YBJB he was a ragtime enthusiast and accordingly was featured in many solos or small segments of the band, as on “Easy Winners” on this program, Murphy turning to washboard and, along with tuba and banjo, accompanying Clute.

Murphy was always generous with the spotlight, allowing it to fall on each member of the band during performances. It is often the case with other bands that one doesn’t hear much from a rhythm section, the front line being given all the attention, but this is not so here. Bill Carroll is featured on tuba on “See See Rider” and again on trombone in a duet with Murphy on “Bull Trombone,” and Carl Lunsford on banjo on “Gone Daddy Blues.” Clute, of course, takes frequent solos but is also given center stage with the ragtime pieces, such as “Easy Winners,” mentioned above, and “The Cascades.” Murphy himself takes center stage on his own composition “I Am Pecan Pete,” playing it flawlessly and at an absolutely blistering tempo. Oakley, of course, is always to the fore as the lead instrument, and it is a joy to listen to him as he explores the tunes.

Also enjoying some exposure on this concert was the vocalist Jimmie Stanislaus, vocalist with Murphy for about a decade. Murphy, to my knowledge, did not carry any other dedicated vocalist as a band member, being content to allow the side men to vocalize, occasionally taking one himself. On numerous occasions he had Pat Yankee sing with the group. (There is also the story of how Murphy refused to allow Janis Joplin, before she became a big rock star, to sit in for a couple of numbers at Earthquake McGoon’s. I have heard some of her blues singing from that period, and she wasn’t a bad blues singer.) Mercifully Stanislaus does not feel the need to imitate Louis Armstrong on every song he sings, and his “signature” piece, “Yama Yama Man,” is included in this disc’s play list. It is a song which he loved to direct toward any children in the audience.

All in all this is a fine, hitherto unreleased, performance by the band, displaying just how polished and disciplined it was. It surely was one of the best groups Murphy led, possibly the best.