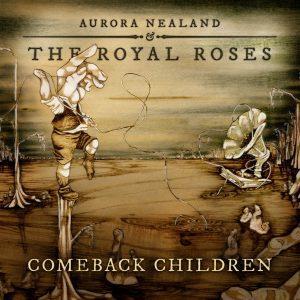 Aurora Nealand is an artist with a creative sensibility that she duly brings to her music. Her parents exposed her to the music of the Preservation Hall Jazz Band, though she didn’t turn her focus to traditional jazz until serendipity set her down in New Orleans. There the city, and traditional jazz, took hold. She had studied electronic and classical composition at the Oberlin Conservatory before training for physical theater at the Jacques Lecoq school in Paris. She assumed her future would hold a Master’s degree in composition, but the experience of being in New Orleans shifted her focus to playing music.

She can now be found with The Royal Roses at both a weekly night in New Orleans and increasingly at events around the country, playing remarkable traditional jazz. She’s also fulfilled a longtime ambition to create a performance and music act called The Monocle, played in a spoofy Rockabilly band, done a number of other performance art musical projects, excepted residencies, and taught at the Welbourne Traditional Jazz Camp.

As a name that is starting to be noticed in the art world, she still finds time most weeks to duet with Tom McDermott complimenting his piano with her Sidney Bechet-inspired reed work and expressive vocals. I’d recommend finding videos of these duets. The sparsity and demands of these intimate performances keep her voice in top shape and give her space to develop her playing.

This is the third release from the Aurora Nealand and the Royal Roses, after a live tribute to Sidney Bechet recorded at Preservation Hall in 2010 and The LookBack Transmission in 2014. The second album was a creative and engaging slide through the sounds of New Orleans. Their third album takes it to a new level.

From the opening cacophony of “Jump for Joy,” it’s clear that Comeback Children is a work of art. Its creators, led by Aurora Nealand are artists committed to making a statement within the genre of traditional jazz. That opening lets you know you’re in for something special; the jam on the second track, a six minute “Joshua Fit the Battle of Jericho,” lets you know it will also be a put-on-your-seat- belts experience. A treatment of Duke Ellington’s “Old Man Blues” then sets the bar for the remainder of 17 tracks.

The album has Chamber Jazz moments, the sparse “Indian Summer” falls into that category, but there is nothing stuffy going on here. Their treatments of “Minor Drag” and “Limehouse Blues” have real building heat.

You can find video of them performing “Toploulou” live. It is a West Indian song, and Nealand sings it in French; on her previous album, she also sang several songs in French. It’s a useful second language in the Crescent City. Four tracks also feature male lead vocals, each from a different band member. All those voice changes add a theatrical feeling.

Matt Perrine, sousaphone and Matt Bell, guitar, provided some arrangements for the band. Those make for the most creative tracks, and most impressive. “Flee as a Bird,” arranged by Perrine, mirrors the traditional New Orleans dirge-to-romp structure but with much more interchange, fluidity, and drums. “Since My Best Gal Turned Me Down,” also arranged by Perrine, kicks in with a New Orleans street beat, then packs a string of joyful surprises.

The lineup switches up track to track as recording took place across several days. Nothing but worthy collaborators were found. Bass is sometimes Nathan Lambertson and on other tracks Joshua Gouzy; Benji Bohannon is sometimes on drums, at other times Paul Thibodeaux. Matt Dillon has played vibes for all genres of national musical acts, as indeed has Perrine been on call wherever a sousaphone was needed. James Evans supplements Nealand herself on reeds. Charlie Halloran, trombone, guests on one track. David Boswell, trumpet, and Jon Rahm, trombone, play throughout. Google any of these names and you will be suitably impressed. Nealand deserves all the attention she’s getting. At 76 minutes, Comeback Children clocks in as an event.

This review is from a larger Women Take The Lead column.

Nights at the Turntable November 2020

The Trombone Eloquence of Bill Bardin, Part 1: Brushes with Greatness, 1940-65

A Summit In Paris

Off the Beaten Tracks November 2020

The Saga of Brun Campbell Challenged

Brun Campbell: Notes on his Early Life and Unknown Pictures