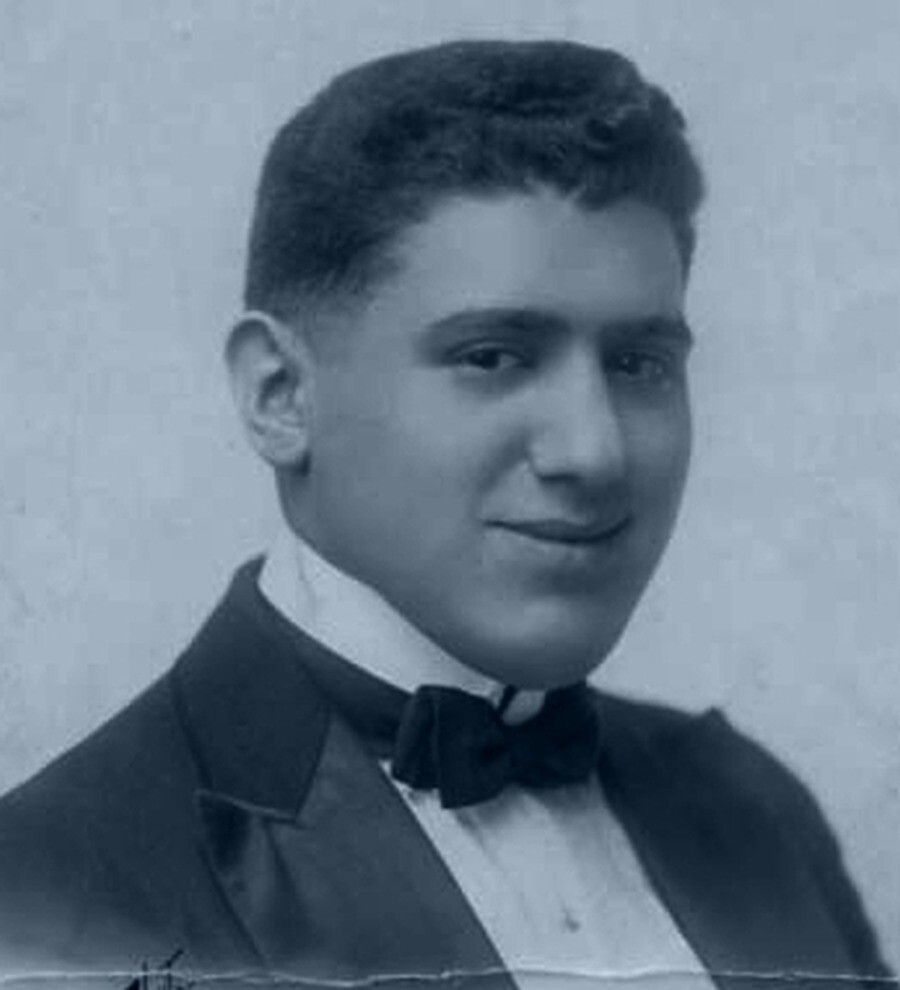 Originally a violinist, Ben Selvin (March 5, 1898 – July 15, 1980) probably made more records than any other bandleader of the 78 rpm era, his career in the record industry spanning decades. He may be best known among record collectors not for specific recordings but for quantity. Articles on page 145 of the January 1924 issue of Talking Machine World and page 86 of the January 1924 issue of Metronome celebrated Selvin’s 1,000th record–this was early in Selvin’s career. The articles, evidently based on the same press release prepared by Selvin himself, state that the musician was “twenty-five years of age.” Page 67 of the February 1925 issue of Metronome states that Selvin “recently made his 1200th phonograph record.” He remained important in the record industry for decades, even becoming a vice president of Columbia during the heyday of Frank Sinatra, Dinah Shore, Doris Day and Buddy Clark. Later he was an A & R man for RCA, overseeing the popular RCA Camden series of reissued material until forced to retire at age 65. 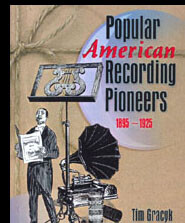 He was born around 1898 to Russian immigrants. His father, Max, was a tailor. Page 34d of the September 1927 issue of Talking Machine World gives this background information: “Ben Selvin, a native of New York, started fiddling at the age of seven. He made his first public appearance at the Star Casino at the age of nine. Acclaimed a prodigy, and presented with a gold medal in recognition of his genius, it was planned to send him to Paris for further study. Reverses prevented, but Ben was determined to succeed, so he kept on working in and around New York. In 1913 Mr. Selvin made his first appearance on Broadway. From there he went to Rector’s, then to Reisenweber’s and Healy’s. When nineteen years old, Ben Selvin organized his own orchestra and played at the Moulin Rouge for Broadway’s record orchestral run–a run of seven years.” Page 86 of the January 1924 issue of Metronome states, “In 1922 he was assigned to the newly created Broadway, which, with an augmented orchestra, he took by storm. Soon his popular aggregation was transferred to the ‘Pavilion Royal,’ where more admirers were won.”

Victor’s November 1919 supplement credits Benjamin B. Selvin for arranging the two numbers on Victor 18614 performed by Selvin’s Novelty Orchestra, “Mandy” and “Novelty One-Step.” Soon afterwards came his best-selling record, “Dardanella,” with lyrics by Fred Fisher, music by Johnny Black and Felix Bernard. This was cut by Selvin’s Novelty Orchestra for Victor 18633 on November 20, 1919, and issued in February 1920.

The June 1921 issue of Talking Machine World announced that Selvin’s Novelty Orchestra, engaged at the time at the Moulin Rouge in New York City, “signed up exclusively for the making of Vocalion records.” (Curiously, Brunswick and other companies continued to issue discs of Selvin’s Orchestra.) The September 1922 issue of the trade journal announced that Selvin would continue to be exclusive to the Vocalion label, and page 143 of the September 1923 issue of Talking Machine World announced that Selvin again signed to be an exclusive Vocalion artist, adding, “Although only twenty- eight years old he not only directs the Selvin Orchestra at the Moulin Rouge, New York, but he directs and manages the Bar Harbor Society Orchestra and the Broadway Syncopators, both exclusively Vocalion combinations….It is said, besides furnishing six records or twelve selections a month for the Vocalion list, his orchestra also accompanies most of the Vocalion artists in their recordings of popular songs….[H]e keeps three arrangers busy preparing effective and novel orchestrations.”

His status as an exclusive Vocalion artist ended on September 1, 1924. He began recording for Columbia, Paramount and the Plaza Music Company, which issued records on Banner and related labels. In 1926 and 1927 he also worked for Brunswick–he had last recorded for the company in 1922 before signing as an exclusive Vocalion artist. He continued to record for Vocalion, which became a Brunswick subsidiary in January 1925.

Page 70 of the February 1925 issue of Metronome announced that “The Famous Phonograph Orchestras Bureau has been organized with headquarters in the Publicity Building, 1576 Broadway, New York City. Associated in this enterprise are Charles Dornberger, Ben Selvin and George D. Lottman. Bookings are made for several of the orchestras that record for the phonograph companies, and a very satisfactory business is reported.”

Now with even closer business ties to phonograph companies, he vigorously attacked the new medium of radio, doing it in a way to make phonograph recordings seem a perfect product. Page 67 of the February 1925 issue of Metronome quotes a press release issued by Selvin: “Radio in its present stage is a menace to the artist who broadcasts; its publicity value dwindles into insignificance when compared to the harm that it does. I have decided to cancel all future broadcasting dates because I find that radio goes a long way toward impairing one’s reputation. The tonal balance perfected in the phonograph recording studios is utterly lacking in radio reproduction; some instrument always stands out as a rule over the air, to the complete exclusion of all the rest. I have investigated this condition intensively, but no amount of position- moving or special orchestrating seems to remedy it. The banjo, particularly, will often muffle the dulcet and sweet tones of the saxophone, and other instruments prove similarly offensive. Then, there is a harmful tendency on the part of many musicians, particularly amateurs, to ‘hog’ the air in their over-anxiety. This, combined with the very poor balance achieved by the broadcasting orchestra, makes radio music a really hideous thing. Until these evils are remedied, I, for one, am going to let the radio alone.”

He soon performed on radio again, presumably lured to the medium by a sufficiently lucrative contract. Page 60 of the March 1925 issue of Metronome states, “Ben Selvin has added three men to his Woodmansten [Inn] orchestra and will have nine musicians on the job for the coming season. Selvin is now broadcasting through station WFBH and is doing his own announcing.” That all of radio’s “evils” listed a month earlier by Selvin had been remedied so quickly is unlikely.

Page 128 of the November 1927 issue states, “The Columbia Phonograph Co. announces that it has secured a three-year contract with Ben Selvin and His Orchestra, by which this celebrated dance orchestra and its leader will record exclusively for Columbia. The first release under the new contract is a coupling of ‘Playground in the Sky‘ and ‘Wherever You Are,’ both…from the new musical comedy success, Sidewalks of New York. Ben Selvin has the distinction of recording the famous phonograph record of ‘Dardanella’ back in 1919, the record which sold more copies than any other up to the recent phenomenal success of Columbia’s ‘Two Black Crows’ records. Another early great hit of Mr. Selvin’s was ‘Three O’Clock in the Morning.’ Ben Selvin has recorded more than 3,000 selections for various phonograph companies in the past.”

This article’s claim that “Dardanella” was the industry’s best-seller prior to 1927 is probably not true though the disc was genuinely popular.

Joseph Lanza reports on page 46 in Elevator Music (St. Martin’s Press, 1994), “Selvin was Muzak’s chief programmer in its early years; he supervised its first New York City transmission in 1936 and had helped the company devise its first standardized programming.”

George T. Simon writes in The Big Bands (New York: Schirmer Books, 1981) about Selvin’s connection with James Caesar Petrillo, president of the American Federation of Musicians, who was worried about musicians being put out of work by radio broadcasts as well as jukeboxes reproducing music from records: “…[P]erturbed by the possible adverse effects of recording on his membership, he hired Ben Selvin, a highly respected recording executive and orchestra leader, to conduct a thorough study of the entire recording field as it affected musicians. Selvin’s report was exhaustive. Presented at the annual convention of the musicians’ union, it received a standing ovation from the delegates…”

Selvin argued against a ban on recording, pointing to other ways to address the problem of large numbers of musicians being unemployed, but Petrillo ordered that a ban go into effect on August 1, 1942. The ban was arguably a disaster for working musicians–for example, it contributed to the decline of big bands or the “swing” era–but in the end the major record companies did agree to pay the union a royalty for released records.

Around 1947 Selvin worked for Majestic Records as chief of artists and repertory. Late in life he worked for RCA, overseeing the popular RCA Camden reissue series. In the early 1960s, he was forced to retire from RCA at age 65. He became a consultant for 3M (Minnesota Mining and Manufacturing), a company that transferred recordings to audiotape. He recommended records to be transferred to the new tape medium. In the mid-1970s he was reunited with former Brunswick recording director Walter Haenschen (“Carl Fenton”) for a taped interview at Lincoln Center. The interview is part of the Haenschen collection at Ithaca College in upstate New York. 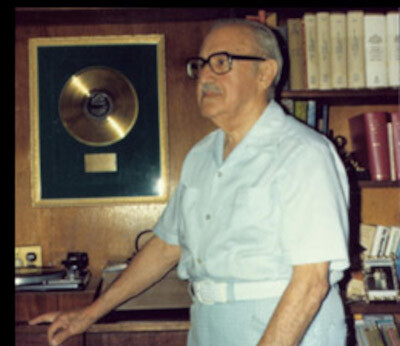 By Tim Gracyk, from the book “Popular American Recording Pioneers 1895 -1925.” If you would like to order a copy of this book, click here for details.

The photo of Ben Selvin on this page was taken by Alan Roberts, circa. 1977 in Manhasset, New York at the home of Ben Selvin. The gold record on wall is of 1919 recording of Dardanella. Thanks to Arthur Zimmerman for submitting the photo!