Ian Whitcomb was a fun person to be with. I believe it was in 1986 that we first met, at the Sedalia Scott Joplin festival. I was intrigued by his constant, humorous patter, his insightful observations, and his spontaneity. While not qualified to analyze the causes of his stammer, I had long thought that his mouth simply couldn’t keep up with the speed of his thoughts as they came pouring from his mind.

His idiosyncratic personality was clear in his performances and also comes across in his books. They are written with style and they move; they are fun to read. He did good research and he knew his subjects, but at times his artistic sense pushed the scholar aside and allowed his imagination to run loose. A great example is in one of the late chapters of his book on Irving Berlin’s ragtime years. He portrays Rasputin, the mystic advisor to the Russian tsar, as being ragtime mad, so much so that he was assassinated while listening to a test recording of the ODJB playing an Irving Berlin tune. I questioned Ian about this during a seminar at a ragtime event and he laughed: “Everyone knows that couldn’t be true.” It was fun to write and he simply couldn’t resist the idea.

At least one of his imaginative turns inspired me to dig further with my own scholarship. In that same book he muses about Irving Berlin and Scott Joplin passing each other on the staircase at 112 West 38th Street in New York, perhaps exchanging “ideas and raggy phrases.” Naturally, I had to ask Ian about this, and he pointed out that it was the address of Seminary Music, with which Joplin published from 1908–1910, and also Ted Snyder Music, where Berlin worked during those same years. They could have met on the staircase. 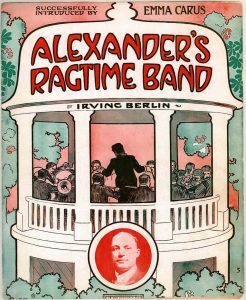 That piqued my curiosity and I went to the New York City Hall of Records to see if I could learn anything significant about the two companies. I had long known that Ted Snyder Music was run by Ted Snyder and Henry Waterson; the new discovery was that Seminary Music was owned by Mary Snyder and Mary Waterson. An item in a music magazine further revealed that the two companies shared the same office; they were, essentially, the same company. I realized then that the story told by Joplin associates connecting Joplin and Berlin—a story long-discounted by ragtime researchers as implausible—could be true.

The story has it that Joplin, in hopes of getting his opera Treemonisha published, had handed the score to Irving Berlin, who a few weeks later rejected it. After Berlin’s first megahit “Alexander’s Ragtime Band” was released, Joplin reportedly yelled “That’s my tune!” Joplin’s friend Sam Patterson identified the melody in question as coming from Joplin’s “Slow Drag”—actually, “A Real Slow Drag,” the closing number of Treemonisha.

The verse of the Berlin song does slightly resemble the “Marching On” section of that closing number, even though Joplin had altered it (according to his widow Lottie) before self-publishing the opera. As we don’t have Joplin’s original version, we have no way of knowing whether his music had been copied. But it’s clear that Joplin believed he had been wronged.

These discoveries were all an outgrowth of Ian spotting a coincidence and taking an imaginative leap. That’s one of the signs of genius.